The sixth CD in the Bach to Bloch series devoted to Jascha Spivakovsky features both broadcast and home practice recordings from the last decade of his career, bringing more insight into the artistry of a headlining pianist who regrettably never produced commercial solo discs.

Spivakovsky often opened his recitals with Bach, the Italian Concerto a particular favourite due to its uplifting mood. This 1962 broadcast performance captures the pianist’s trademark crystalline sonority and clarity of texture to perfection, his deft articulation and agile finger technique highlighting the contrapuntal nature of Bach’s writing. As always, Spivakovsky uses pedal judiciously to enhance tonal colour without obscuring passagework. The third movement is especially remarkable for its rhythmic vitality and clarity of left-hand figurations.

The 1966 Melbourne broadcast of Mozart’s Sonata in No.5 G Major K.283 is a fascinating reading that finds Spivakovsky playing with sensitivity and charm without sounding trite or quaint. His varied articulation and attention to note length are particularly captivating, as his accenting and semi-detached touch help to shape phrasing so as to underscore the innocent optimism of the music without sounding childish or simplistic.

The only surviving recording of Spivakovsky playing Schubert is a robust traversal of the Impromptu in E-Flat Major D.899 No.2. This home practice session ca 1963 recorded on his living room Steinway features tremendous sweep and momentum, with a clear singing line soaring above varying figurations, his precise fingerwork, accomplished accenting, and mindful timing serving to clarify the work’s structure. A breathtaking reading filled with heart!

Chopin’s Nocturne in F-sharp major, Op.15 No.2, was a great favourite of the Romantic pianists - it may be the most recorded Nocturne of that generation - and it was one of the two works Spivakovsky recorded in his sole Parlophone session in the 1920s (the disc was never issued). This 1966 TV performance from some 40 years later is noble and refined, with fascinating use of timing, the filigree fingerwork truly coloratura in nature, the phrasing and rubato both patrician and sensitive. The 1955 broadcast performance of the posthumous E Minor Waltz is notable for its glistening tone, vibrant rhythm, burnished melodic line, and defined harmonic support in the left hand.

Liszt figured prominently in Spivakovsky’s recitals but unfortunately not many recordings remain. The first to be presented in this series is the Hungarian Rhapsody No.15, a home practice session on his Blüthner prior to a 1963 TV broadcast (sadly lost). The pianist told his son that he kept the rhythm steady to sustain the march-like nature of the work (the ‘Rakoczy March’), and with crisp articulation, consistent voicing of motifs, and pronounced rhythmic pulse he emphasizes its revolutionary spirit as opposed to exhibiting mere pyrotechnics.

Schumann’s Piano Sonata No.3 in F Minor Op.14 (“Concerto without Orchestra”) played a pivotal role in Spivakovsky’s life and career: this work was the ‘quick study piece’ that he had to prepare without the aid of a teacher for the 1910 Blüthner Prize (he won at the tender age of 13). This 1963 Melbourne broadcast recording from over half a century later is overflowing with passion, featuring soaring phrasing and deeply forged baselines, while discreet pedalling and the skillful use of finger legato serve to burnish melodic lines. A reference reading of this rarely-performed masterpiece!

Cover artwork shows Jascha Spivakovsky surrounded by a crowd at the stage door in Christchurch, 1922. 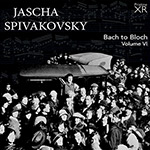