This fourth in our ongoing series of recordings by Jascha Spivakovsky offers a superb selection of recordings from a variety of sources, accompanied by excellent sleevenotes written for us by Mark Ainley, which details each performance.

From a technical point of view, once again there were a number of challenges to overcome, and recording quality was particularly varied. The opening piece, Bach's Fantasia in C minor, originated from an acetate disc Spivakovsky made in 1948. These were particularly delicate, designed for no more than a handful of replays before they begin to deteriorate, and are easily damaged. The disc in question was reasonably well preserved for its age, but there was some surface damage too severe to remove - I could only try to minimise its impact on the performance.

Thereafter we have a series of taped recordings made in different environments and with different microphones and equipment using different pianos on tapes of varying quality. In remastering these I have aimed for the best possible quality from each individual recording first and foremost, rather than trying to make each sound the same. This does mean there's a certain lack of continuity of sound, though of course not of performer. Happily the performances themselves are of such quality than any tonal jumps between pianos will quickly be forgotten as each new performance takes hold.

Finally, if you're wondering why this series is "From Bach to Bloch", it's simple: by the time we've finished, Bach will be the earliest composer in the series, dates-wise, Bloch the latest, with a whole lot of other fine music in between! 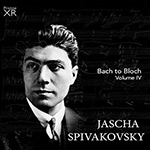 This fourth volume of solo compositions played by the Russian-born pianist Jascha Spivakovsky features an array of recordings made over a nearly two-decade period from both radio broadcasts and home performances, revealing astounding pianism from a remarkable artist who, despite a brilliant concert career, never made commercial solo records.

As with the Bach works featured on Volumes 1 and 2 in this series, Spivakovsky’s 1948 account of the Fantasia in C Minor showcases his crystalline sonority, rhythmic vitality, and transparent voicing. Jascha was not one to give academic performances, and his spirited pianism is on display here with vibrant momentum without any compromise in rhythmic precision.

Five Beethoven Sonatas were released in earlier volumes and we now get to hear Spivakovsky’s impassioned Sonata in A-Flat Major Op.110 from a radio broadcast ca.1952. The first movement is clearly textured and beautifully polished, with singing tone, pristine balance between voices, and some dramatic strokes that emphasize the structure of Beethoven’s writing. The brisk second movement features tightly voiced chords, with accents adding gravitas and emotion while lyricism is sustained in the melodic line. The opening Adagio ma non troppo of the third movement is reverentially played, while the voicing of the fugal writing of the Allegro ma non troppo is exquisitely clear, the magnificent interplay of voices building as the work draws to a climactic close.

The Chopin selections presented here are some that Spivakovsky would occasionally group together in his actual recital programs. First is a radio broadcast ca.1955 of the Impromptu No.1 that bubbles with rhythmic verve and momentum while balancing fluid phrasing and crisp precision. Then, three Etudes recorded in 1963 on Spivakovsky’s own Steinway feature magnificent playing that is appreciable despite the somewhat distant microphone placement. Jascha believed that the ‘Revolutionary’ Etude Op.10 No.12 was often played as a ‘fortissimo frenzy’ because of its name; with mindful timing and attention to dynamic variation, Spivakovsky builds passion and tension while sustaining clarity in both hands so as to emphasize the work’s lyrical and emotional dimensions. The Etude Op.25 No.2 features more of Jascha’s poised voicing, each note in the left hand becoming part of a long line while the figurations of the right hand are beautifully shaped. The ‘Butterfly’ Etude Op.25 No.9 has a delightful bounce that brings great rhythmic vitality to his reading, the melody consistently phrased across the octaves in the right hand.While the Bolero Op.19 is not one of Chopin’s most popular works, Spivakovsky’s 1966 home performance is superb, its expansive phrasing and elegant timing highlighting the work’s lyrical richness and dancelike nature: what joy and charm emerge with his well-defined articulation and tasteful rubato!

The pinnacle of this release is a 1954 broadcast recording of Schumann’s Carnaval, a towering performance that characterizes to perfection the varied moods of every movement (albeit occasionally punctuated by car horns outside the Melbourne radio studio). Lyrical sections are fluidly phrased and emotively timed while more playful movements feature a rhythmic lilt and deft articulation, each piece brought to life through Spivakovsky’s musical intellect and responsive pianistic mastery … a thrilling conclusion to another series of stupendous performances by a master pianist of the Romantic tradition.