This release of the Russian-born pianist Jascha Spivakovsky features recordings of four pivotal Beethoven Sonatas from key periods of the composer's output. Spivakovsky had a great affinity for Beethoven and his daring yet poetic readings demonstrate a fusion of passion with classical structure that mirrors the pianist's modern approach to Romanticism at the keyboard, whereby the heart of the score is revealed through transparent textures, a polished singing sound, and attentive voicing.

"Last night's concert at the Town Hall would be belittled If it were described merely as a piano recital. It was an experience of mind and spirit and a sincere artist's submergence of self and technical awareness into the world of Beethoven"
Sir Neville Cardus, Sydney Morning Herald, 1947

"From whatever angle one viewed the performance it was stamped with unmistakeable signs of rarity and greatness ... I have never seen an artist sit at the keyboard with less apparent concern for its existence other than as a medium for the realisation of a long-matured imaginative conception. So inflexible is Spivakovsky's mental control that not a bravura passage in all the four sonatas escaped its relationship to the interpretive whole"
John Sinclair, The Herald, 1947 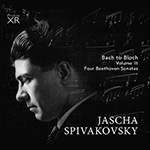 This release of the Russian-born pianist Jascha Spivakovsky features recordings of four pivotal Beethoven Sonatas from key periods of the composer’s output. Spivakovsky had a great affinity for Beethoven - a rare life mask of the composer adorned the wall of his music room - and his daring yet poetic readings demonstrate a fusion of passion with classical structure that mirrors the pianist’s modern approach to Romanticism at the keyboard, whereby the heart of the score is revealed through transparent textures, a polished singing sound, and attentive voicing.

Spivakovsky’s 1967 home recording of the Pathétique Sonata on his 1910 Blüthner captures the pianist’s crystalline tone and clarity of texture to perfection. The pianist plays with considerable gravitas, with the slow opening featuring passionate emphasis of chords. However, the textures remain lucid, chords always being transparently voiced and pedal being applied sparingly to allow melodies to be clearly heard, the drama of the work being expressed without ever becoming weighty. The second movement demonstrates Spivakovsky’s “modern Romantic” approach, with phrases elegantly formed and burnished, rubato minimally applied and only at key transition points. The final movement features precise fingerwork, singing tone, and consistent phrasing of the melodic line even as it alternates between hands. The 70-year-old Spivakovsky’s technical facility is impressive in its clarity and rhythmic momentum even at a rapid tempo, resulting in a most thrilling and fulfilling interpretation.

In this 1958 radio broadcast of the Moonlight Sonata, Spivakovsky plays with his trademark directness and transparency to reveal the beauty of the score, eschewing exaggeration without sacrificing depth and impact. His treatment of the first movement is notable for its clarity and purity of sound, the singing melodic line lushly phrased, impeccably balanced with the countermelodies in the left hand. Sparse use of the pedal with careful finger legato (even in octaves) helps to sustain clarity and Spivakovsky only occasionally employs rubato, thereby giving each nuance of timing that much more impact, resulting in a serene, beautiful, yet clear reading of the famous first movement. The second movement has a wonderful lilt that highlights its dancelike charm, while the third couldn’t be more of a contrast with its brisk tempo and volcanic accents. Despite his tremendous speed, Spivakovsky plays each note with crisp precision, and his accents on the upper chord of each run provide impact without ever breaking the line or beauty of tone, bringing drama and excitement to the performance. It is worth noting that the pianist articulates each note in the left hand accompaniment, rather than blurring them with the pedal, thereby revealing the harmonic undertone of the work while adding more tension.

This 1957 broadcast recording of the Les Adieux Sonata finds Spivakovsky playing with his usual clarity of phrasing and harmonic structure to highlight the work’s evolving emotional content. The pianist captures Beethoven’s feelings at the departure of his friend Archduke Rudolph in the work’s first movement with dramatic emphases that never break the line, subtle adjustments of tempo, long phrasing, deliberate variation in articulation to add dimension, and refined tonal and dynamic gradations. Spivakovsky portrays the sadness of the second movement, which Beethoven called “Absence”, with tender lyrical phrasing, more pronounced peaking and expansion of phrases, and a broad dynamic range that never sacrifices sensitivity. The great contrast in the opening of the third movement is achieved by the pianist’s ebullient treatment of its first measures, with an adventurous tempo that he sustains throughout as the joyful atmosphere continues with the return of the Archduke. The runs are thoroughly dashing with their crisp precision and attentive dynamic shifts, while the transition between legato phrasing and more detached articulation reflects the interplay of Beethoven’s various joyful emotions.

Spivakovsky was justly renowned for his performance of Beethoven’s Sonata Op.111, heard here in a home recording made on the pianist’s Steinway around 1966. The famous British critic Sir Neville Cardus wrote to the pianist to praise his 1945 Sydney performance of the work, stating that “it was far more than an experienced piece of piano-playing. You entered into the sublime world of the work with an intent, unself-conscious eloquence which brought me close to tears.” The reading presented here reveals the pianist’s masterful understanding of the complex composition, with carefully voiced chords, subtle accenting, dynamic contrast, and burnished melodic lines. Notable in the first movement is Spivakovsky’s uncanny ability to terrace voices and motifs with transparency, which serves to reveal the structure of the composer’s contrapuntal writing; his powerfully defined octaves are also very impressive, as are his varied dynamic gradations and tonal colours. The opening melodic theme in the second movement is lovingly forged with minimal pedalling and clear finger legato enables the line to soar with profound resonance. Spivakovsky’s transcendent technique and mature pianistic vision enable him to traverse the movement’s varied moods and elements unfettered, with a free rhythm and more relaxed articulation in the ‘proto-jazz’ dance-like sections and serene legato phrasing in lyrical passages, his layered voicing enabling both treble and bass registers to heard equally and his dynamic control bringing the inspired work to a tranquil close. The chief critic of The Herald in Australia, John Sinclair, praised Spivakovsky’s Op.111 by writing that “recalling its performance today, I have the choice between futile and inadequate language and silence. The overtones are still too powerful in my ears to allow of objective comment.”