"Dorfmann conceives the "songs" as salon pieces and, of course, in many cases this is the right approach. She presents the music in a dainty, delicate framework and has been well recorded" - The Gramophone, 1957

It is unfortunate that Ania Dorfmann is remembered today almost exclusively for being the soloist in Arturo Toscanini’s only studio recording of a Beethoven piano concerto.  Her career extended far beyond the Maestro’s orbit, as the present reissue demonstrates.

Dorfmann was born in Odessa in 1899 to a merchant’s family.  Recognized early on as a prodigy, she played her first recital at the age of eleven.  Around this time, she also gave a joint concert with the even-younger Jascha Heifetz.  Plans were made for her to go to Paris to study with Isidor Phillip at the Conservatoire, but the death of her father postponed the trip for several years.  She had been in Paris for less than a year when revolution broke out in Russia.  After a visit home, she was only able to return to France with some difficulty.

She made her début at Liège in 1920, and concertized throughout Europe over the next fifteen years, appearing with such conductors as Mengelberg, Beecham and Wood.  During this period, she made a number of recordings for English Columbia, including the Mendelssohn First Piano Concerto with Walter Goehr.

In 1936, she made her American debut at Town Hall in New York, where critics praised the “rapidity and clarity” of her technique.  Horowitz introduced her to his father-in-law, Toscanini, and she soon became an intimate of the family.  (A letter written by Toscanini in Milan in April, 1937 mentions “Ania, that friend of Volodya’s (she’s a Russian pianist).  She’s here all the time, morning and evening.”)  She was later to collaborate with the conductor on four occasions, all in works of Beethoven:  the Choral Fantasy (1939); the Triple Concerto (1942); a broadcast of the First Piano Concerto with the Reineke cadenza (1944) followed by a studio recording of the work with one of Beethoven’s own cadenzas (1945).  All of these have been available on CD.

Dorfmann settled in America and joined the faculty at the Juilliard School.  She continued to concertize and made a number of recordings for RCA Victor during the 1940s and ‘50s, including the Beethoven “Moonlight” and “Pathétique” Sonatas, the complete Chopin Waltzes, the Albums for the Young of both Schumann and Tchaikovsky, the Grieg Piano Concerto and Mendelssohn Concerto No. 1 with Erich Leinsdorf and the Robin Hood Dell Orchestra of Philadelphia (on Pristine PAKM 066), Schumann’s Carnaval and Fantasiestücke (the former also on the same Pristine release), and a recital disc featuring works by Liszt, Ravel and Menotti among others.  While her English Columbia 78s have been well covered in CDs from Pearl and Dutton, her RCA recordings have remained largely unreissued.

Mendelssohn remained something of a Dorfmann specialty throughout her career.  After her early recording of the First Concerto, she included two of the Songs without Words along with the Andante and Rondo Capriccioso in a 1953 recital album for RCA.  She later re-recorded the two Songs along with the other 47 for a three-LP set, which became only the second complete recording of the work, following Ginette Doyen’s for Westminster.  Critic Jonathan Summers wrote that Dorfmann’s set “shows much sensitivity and fine tonal playing.”

Dorfmann continued to teach until a year before her death in 1984, having retired from the concert stage several years earlier.  Now, with the reissue of her later recordings such as the ones presented here, a fuller appreciation of her considerable artistry becomes possible. 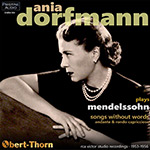 Another large-scale piano set, this one from Victor, is in three more discs and features Ania Dorfmann in all of Mendelssohn's Songs Without Words. The playing is agreeable. Dorfmann conceives the "songs" as salon pieces and, of course, in many cases this is the right approach. She presents the music in a dainty, delicate framework and has been well recorded.

Ania Dorfmann perhaps is best remembered for her collaborations in Beethoven with Toscanini. She was highly adept, though, in the Romantic repertoire. In November RCA rereleased her Living Stereo Schumann album, containing a bravura Carnaval and a provocative Fantasiestücke. Her 1953 partnership with Erich Leinsdorf in marvelous accounts of the Grieg Concerto and Mendelssohn’s First Concerto is available from Pristine and, in decent sound, on YouTube. Dorfmann definitely was a pianist who followed her own muse. One can hear this in her 1939 performance of Beethoven’s Choral Fantasy, where she plays with freedom and elasticity while Toscanini’s direction is rigid. Dorfmann had a large sound and a big personality, which come through both in her Schumann recital and in the present release of Mendelssohn’s Songs Without Words. In the Mendelssohn she presents the best of Russian-American culture, inhabiting each of the pieces with warmth and decisiveness. Her reading in general is rather relaxed. Even in the faster pieces there always is room for a breath or a rubato. She does not play as slowly as Walter Gieseking in his delightful collection of 17 of the Songs Without Words. On the other hand, Dorfmann’s playing is worlds away from Daniel Barenboim’s in these works. His sound is as beautiful as Dorfmann’s, but interpretively he is somewhat glib. Dorfmann clearly treasured these pieces from her early days as a prodigy. Her complete recording permits us to inhabit a lost world of European culture, both gentle and passionate. For Dorfmann, playing the Songs Without Words is akin to an actor taking on Hamlet. It is an accomplishment she chooses to be measured by.

In the very first song, Dorfmann catches the allusion to the opening prelude of the Well-Tempered Clavier of Bach, one of Mendelssohn’s great loves. One can imagine the pianist in a candlelit parlor at night, with Mendelssohn’s music her sole companion. In the “Hunting Song,” op. 19/3, Dorfmann elicits a symphonic richness of color, portraying a hunting party at full tilt. The first “Venetian Gondola Song,” op. 19/6, reminds us that Mendelssohn was a fine painter. We can see the sunlight shimmering on the water, with shadows overtaking the gondola as it passes through the canals. Here is elegance along with a feeling of tristesse. The next “Venetian Gondola Song,” op. 30/6, is almost a blues number, a lament for lost youth and beauty. Dorfmann colors the trills in the right hand to give them some edginess, which matches the composer’s equivocal feelings about the things of this world, an attitude Glenn Gould described as “neo-devotional.” “Duetto,” op. 38/6, finds Dorfmann taking a relatively brisk tempo, allowing the melody to pass between both hands to create a sense of intertwined joy and ecstasy. In “Folksong,” op. 53/5, Dorfmann emphasizes primary colors in the forte passages. Here Mendelssohn takes on the mantle of Carl Maria von Weber, mixing Romanticism with a more timeless sort of music.

Dorfmann really lets the “Funeral March,” op. 62/3, breathe, with sighs alternating with sobs of grief. You can imagine a whole procession in black. In the third “Venetian Gondola Song,” op. 62/5, a breeze causes ripples in the water and sends the passengers’ hair fluttering. Here beauty is balanced against a more threatening sensation. Dorfmann is very straightforward in the “Spring Song,” op. 62/6, not permitting any hackneyed emotion to arise. Op. 67/2 is marked leggiero or “nimble.” Dorfmann’s fingers suggest the entire spirit world, from elves to the specter of death. In op. 85/4, she exquisitely avoids sentimentality, while bringing a tear to the eye through genuine pathos. Dorfmann takes one of Mendelssohn’s most beautiful melodies in op. 102/2 and gives it a long, singing line, with freedom in tempo that scarcely draws attention to itself. In addition to the canonical 48 Songs Without Words, Dorfmann adds the Boat Song, op. posth., which scholars believe the composer intended for another volume of the Songs. In this performance, one can hear the oar gently splashing the water. As a bonus, Pristine has included Dorfmann’s 1953 recording of Mendelssohn’s Andante and Rondo Capriccioso. Dorfmann brings out its Midsummer Night’s Dream aspects with sparkling playing.

Mark Obert-Thorn has judiciously remastered the 1955–56 mono sound of the Songs, leaving in a fair amount of tape hiss to allow for a natural resonance from the recording. It would be interesting to know if RCA possesses stereo tapes of these sessions. The titles of the songs given on the back of the album mainly were created by Mendelssohn’s publishers, without his approval. A list of the works with their tempo markings and those titles that the composer did approve may be found on Wikipedia. For stereo recordings of all these works, I would recommend Martin Jones’s collection of Mendelssohn’s complete solo piano music. He actually recorded the 48 Songs Without Words in a single day! Ania Dorfmann’s reputation should be greatly enhanced by the issuing of these CDs on Pristine. They allow us insight into the heart and mind of a very important artist. The album represents a key moment in the history of piano playing in the 20th century.