Following on from the well-received first volume, this second release by Jascha Spivakovsky continues to concentrate on his solo work. The present recordings were made by Jascha during rehearsals for concerts and broadcasts in Australia in the 1950s and 1960s, and were recorded by Michael Spivakovsky onto a mono Tandberg reel-to-reel tape recorder using a standard-issue microphone. They were not therefore intended for release, and it has been my task to elevate the quality of the recordings to a standard which not only is acceptable to modern listeners but also does full justice to Jascha Spivakovsky himself.

Using the most up-to-date audio restoration and remastering software, I've been able to correct pitch anomalies, compensate for the tonal inaccuracies of the microphone, eliminate electrical hum, greatly diminish tape hiss, and digitally "rehouse" Jascha in one of the more intimate concert halls at Santa Cecilia, Rome, renowned for fine musical acoustics which complement the piano's tone, without introducing a wash of unnatural reverberation.

This page can only serve as an introduction to the incredible musical story of Jascha Spivakovsky - for a fuller picture I strongly recommend you visit www.jascha.com and immerse yourself in an amazing musical voyage of discovery. 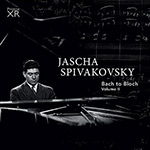 In his dramatic 1962 performance of Bach’s famous Chromatic Fantasia and Fugue in D Minor, Spivakovsky uses the Busoni edition, to which he adds a number of small amendments of his own, primarily doubling some notes and adjusting registers so as to highlight a climactic phrase. As with the Bach-Liszt work featured in Volume 1, Spivakovsky’s transparency and precision reveal the structure of the work with astounding clarity through his attentive voicing, varied articulation, and subtle nuancing. Pedaling is used with the utmost subtlety to sustain sonorities and clear them at the right moment, adding gravitas and drama to the reading. While trained in the Romantic tradition, Spivakovsky takes a remarkably direct approach to Bach, although he applies rubato and tempo adjustments at connecting passages to draw attention to shifts in musical direction and structure (notice the extended trills and the occasional delay at the end of a phrase). The idiomatic declamatory oratorial style of Bach’s writing is underscored in the mindful emphatic voicing of key musical phrases and with a natural rise-and-fall cadence, presenting phrases as if they were sung by the human voice. Spivakovsky’s full-bodied sonority exploits the varied tonal and dynamic range that both the piano and this arrangement make possible, his comprehensive technique used solely to reveal the character and structure of the work. As the Neue Preußische Zeitung in Berlin stated in 1925, "he filled Bach's Chromatic Fantasy and Fugue with vital substance.”

Spivakovsky’s 1966 account of Mozart’s Sonata in F Major is a robust interpretation that reflects the revolutionary spirit of the composer’s writing. The pianist did not view Mozart’s music as effeminate or dainty (as did many of his contemporaries and as do some present-day pianists), playing instead with directness and strength fused with the utmost sensitivity. Indeed, The Age in Melbourne stated in 1947 about the pianist’s playing of this sonata, “With so many pianists essaying sonatas on Mozart, it was a rare pleasure to hear the recitalist declare the master's excellence free from blemish and with the charm associated with his name.” Spivakovsky is clean and precise in his delivery while his discreet pedaling, seamless finger legato, and defined articulation are extremely sensitive while being neither delicate nor flowery. Voicing is beautifully balanced between the hands and the crispness of articulation is varied to give shaping to phrasing. The first movement features crystalline phrasing and transparent voicing together with pronounced accenting that nevertheless does not break the melodic line. In the second movement we hear an ideal balance of finger legato and detached articulation brilliantly used to shape the phrasing, while the mood shift brought about by a change in key from minor to major is underscored through a slight dynamic and tempo increase. The vitality of the closing movement is remarkable, with Spivakovsky’s impeccable dexterity and rhythmic precision (he was in his 70th year at the time) moving the work forward in its optimistic spirit. A bold and dramatic yet attentively nuanced reading of a classical masterpiece.

Beethoven-d’Albert: Ecossaises in E-Flat Major Wo.083

Recordings from February 1967 find the 70-year-old Spivakovsky playing two Beethoven ‘encores’ with his full range of pianistic skills to highlight their charm and humour. The delightful bounce and ebullient rhythm in the d’Albert version of the Ecossaise, which the pianist often played as an encore, bring to the work an utterly infectious charm. Even in what might be considered a trifle, Spivakovsky’s musicality is on display, with attentive and creative tempo adjustments serving to bridge different sections while his varied articulation and clear voicing shape phrasing and give dimension to the character of the work.

The Mail in Adelaide stated in 1922 that "Nothing more deliciously exquisite has been heard at any of these recitals than Beethoven's wonderfully graceful Rondo in G Major” and in this reading of that work 45 years later, we hear delightfully clear runs and trills, rhythmic vitality, and poised voicing, all with the pianist’s glowing sonority and crystalline transparency.

The 1955 recording of Chopin’s famous Fantaisie Impromptu may be one of the most impassioned on record, finding Spivakovsky at his most bold and impetuous. Some listeners might be taken aback by this fiery reading, but it is worth noting that the pianist is following the score precisely (he was using the Peters edition), from tempo indications to pedal markings. That said, the performance is also imbued with an individual approach to voicing and rubato - as was expected from pianists trained in the Romantic tradition - as well as with other pianistic hallmarks of the period: beautiful tone, crafted phrasing, balanced voicing between hands, and the highlighting of left hand harmonic support. For all the depth, power, and momentum in this interpretation, there is an abundance of subtlety and sensitivity that listeners primarily focused on Spivakovsky’s tempo and boldness might miss because they are so used to more sentimental readings of this famous work. Particularly noteworthy is the pianist’s attention to connecting phrases and sections, where the last note of one phrase is of consistent tonal colour and dynamic level as the first of the next, particularly noticeable as he enters and leaves the middle section. The soaring melodic line in the middle section, while despatched with directness and an absence of sentimentality, is brimming over with emotion through its clarity and skilled adjustments of tone, dynamics, and timing. As can always be expected in a Spivakovsky performance, rubato takes into account the structure of a phrase and its location within the overall work and is used to draw attention to a key musical element or to prepare the listener for what is coming next. A thrilling reading that emphasizes both the ‘fantaisie’ and spontaneous ‘impromptu’ aspects of the composition’s title.

Spivakovsky’s November 1963 reading of Chopin’s famous ‘Funeral March Sonata’ is one that demonstrates his insightful and individual approach to the Romantic repertoire. The pianist looks to the score without letting traditional performances colour his perspective, thereby forging a fascinating vision of the opening movement. He chooses to express the composer's Agitato marking by creating a mood that is more introspectively nervous as opposed to externally dramatic and anguished, beginning that section at a slower tempo and using minimal pedal, applying a relatively dry, unsettling staccato touch. He slowly evolves the sound, using more pedal and accelerating the tempo, while observing the rests between the 2- and 3-note slurs in the melody, while his pedaling follows the breaks in the Cortot edition. Spivakovsky's striking opening stays with us, colouring his performance and preparing the the way for his many other personal touches through the movement, where he uses more pronounced pedal with his lyrical phrasing, as well as his identifiable rubato to transition carefully between phrases and sections. The second movement is notable for the attentively voiced chords and octaves, with glistening tone in the upper register, as well as his beautiful legato phrasing and expansive rubato - The News in Adelaide wrote in 1933 that “his manipulation of the Scherzo was amazing, and he plumbed the very depths of emotional playing.” The famous Funeral March theme of the third movement is richly voiced and played in a straight tempo that communicates its solemnity, with the middle Trio played with a more richly coloured melodic line and expansive rubato, with the return to the Funeral March theme being subdued and appropriately melancholic. The Finale is played with fantastically deft finger-work and phenomenally consistent voicing, with careful pedaling and adjustments to dynamics and attack serving to create an atmosphere that The News had called “ephemeral, fleeting, and eerie” and bringing to a close a boldly original and inspired reading of a great Romantic masterpiece.

There is wonderful stuff here, including a magisterial reading of the Bach-Busoni, grandly paced, and glowing with that “golden age” sonority

Pristine’s reissues of these recordings of this Russian-born pianist (volume three, featuring Beethoven sonatas, is on the way) are creating a bit of a stir among pianophiles, especially those with an interest in historic performances. More than a few respected critics are hailing Spivakovsky as a heretofore unknown giant of the keyboard, taking his place alongside Horowitz, Richter, Argerich, and so on. Fanfare critics Colin Clarke and Jim Svejda both offered high praise, with qualifications, for Volume 1.

As both of my colleagues have pointed out, these are not commercial recordings, but rather homemade ones by his son, in post-World War II Australia, where Spivakovsky spent most of life. His biography is tragic in many ways, but also heroic in a made-for-Hollywood kind of way. He was born in 1896 in Kiev to a legendary family of Jewish musicians, and barely survived the Odessa pogrom of 1905. Despite his early fame as a prodigy, his family decided to flee the virulent anti-Semitism of Tsarist Russia and landed in Berlin, where Spivakovsky continued his education at the highest level. As a mature soloist, he performed with such podium masters as Furtwängler, Strauss, Knappertsbusch, Szell, and Monteux. In 1937, for the second time in his life, he escaped persecution with bullets flying over his head. He became a proud Australian citizen in 1938, where he died in 1970.

Here’s the rub; for reasons unknown, he did not make recordings. These three CDs may constitute his only legacy. It’s puzzling; it is true that Australia did not have much of a recording industry at the time, but he continued to concertize regularly after the war, with visits to Europe and America, including a Carnegie Hall recital. One would assume that as a major performer he had some kind of agent representing him. Was he afraid of the microphone? We may never know.

Svejda concludes that we cannot judge Spivakovsky’s place in piano history on the basis of these handful of amateur recordings, and I have to agree. There is wonderful stuff here, including a magisterial reading of the Bach-Busoni, grandly paced, and glowing with that “golden age” sonority (kudos to Pristine restoration maestro Andrew Rose for extracting that from the original tapes). The Mozart is buoyant and brilliant, the Beethoven confident and richly voiced. I was not bowled over by this Chopin, however, beginning with an overly brusque Fantaisie-Impromptu. The sonata opens oddly, with an overly broad tempo and lurching rhythms. Once he settles down, this is very strong, recalling the freedom and imagination of Rachmaninoff’s fabled recording.

So, we have here a glimmer of artistic greatness, and an incredible story. Maybe Spivakovsky was one of the greatest pianists in history, but unless a new trove of undiscovered recordings comes to light, there is simply not enough evidence here to substantiate such a grandiose claim. I would certainly look forward to the movie biography, however.