"We have here one of the finest cycles of Bach's forty-eight ever recorded, surpassing Fischer, Richter, Gould, and most others" - Fanfare, 1994

These recordings were recorded in Moscow for mono LP release by Melodiya between 1958 and 1961. Since then their legend has only grown - by 2010 they were listed alongside versions of the Well-Tempered Clavier by Edwin Fischer (Pristine PAKM001) and Andras Schiff in Gramophone magazine's 250 greatest classical recordings, despite their intermittent and limited availability.

In preparing them for this release I've endeavoured to both clarify and fill out the rather flat sound of the original through XR remastering, bringing a greater sense of clarity to the sound. The instrument itself feels more solid with the application of pitch stabilisation, which has worked both on issues of flutter and more long-term pitch instability.

Ambient Stereo processing, when chosen, makes a good job of extracting the room ambience from the original recordings and giving it dimension, whilst retaining the mono image of the piano itself, and is my recommended listening format. 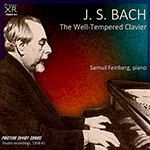 This is now my performance of choice for this work. Its legendary status among keyboard cognoscenti is fully deserved

I have been known to say that I’m even happy to have Bach played on a kazoo, just so that someone, somewhere, is playing Bach. But while I do delight in having Bach played in any form, I also have decided preferences. When it comes to the works for clavier, while I cheer on every pianist who takes them in hand, my own Bach collection—with the exception of Glenn Gould’s classic 1955 account of the Goldberg Variations—contains only performances on the harpsichord. At least, it did until now. When the weekly email advertisement arrived from Andrew Rose of Pristine Audio, announcing this set as his latest release, I read through it as a kind of curiosity item and then clicked on the attached sample audio file. About 30 seconds later I was pounding out an email to Joel Flegler, begging for a review copy to be sent to me, as I stared at my computer speakers in dumbfounded amazement.

Several weeks later, after receiving this set and listening to it multiple times, I can still find myself staring at my stereo system speakers in dumbfounded amazement. Simply put, the playing here is interpretive genius of the highest order. While obviously possessing the powerful, deep-in-the-keys touch of the Russian school of pianism, Feinberg is first notable for the light restraint he employs throughout the cycle of 48 pieces instead, with very sparing use of any pedals. There is also a limpid fluidity that maintains momentum through gracefulness of flow rather than driving rhythm. Not that a keen sense of rhythm is absent; another facet of Feinberg’s playing is extraordinary rhythmic clarity. Without any need for exaggerated accent, he always subtly conveys the downbeat of every measure, maintaining the metrical pulse so necessary to Bach’s music. While tempos are generally brisk, they are never rushed or hectic. A third remarkable feature is Feinberg’s uncanny ability to bring out every polyphonic line and fugal voice in perfect balance to every other one, so that the structural clarity of Bach’s work is as brilliantly refracted as light through a flawless diamond. Finally, while some previous commentators (Allen Evans in 18:2 in these pages, Jonathan Woolf on MusicWeb International in July 2006) have remarked on Feinberg’s extensive use of rubato and ritards, I find the application of those to be relatively restrained compared to some other pianists and invariably well judged. (Feinberg does tend to take the second half of a prelude or fugue slightly slower than the first half, and to apply most of his agogic touches and tempo adjustments there, perhaps as an alternative to the ornamentation that a harpsichordist might add instead.)

The foregoing can be illustrated with references to some particular instances. Right at the start, in the iconic C-Major Prelude of Book I (CD 1, track 1), Feinberg immediately avoids the trap into which so many performers fall of trying to vary the succession of pairs of ascending three-note arpeggios by inserting unnatural pauses or accents; instead, he merely adds just a touch of extra weight to the first note of every six-note group to establish the pulse and keep the flow uninterrupted. The C♯-Minor Fugue of Book I (CD 1, track 8) is a sterling example of his ability to maintain an absolutely steady sense of rhythm with a clear downbeat pulse but no hint of metronomic rigidity. Any question as to his ability to dash off rapid passage-work is immediately laid to rest by his sparkling accounts of the C-Minor and D-Major preludes of Book I (CD 1, tracks 3 and 9). In the C♯-Major Fugue of Book I (CD 1, track 6) he adroitly brings out the dance rhythm underlying the overlapping fugal voices, and also provides a typical occurrence of his adjusting the latter part to a slightly slower tempo. The immediately succeeding C♯-Minor Prelude (CD 1, track 7) is a model instance of his ability to apply subtle agogic touches for expressive effect. In the A-Minor Fugue of Book I (CD 2, track 16), Feinberg maintains an unflagging sense of momentum, with a brief but magical touch of dynamic shading down to piano shortly after the 3:00 mark, and a marked but entirely appropriate ritard at the end. The monumental B-Minor Prelude and Fugue that close Book I (CD 2, tracks 23 and 24) have the sense of cumulative finality and closure that can come only from a superb architectonic balance of the 22 preceding numbers. Both the C-Major Prelude that opens Book II (CD 3, track 1) and the F ♯-Major Prelude that opens that book’s second half (CD 4, track 1) are oases of spiritual serenity. The E-Minor Fugue of Book II (CD 3, track 20) displays Feinberg’s pointed rhythmic sense, while the B-Major Fugue (CD 4, track 22) demonstrates his abilities both to balance fugal voices and to distinguish them from one another with an adroit use of accents.

Who, then, was Samuil Yegenyevich Feinberg (1890–1962)? Born in Odessa, he entered the Moscow Conservatory, where he was a pupil of Alexander Goldenweiser for piano and of Nikolai Zhilyayev for composition. After graduating in 1911, he began a career as a concert pianist, winning praise from Scriabin for his performances of the latter’s compositions, and in 1914 he presented the first complete concert performance in Russia of Bach’s WTC. In 1922 he joined the faculty of the Moscow Conservatory, where he stayed until his death. While remaining active as a concert pianist, he also composed three piano concertos, 12 piano sonatas (recorded complete a decade ago by Nikolaos Samaltanos and Christophe Sirodeau for BIS), and a number of shorter piano works, and also created numerous transcriptions for piano of works by a variety of composers ranging from Frescobaldi to Borodin. In addition to his Bach recordings (which go beyond the WTC), he is particularly noted for the ones he made of Scriabin’s music. Feinberg’s own thoughts on interpretation can be found at brightcecilia.com/forum/showthread.php?t=2994 and arbiterrecords.org/catalog/samuil-feinberg-in-sound-and-thought/.

Pristine dates these Melodiya recordings to between 1958 and 1961; the web site of the International Feinberg-Skalkottas Society and other sources date them to 1958–59. They are in decent monaural sound, slightly boxy and with a bit of residual hiss. There have been previous CD issues on Russian Disc and Monopole; I have not heard any of those issues, but previous experience with those labels gives me the confidence to say that Andrew Rose has surely produced a much superior edition, and those other ones are no longer available in any case. The CDs themselves (packaged in two sets of slimline two-CD cases) only come with track listings on back tray cards, and a brief front tray insert with a reproduction of a photo of Feinberg at the piano and the aforementioned Allan Evans review; as is usual with Pristine Audio, additional notes are to be found online at the web site. Those who prefer to pay for online downloads also can get a free copy of a score of the WTC with that. (Sorry, no fries or supersize instead.)

I never imagined that I would ever prefer a pianistic version of Bach’s WTC to one played on a harpsichord; but, unless and until I find a harpsichord rendition that works the same kind of magic as does Feinberg, this is now my performance of choice for this work. Its legendary status among keyboard cognoscenti is fully deserved, and I am honored to have the opportunity to place it both in the Fanfare Classical Hall of Fame, and on my 2014 Want List. Truly extraordinary, indeed!

James A. Altena
This article originally appeared in Issue 38:3 (Jan/Feb 2015) of Fanfare Magazine.