Listening to these three recordings it's not difficult to distinguish the sonata recorded in 1954 from those recorded two years previously. The overall tone of Sonata 27 has a richer quality than I've been able to bring out in Sonatas 28 and 29, and in its original review in The Gramophone (not quoted here) the reviewer ends with an observation that: "The whole of this disc is very well recorded", something of a contrast to the criticism directed at the Hammerklavier recording.

The latter sounds, to modern ears, especially flat and boxy, with a very limited lower extension which appears almost to hollow out the sound of the piano. The result is indeed a recording which suggested a much poorer performance than Backhaus actually gives as it minimises the impact of both the dynamic range of his playing and the subtleties therein.

In all three sonatas in this volume I've been able to enact a dramatic transformation in the sound of the piano, despite almost constantly having to fight against multiple shortcomings in the original recordings, something that has been a constant throughout this series. Pitchwise, apart from a sag during the first movement of Sonata 28, these were generally fine. But in the recovery of piano tone I've had to lift a lot of tape "shash" into the realms of audibility - and then try to suppress this whilst retaining the piano. By and large this has been a successful mission, but at times one may still be reminded of the vintage of these recordings. 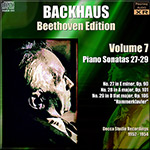 For collectors interested in late-period Beethoven, what Backhaus has to say is important

These discs were originally Decca studio recordings made between 1952 and 1954—No. 27, op. 90, No. 28, op. 101, No. 29, op. 106—and between 1950 and 1953—No. 30, op. 109, No. 31, op. 110, No. 32, op. 111. They constitute, respectively, Volumes 7 and 8 of Pristine’s Backhaus Beethoven Edition. Wilhelm Backhaus was one of the very great pianists of the last century. He was a contemporary of Artur Schnabel. There is information (possibly inaccurate) that in the 1930s HMV Records first approached Backhaus for the project of recording all the Beethoven piano sonatas, but eventually settled on Schnabel because an agreement with Backhaus could not be reached. Here we have Pristine Audio’s remastering in the form of two of Backhaus’s Beethoven sonata discs based on recordings made 20 years after the failed attempt by HMV.

Backhaus’s approach to these sonatas is, in many places, unique but idiosyncratic. The idiosyncrasies are not necessarily conducive to good judgment. The two-movement op. 90 sonata is played effectively, admirably in fact. The Sturm und Drang of the first movement is met contrastingly by the sunny disposition of the second movement. The first movement of op. 101 is played inappropriately fast; it’s all over in 3:07. By comparison, Pollini takes 3:44 (very fast but not inappropriately so), Schnabel takes 4:02, Arrau takes 4:46, and Serkin takes 4:47. In the second movement (Vivace alla Marcia in scherzo form), Backhaus ignores the second repeat, but this may have been the result of limited vinyl disc space. In any event, this is an undesirable omission. At bar 20 in the third movement where a large group of grace notes introduces the final movement, the notation non presto appears (in the Schnabel edition and I presume in the autograph). Backhaus plays this as presto, if not prestissimo, obscuring the distinction between the four sets of quintuplet eighth notes and the 10 sets of triplet eighth notes that comprise the grace-note group. At this tempo it is unrealistic, if not physically impossible, to follow Beethoven’s instruction of Nach und nach mehrere Saiten (to pass gradually from una corda to tutti corda). I know of no other performance where Backhaus’s approach is taken. Otherwise, op. 101 comes off well.

The “Hammerklavier” is a mixed bag of great inspiration and questionable judgment. Although Beethoven’s notorious metronome marking for the beginning of the first movement (a very fast minim of 138) is often ignored for a slower tempo, Backhaus carries this to the level of malicious noncompliance resulting in the slowest opening I can recall—noticeably slower than Rudolf Serkin’s didactically (but pleasingly) slow tempo. Throughout the first movement Backhaus introduces many tempo fluctuations, which seems to work for a while. The third movement has Backhaus at his best. Superb phrase shaping by subtle tempo and dynamic adjustments reveals the internal and external architecture of this magnificent movement. The final movement’s giant fugue starting at the Allegro risoluto is again managed masterfully by Backhaus, but the introductory 10 bars are played frenetically, ignoring the many indicated tempo variations in favor of an always-frenetic pulse.

The opening movement of op. 109 repeats the ill of that of op. 101—an inappropriately fast tempo. At an over-before-it-begins 2:40, this is to be compared to Pollini’s fast 3:15, Schnabel’s 3:58, Arrau’s 3:57, and Serkin’s 4:04. On the other hand, in the third-movement variations, Backhaus’s excursion is a revelation of Beethoven’s genius in this musical form. The first movement of op. 110 is again at a fast tempo, but this time it merely blurs the passagework and gives the music no time to breathe, but the final two movements of op. 110 are again a revelation. From the first appearance of the Adagio, through the Klagender Gesang, through the Adagio’s second appearance and the Ermattet Klagend, Backhaus is phenomenal. In the two appearances of the fugue, he again is the master, bringing forth clarity of line and delineation of structure. But there is a downside. The nine G-Major chords that bridge the second Adagio with the second fugue are not played with a continuous crescendo, but rather are allowed to die away at their conclusion.

Backhaus’s first movement of op. 111 is so powerful and so revealing that it is the most rewarding performance that I can recall. His treatment of the second-movement variations is marked (or marred) by some peculiarly fast tempos. The first variation is played rather fast, which has the effect of having the slow and heavenly Arietta theme followed by an awakening, almost jarring, first variation. Several of the succeeding variations are also played at unconventionally fast tempos.

How does one judge these discs in recommendatory terms? For collectors interested in late-period Beethoven, what Backhaus has to say is important, whether in agreement or in disagreement with one’s views or expectations. In many ways, Backhaus and Schnabel each represent very different approaches to this music. Both approaches should be availed for a more enriching understanding of these sonatas.