As with other releases in this series I've taken great care to bring consistency to the tuning of Backhaus's piano where previously it was absent - the average pitches for each of these four sonatas as presented by Decca were A4 = 433.9, 442.5, 432.7 and 438.7 hertz respectively. Furthermore the 12th started low, before drifting gradually upwards, whilst the opposite effect was to be heard in the 13th. Owners of the Japanese Decca (London) CD reissue of the 13th will also be familiar with a 'sticky edit' pitch lurch of more than a tone in the finale, not present here, as well as several completely missing notes in the middle of first movement!

Tonally I've continued to accept slightly higher than usual levels of tape hiss in order to bring out the full tone of Backhaus's piano, something which was considerably muted in the Decca incarnation. Once again it was no surprise to discover that the later recordings were of somewhat better audio quality than the earlier ones. 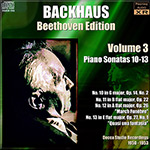 His feeling for classical balance and his sometimes-impish sense of humor enliven these pieces and give full measure to the music.

My earlier enthusiasm for the first four Beethoven sonatas by Wilhelm Backhaus cooled considerably with these releases, especially when I came to the “Pathétique” Sonata. Here Backhaus is being either deliberately perverse or uncaringly inaccurate. The introduction is played both much too fast and without the correct dynamic contrasts in the fp chords, and when he moves into the allegro section of the movement, his playing is entirely glib, on the surface of the music, and with strange, uncalled-for ritards when he plays the minor-key melody in the middle. In short, there is nothing to recommend this performance beyond the range of a curio, and there are certainly enough cold and perverse readings of Beethoven out there the way it is.

His performance of the second movement of this sonata is also rather fast and glib—except for the ending, which he suddenly slows down to a crawl. The last movement is OK in both tempo and phrasing, but has all the excitement of stewed prunes.

Backhaus is considerably better in the smaller-scaled sonatas, Nos. 5–7 and 9–11. Here, his feeling for classical balance and his sometimes-impish sense of humor enliven these pieces and give full measure to the music. (In a few places, for instance the final scherzo of No. 10, his method of rubato—shortening certain bars in tempo while slightly extending others to balance out—reminds me of Annie Fischer’s and Craig Sheppard’s approaches.) Backhaus is also good in the quirky opening of Sonata 11; the second movement, again, sounds as if played on autopilot, but he’s good in the last two movements.

In the “Funeral March” Sonata (No. 12), Backhaus plays the first movement with fine classical balance but rather dispassionately. The second movement has lilt and lift, but in the third (the funeral march) Backhaus’s tempo is right but the mood is too glib. True, he gives the music a certain amount of punch, but here it sounds lively and happy, not the least bit funereal. The last movement, almost predictably, is excellent.

We end with the sonata that comes just before the “Moonlight,” op. 27 No. 1. By this point, Beethoven was moving away from the more classical structure and style of the early sonatas and working his way toward not only a grander but more impassioned form of expression. In this respect, Backhaus’s performance of Sonata No. 13 is good but does not explore the undertow of the music. Even John O’Conor, whose Beethoven cycle is resolutely lyrical in approach, draws more out of this music than Backhaus does here, and I won’t even make the obviously unfair comparison with Schnabel. The bottom line: What was a good Beethoven sonata cycle in its day has not worn its uneven approach well. If you want a lyrical sonata cycle, you can buy O’Conor in digital stereo. If you want a dynamic and individual approach, you can try Sheppard. If you want the most consistent musical approach to all 32 sonatas, however, you must get either Schnabel or Fischer, and Fischer has the edge in both sonics and technical security.