The stereo Soler concerto recordings were transferred from a near-mint US Columbia pressing sent to Philips in Europe as a sample for possible licensing, whilst the Bach came from a near-mint Philips white-label test pressing. Whilst the Soler was clearly well-recorded, and makes excellent use of the stereo process - a rare example where the novel effect of spacing two instruments widely apart actually works - the Bach (who probably didn't actually write the works in question himself) was far more problemmatic.

The recordings were made by Power Biggs himself, using portable equipment brought over from the US in a series of European churches which presented all sorts of voltage and AC current problems for the intrepid organist to solve. Although he made a reasonably good go of converting, for example at one church, 165V at 50 Hz to 110V at 60 Hz, the results were most definitely variable, pitches were less than stable or accurate, and a wide variety of induced electrical hum frequencies were recorded.

Fortunately all of these issues are now resolveable, and the judicious application of Ambient Stereo processing coupled with convolution reverberation gives a sense of real space and presence to these older mono recordings. 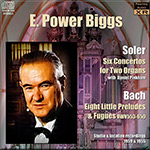 You owe it to yourself to own these performances

This CD brings back some pleasant memories for me—not necessarily of the Soler concertos for two organs, which was music I’d never heard before, but of E. Power Biggs. In my happy but misspent youth, the recordings of both Biggs and Virgil Fox brought me much delight. I was blissfully unaware that Fox had attacked Biggs for his stated belief that 18th-century organ music should be played, whenever possible, on period organs, partly because Biggs made those antique instruments sing and dance with almost as much alacrity as Fox’s own recordings.

That was the delight of Biggs. He looked like your crabby next-door neighbor who was always chasing kids off his lawn, but his playing was always lively, emotional, and moving. This recording was made roughly a year after he persuaded Harvard to install a three-manual, Baroque-styled Flentrop organ in the Busch-Reisinger Museum on the college’s campus. Playing opposite him was Daniel Pinkham (1923–06), for whom organ playing was a complement to activities as a composer and educator. Pinkham studied composition with Walter Piston and Aaron Copland, harpsichord with Putnam Aldrich and Wanda Landowska, and organ with Biggs himself. He was the organist at King’s Chapel in Boston, and a frequent guest on Biggs’s CBS radio program.

Now, I have to admit not knowing how this recording of the Soler concertos was made, but Biggs is playing his Flentrop on the left channel while Pinkham is playing his Hess organ on the right. Since the instruments were firmly ensconced in their respective Boston-area venues, I’m assuming that Biggs recorded his portion and Pinkham filled in the second part. But what puzzles me even more is how Soler expected two organists to play them in the 18th century. I’m not quite sure if they are playable on one organ, four hands, like some piano music. Some musicologists insist that, since the word organos in the work’s title refers to almost any keyboard instrument, they could be played on two harpsichords. This would certainly explain a lot. Musically, these are truly delightful, dance-like pieces, with sometimes surprising turns of phrase. (One of the melodies in the opening movement of the last concerto sounds like Eden Ahbez’s hit song Nature Boy.)

The preludes and fugues written by Johann Tobias Krebs (1690–1762), a pupil of Bach, were thought for nearly two centuries to have been written by Bach himself and thus assigned BWV numbers (553–560). Regardless of the authorship, they are fine pieces of music. Biggs recorded these on his own while making a tour of Europe in 1954–55, using portable recording equipment. For an amateur recording engineer, he did a pretty good job of compensating for the European voltage and current differences, but there were moments of unstable pitch and a variety of electrical hums that Andrew Rose has removed. As usual with Biggs, the performances are lively and buoyant, and I for one am glad to have heard them.

If you are a fan of the Soler concertos, Biggs, or Pinkham, you owe it to yourself to own these performances.