This transfer was made not from the original 78s but from later vinyl transfers made by EMI, which proved generally to offer much quieter sides but, by virtue of predating the digital era, little or no heavy-handed sonic intervention in their production. The results for the most part speak for themselves, with the majority of sides being clean and clear and largely devoid of the surface noise typical of the original HMV shellac discs.

However this restoration would not have been possible - at least not to this degree of success - prior to 2011. For despite EMI's best efforts, their vinyl transfers were dogged throughout with an astonishing degree of wow and flutter, leaving Schnabel's Bechstein sounding distinctly wobbly and inviting a certain sense of sea-sickness to the more pitch-sensitive listener.

New technology, its use pioneered by Pristine Audio in our Beethoven Sonatas series from Schnabel, has finally allowed us to overcome this problem, and deliver Schnabel's Bechstein in a rock-solid temperament never heard before. It has also responded astonishingly well to 32-bit XR remastering here, as can be heard from the opening bars of the theme that begins Beethoven's magnum opus for piano.

Despite a couple of sides displaying more than average surface noise, the overall quality I've been able to achieve is quite astounding, something that I've been able to carry on into the Rondos and Minuet which complete this release. Keeping a light touch on the use of noise reduction has further allowed Schnabel's piano to sing clearly and cleanly, with a fullness of tone and upper frequency extension which has been lacking from previous issues. 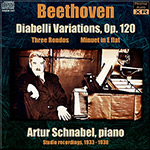 "The Diabelli Variations, like the Kunst der Fuge, have been declared unplayable in the sense that the instruments for which they were written cannot represent the composers' intentions. Thus Bekker writes of Beethoven's work that it " laughingly disregards the insufficiencies of imperfect mechanism and soars on the wings of imagination high above the world of actuality. Both the B flat major sonata and the Diabelli Variations are written for an instrument which never existed and never will exist." This is only a half-truth. Neither words, paint, stone, nor sound can ever fully realise the ideas they symbolise. The medium is not the idea itself, only its vehicle of representation.

These Variations were composed after the last piano sonata, Op. 111 in C minor, a work which certainly shows that Beethoven considered the sensuous aspect of sound a secondary matter, but not one entirely negligible. The same is true of the Diabelli Variations. The wonderful modulation from E flat major to C major at the close of the XXXII Variation, the XX Variation, could not have been written by a man to whom beauty of sound meant nothing...

...There has been no previous recording of this tremendous work and it must be said at once that all concerned have made a real success of it. The piano is exceptionally well recorded in the higher treble and bass, but is 'twangy' sometimes in the middle of its compass. This we have had before in Schnahel's recordings. On the whole, also there is not much of the "characteristic Schnabelian scamper" in this long and arduous task.

One has only to hear the first, twentieth, and last Variations to estimate how finely Schnabel has risen to the greatness of the work. Variation XX is one of the most profound pages in Beethoven and its haunting atmosphere is completely captured in playing and recording. There is true double piano here. Schnabel is least likeable where Beethoven, as it were, makes him so; but those pages must be tackled with energy, with hard and uncompromising tone. The portrait Beethoven has drawn could not be toned down without becoming ridiculous.

I am sure this issue will take a very high place in Schnabel's long list of Beethoven recordings and it should arouse much interest in a rarely played work."