"The sound quality ... made me rethink my conception of Schnabel"
- Classical CD Review

Schnabel's recording of the Hammerklavier is without doubt hugely important. It's one of the sonatas he left to the very end of his groundbreaking traversal of the Beethoven sonata cycle - his November 1935 sessions completed the series - and his recording has divided critics ever since. For some it's a mess of too many missed notes and splurges - he takes it too fast and its beyond his ability. For others, however, Schnabel captures an essence of the piece which few can ever hope to match - the occasional slip is secondary to the overall impression and conveyance of meaning and artistry inherent in the work.

It is to the latter which I hope this new 32-bit XR restoration will appeal, as although we cannot (and would not) correct mistakes and missed notes, we can now appreciate a far clearer and fuller auditory picture of the grand scope of Schnabel's delivery. Steve Schwartz, writing in Classical CD Review on earlier volumes in our series, described well the merits of this approach: "it made me rethink my conception of Schnabel. He had always seemed to me a straight-ahead, rough-and-ready player, with a dominating rhythmic excitement. Without losing any of Schnabel's virtues I knew about, Pristine's incarnation showed me the subtlety of his line, the seamless naturalness of his crescendos and diminuendos, and his singing qualities. The last had totally escaped me." 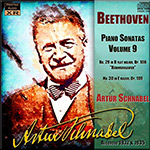 His poise and timing here leave nothing to be desired at all .... this, surely, is how the movement should be

"Schnabel is said to have disliked recording because a gramophone record stood as something permanent and finished which for him was not so. "I am living from the hope of doing my work better tomorrow than I have done it today, and if I did not I could not live as an artist," he once remarked. As listeners, however, we may be quite content to have a line drawn where HMV drew one 30 years ago. We may notice unevennesses in the series, but there is scarcely a movement in all the 32 that we can count a disappointment, even on Schnabel's own terms. His remains the first complete set of these works that was ever made and the most distinguished. Particularly remarkable is the fact that his Beethoven still speaks to us with such compelling immediacy. The climate of musical performance changes with the years just as other things do, and whether you consider the ebb and flow of musical fashions some thing to be accepted or regretted, the fact is that to enjoy a performance of 30 years ago an effort of adjustment, sometimes a considerable one, has to be made. But Schnabel confounds this. He might have made these records yesterday; they haven't dated a bit. His Beethoven may well prove to be timeless. I shall be very surprised at least if I do not find myself listening to him with the same pleasure 30 years from now.

I mentioned unevennesses; there are some, I think, on the discs here—a few things which fall short of perfection and one or two others which would even more clearly admit of improvement. But if the last word on the Hammerklavier had been spoken what a dull world for pianists we would be living in! In April I said that my first impression of Schnabel's performance of this sonata was of something almost untamed, a performance which conveyed more of the music's grandeur and brilliance and perhaps less of its notes than any other I had heard. It is true that in the fugue he covers the physical ground by the sheer skin of his teeth at times, but in the first movement his playing is really splendidly controlled considering the speed at which he attempts it (a tempo close to Beethoven's own metronome marking, incidentally—which is usually judged unrealistic, not to say unwise). A couple of hearings are probably necessary before one can take in the events of this movement at this pace; only then does the full majesty of the performance manifest itself. Now that I am accustomed to this tempo I do not want a slower one; somehow the speed projects the music closer to Beethoven's own overwhelming vision, and I feel that anything more moderate would lead to a corresponding loss of something precious. The slow movement on the other hand is at another extreme—very slow, as it must be, and perfectly distilled. To play a Beethoven slow movement really slowly, as so many of them demand, is perhaps the most difficult thing of all. Few pianists have the gift...

I have no reservations whatever about Opp. 109, 110 and 111. His poise and timing here leave nothing to be desired at all. The poise is even more classical than usual, I think; there is no lack of warmth and direct expressiveness, especially in the A flat Sonata, Op. 110, but in the variations of Opp. 109 and 111 he is at pains to let the patterns and structure of the movements speak as much as possible for themselves. I am sure this is right, particularly in the variations of the C minor, Op. 111. The "static and ecstatic visions" of this movement are seriously disturbed if the phrasing in the arietta and the first four variations is too fussy and conventionally soulful: the whole point here is that nothing really dramatic is going on. The real event of the movement happens in the coda, at bar 106, where the trills begin. The dramatic coup is the extraordinarily telling harmonic colour of E flat major first mooted in bar 110. Schnabel makes the world of this, and afterwards, in the restatement of the arietta and the final long dominant trill, and not until then, he lets the music soar up on to the highest plane to conclude the sonata in a glorious C major cloud. Not until this concluding section can we fully appreciate what has gone before; and this, surely, is how the movement should be."