"The sound quality ... made me rethink my conception of Schnabel"
- Classical CD Review

In terms of overall sound quality and the difficulties of restoration, this volume has generally presented fewer problems than most, something the listener should immediately find apparent in the clarity of sound achieved in many of the movements presented here. The usual problems inherent in trying to extact as much musical information as possible do still arise, but overall to a lesser extent, and the piano tone is often more vibrant and extended than in some previous volumes. Naturally the playing is exquisite! 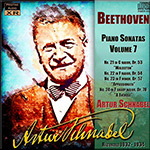 Time and time again I have been struck by this as I listened to Schnabel's playing: it's as though the force of his convictions dictates an altogether exceptional brilliance in his playing

"Now that the reissue of all the Beethoven sonatas is well under way I suspect that the gibes people used to make at Schnabel's technique will become a good deal less common. A case could certainly be made for regarding Schnabel's Beethoven records as documents of supreme virtuosity, if the term virtuosity be understood to embrace a blazing intensity of interpretative vision as well as a breathtaking manner of execution. Time and time again I have been struck by this as I listened to Schnabel's playing : it's as though the force of his convictions dictates an altogether exceptional brilliance in his playing.

The 'fluffs' and the rhythmic telescopings that occasionally make us raise our eyebrows are actually almost always the results of attempts at the impossible, attempts to push an idea to the very limits of its logic and even a bit beyond, rather than results of an imperfect control of mind or fingers. You can find several examples of this on these records. The finale of the E flat Sonata, Op. 31, No. 3, provides one. Beethoven marked it presto con fuoco, and obviously didn't intend it to go at a gentle amble; but with Schnabel it goes like a tornado, and although in itself the idea of this is perfectly convincing in the final reckoning clarity of texture and articulation do get sacrificed on the altar of excitement, and this is rather a pity. Yet I don't complain—the performance of the rest of the sonata seems to me quite perfect.

To a lesser extent parts of the Waldstein and the Appassionata show the same madness (if I dare call it that). Schnabel takes the finale of the Appassionata at something a good deal faster than an allegro ma non troppo and gives the ubiquitous semiquavers a light and almost fantastic touch; but although this again seems quite justifiable, and although the transition from the allegro into the presto is very well managed, there are, almost inevitably, places where the details don't have time to make effect. Not so in the first movement, however. This is unfolded with a tremendous sense of majesty and awe: nothing is over-driven and nothing too heavily underlined—the rhythmic detail is scrupulously correct and grandeur and spaciousness are everything; here indeed the music seems to be playing itself.

I was interested to find Schnabel observing Beethoven's pedalling indications in the finale of the Waldstein. These are something of a problem. Should they—on the one hand—be regarded as a mere adjunct to the huge harmonic spans of the melody at the beginning of this movement, an attempt to make the early nineteenth-century piano convey the unprecedented breadth of this music with the grandest possible sonority ?—in which case perhaps one should not observe them too literally when playing on the modern piano—or are they signals for cloudy, Aeolian harp effects? The evidence certainly points to the Aeolian harps, at least by deduction from Beethoven's own practice of indicating the pedalling he wanted in his piano works. Schnabel evidently agrees; or rather, once one has heard how he solves the problem, one is inclined to agree with him.

To turn from listening to the Waldstein and the Appassionata and Op. 31, No. 3 in E flat to the three smaller sonatas on these records makes a good contrast. COLH59 has the little F major Sonata, Op. 54, sandwiched between Opp. 53 and 57, COLH58 the two Op. 49s. The modest Op. 49s, written much earlier than their opus number implies, are of course really no more than sonatinas in scope. But Schnabel treats them just as affectionately as the more celebrated sonatas, and without ever attempting to inflate their expressive content invests them with much more than charm. In particular the first movement of the G minor Sonata, Op. 49, No. 1, has, as he plays it, a directness and a childlike simplicity of utterance that seem to look forward to the world of the Op. 119 Bagatelles.

A word of praise finally for the quality of the LP transfers. The earliest recording here is of the E flat Sonata Op. 31, No. 3 (March 1932) and this has a less clear sound than the others (and also a rather prematurely cut off last note at the end of the Minuet); but the quality of the rest is really extraordinarily good. Perhaps I might add that, in general, I would have liked longer scrolls between the movements—a small but by no means an unimportant point. Otherwise all gratitude to HMV for making available another splendid pair of discs. The interpretations are not likely to be surpassed: they seem to me to offer at once lasting satisfaction and a communication of Beethoven that is as compelling and immediate as it must have been thirty years ago: something that is indeed still vital for us today and in no sense of mere 'historical' interest."