"It's good to have these classic and interpretatively superb
recordings of one of Bach's most compelling organ works available.
The transfer quality is almost as satisfying as the performance. "
- Mark Sealey - MusicWeb International CD of the Month, Sept. 2010

Helmut Walcha's Bach recordings are rightly hailed as some of the greatest of the twentieth century. He recorded more or less the complete organ music twice for DG – the first time around (1947-52) in mono, and then again a few short years later (1956-71), remaking the series in stereo. As a result the mono recordings soon slipped into a kind of semi-obscurity, with later reissues concentrating on the stereo equivalents.

There is some kind of sense in this for the listener – by comparison to the potentially room-filling and awe-inspiring sound of a church organ and its attendant acoustics which envelop you when listening to stereo recordings, it seems to me that more than usual is somehow lost in a mono organ recording; the instrument seems considerably diminished, the impact distant, one-dimensional and uninspiring.

This was the sound I heard coming from my speakers when I started transferring the first of five LP sides which together made up the source material for this release (the sixth side featured older recordings of a different organ), and I was deeply ambivalent with regard to the possibilities offered by the recordings. It was more through a sense curiosity than any real hope that I began experimenting with the restoration and remastering of such unlikely work – and a feeling that Pristine really had managed to neglect the organ repoertoire over the last five or so years.

The first sign that all was considerably better than I at first thought came with XR re-equalisation – by now the minor irritants of vinyl surface noise had already been dealt with and I saw immediately from the frequency response curve that much musical information had probably been somewhat buried by poor recording equipment. In particular the magnificent lower registers of the organ were often muted to the extent that they were barely audible; restoring these to their more normal levels had literally ground-shaking consequences! Further up the frequency range and there again was more to be heard than the records ever suggested – with XR re-equalisation what was beginning to emerge suggested something of the full grandeur of the instrument itself.

I still had a problem, however. One of the great aspects of listening to a church or cathedral organ is the effect the building's acoustics have on the sound experience, as one is enveloped in sound which appears to arrive from all directions and none at the same time. This seemed more than Pristine's Ambient Stereo processing normally delivers, so I turned instead to the option of using advanced convolution reverberation. This takes the acoustic 'sound' of a real location and maps it digitally, allowing the reverberation from that space to be used in an exceptionally realistic manner for other recordings.

Although I did not have an acoustic mapping of the church used for this recording, what I did have in my collection was a remarkably similar church. The village church of Cappel, in which stands the beautiful Schnitger Organ heard here, is rather small and unassuming – its shorter reverberant decay time blurs the music less and allows one to hear much more fine finger-work than might be apparent in a larger church or cathedral. By mixing in a small amount of convolution reverb derived from a very similarly sized and constructed church I was able to take this recording a final step closer to reality and realise the full sense of presence and place captured in the grooves of those 60 year-old LPs.

In fact, so convinced am I that this recording really needs this additional 'help' that I've taken the unprecedented step of offering it only as an Ambient Stereo recording – in all formats. Without it the recordings seemed (to me) somewhat ineffectual and dusty relics, superseded by their later re-recordings. With it they're truly alive and astonishingly vivid and contemporary – given full rein and a good bass response from your loudspeakers the grander works are truly awe-inspiring to hear, while the more contemplative pieces completely hold the attention. In short, I'm delighted and just a little overwhelmed by what has been possible here – as I hope you will be too.

Transfers from Archiv LPs APM 14021, 14022 and 14030
XR remastering by Andrew Rose at Pristine Audio, May 2010
Cover artwork based on a photograph of Helmut Walcha 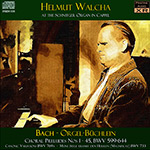 Helmut Walcha's (1907-1991) recordings of the Bach organ repertoire are amongst the most celebrated of the twentieth century for their magnificence, eloquence and perception. Walcha recorded more or less the entire repertoire twice, for DG … in mono from 1947 to 1952 and again in stereo between 1956 and 1971. It is the former, the mono series on the splendid Schnitger Organ in the church of Saints Peter and Paul in Cappel (the CD and Pristine Audio's website are inconsistent with the town's spelling) in Lower Saxony, which has been expertly transferred to two CDs by Andrew Rose of Pristine Audio.

In fact, the lively, resonant and full sound is likely to be the first thing you notice. It's quite remarkable. True, there are moments of slight wow and flutter. But they really are very, very slight. There are no other 'artefacts', distortion or interference with our enjoyment of the music.

The Orgel-Büchlein, or Little Organ Book, was a product of Bach's years at the court in Weimar (1708-1714). Originally there were to have been 164 chorale preludes suited to all times of the liturgical year. Although there are traces of the 47th, only 46 were ever completed. The Orgel-Büchlein should be considered a collection in its own right of music for the instrument (chorale preludes are small-scale works based on chorale melodies), music for church services with implied religious affirmation, an exploration of compositional techniques, and even a teaching aid. CD 1 contains the first 28 chorale preludes of the Orgel-Büchlein, that is BWV 599 to 626; CD 2 the last 18, BWV627 to 644. The three versions of Christ ist erstanden, BWV 627 are recorded.

Walcha's understanding of Bach's purpose is evident in every note and bar. He plays with a dignity and detachment that eschew romantic overlay or intonation. That's not to say that the performances lack colour. They do not. His tempi and phrasing, for example, are full of meaning. Such a number as Christ lag in Todesbanden, BWV 625 [CD.1 tr.27], for example, is typical of the immense emotion (in this case a weighty and inescapable pain) which Walcha packs into less than a minute and a half … several of the chorale preludes in the Orgel-Büchlein last under a minute, many under two and few are longer than three.

It's thus necessary for a sensitive interpreter to understand the overall direction, and the traditions of Baroque provincial organ composition for that matter, in which Bach was working. The chorale preludes in the Orgel-Büchlein will not sound well if treated as an unrelated series of one-offs. Continuity, which is not the same as uniformity, is important. It's Walcha's immense experience of Bach and the organ as well as great insight into the religious purpose behind the Orgel-Büchlein that make these such valuable interpretations. And the fact that this understanding leads to a degree of variety whereby the particular import and impact of each prelude is fully communicated such that each is a delight on its own - despite forming part of a whole.

In a way this comes - paradoxically - from a refusal by Walcha to 'editorialise', to impose his own conception on Bach's music. When Bach was subdued (as in Das alte Jahr vergangen ist, BWV 614 [CD.1 tr.16], for example), Walcha is subdued; when exuberant (as in In Dir ist Freude, BWV 615, the very next prelude), Walcha is exuberant. This is classic and ultimately very satisfying playing.

No standalone CDs of Walcha's recordings of the Orgel-Büchlein alone seem to be available. Even if they were, these two Pristine Audio CDs retail for a price less than what they would cost. Even then, it's the stately and perceptive interpretation that truly recommends these recordings. When you consider the excellent sound quality, they're hard to resist.