A rare and often highly individual take on Chopin

Le Club Disque du France was launched in the summer of 1953, and lasted for some fifteen years. It appears to have used a simple sequential numbering system for its LP issues, with this disc being number 71. At the time of writing we have scant further dating information and nothing regarding the recording venue - there are no sleevenotes on the LP cover, the pianist's name is mis-spelt, and the only additional information other than the track listing is the indication that a Pleyel piano was used. The low release number and the size of the disc (ten inches rather than twelve in diameter) leads us to speculate that this was probably one of the earlier issues of this label, most probably between 1953 and 1955.

The recording itself was reasonably well made for its day, though technically not in the top rank, and the disc surface had been reasonably well-preserved. The main difficulties in restoration lay with defects typical of the early days of LP pressings and familiar to anyone who is well acquainted with the LP's shellac predecessor - a certain tendency to high frequency swishing and a slight coarseness of surface noise. That said, it did not suffer from the bane of many piano recordings of the era - high frequency blasting or distortion.

If you're a piano-phile, or lover of Chopin, this is at times one of those idiosyncratic performances which you'll either love or hate. Paul von Schilhawsky (b. 1918 Salzburg, d.1995 Paris), who did not make many recordings, was quite highly regarded in his day as both a pianist and conductor, and also as a teacher. He was Director of the Salzburg State Theater, and later Head of the Directorate of the Mozarteum and the International Summer Mozarteum Academy in Salzburg. 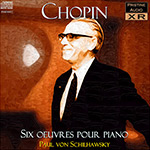