"a very good recording that reproduces faithfully the subtlety of his tonal shadings. Highly commended" - The Gramophone

In considering recordings such as this, I often find it instructive to return to the reviews of the time. I am lucky to have been provided with no less than three cuttings of contemporary British reviews of this LP following its release in 1956, from which I wish to quote liberally:

"Written over a long period of time, Granados's Spanish Dancews range through the full field of Spanish regional music. Villa-Lobos, in his Nonet, aimed to provide "A Rapid Impression of All Brazil", Granados does something of the same sort for Spain. The Dances make fascinating listening, animated and various, some better than others, though none of them dull. The earlier Westminster set was rather two-dimensional. Gonzalo Soriano, known to LP for his Nights in the Gardens of Spain, plays with a much greater sense of rhythmic finesse, daring freedoms not essayed by José Echaniz in his more straightforward reading, and investing the music with irresistible liveliness and colour. Fortunately, he gets a very good recording that reproduces faithfully the subtlety of his tonal shadings. Highly commended."
(A.P., Gramophone November 1956)

"Easily the best performance of the Spanish dances yet issued; also the best recording. Soriano combines poetic feeling with a supreme command of the Spanish musical idioms. Note the delicate and fanciful treatments of the trills in No. 2, the well-known malaguena - far and away ahead of all rivals; and this sets the tone for the whole collection. The recording also wins comfortably over its predecessors: it has both warmth and clarity and resides behind absolutely silent surfaces... The present record might well be the finest issue of Spanish piano music to come from any source." (Burnett James, source TBC)

"Performance: Brilliant - Recording: Very good.
General Review: This performance has a bigger range and more pianistic interest than previous LP issues of the Spanish Dances. Soriano points the contrasts in Nos. 5, 6 and 9 more effectively than his predecessors and these numbers are accordingly more exciting than usual. His Nos. 1 and 7 are thoughtful and delicate, but he also reveles in the richness of No. 8. No. 10 is taken unusually fast but is none the less convincing for that. He shows throughout at judicious blend of Spanish colouring with traditional pianism which one feels must be very close to Granados' intentions." (Andrew Pavolvsky, Record News[?]) 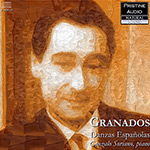