Mozart's only Sonata for Two Pianos, written in 1781, is a fascinating work - not just musically, but also in ways that the composer could never have imagined. Musically it is widely regarded as one of the composer's finest compositions, described by Alfred Einstein thus:

The art with which the two parts are made completely equal, the play of the dialogue, the delicacy and refinement of the figuration, the feeling for sonority in the combination and exploitation of the registers of the two instruments—all these things exhibit such mastery that this apparently superficial and entertaining work is at the same time one of the most profound and most mature of all Mozart’s compositions.

Certainly it does seem to distill into one relatively short piece almost all that is perfect Mozart, and it was perhaps with this in mind that the piece took on a new life in 1993 with the publication in the scientific journal Nature of an article by Rauscher, Shaw and Ky entitled "Music and spatial task performance".

If one takes their research and distils it down to the level of your average tabloid newspaper headline writer, they claimed that listening to Mozart boosts your IQ. Of course the reality was not quite that - a set of tasks, which included pattern analysis and paper folding and cutting, were found to be performed better than after listening to silence or a relaxation tape - to the extent that spatial IQ increased by an average of 8-9 points for a few minutes after listening to the music.

Thus was an entire industry born, capitalising on the so-called 'Mozart Effect', and that's why we're giving away the crucial first movement - so that you can listen to it whenever you need an instant boost to your branepower.

Wiener and Doucet were perhaps best known in their day as jazz pianists - but having come out of the Paris Conservertoire and with close associations with the radical French composers known collectively as Les Six, they spent a number of years at the heart of modern musical life in 20's and 30's Paris. What is particularly wonderful about this recording is a spirit of freedom and joy they instill into the music - if there is perhaps a certain technical looseness to their delivery it is more than made up for by panache! 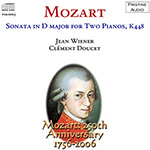