Fine transfer of his 1953 recordings

Schumann wrote three sonatas for the piano, all during the mid-1830's when he was at the height of his powers, and of these it is the second which stands out as his masterpiece of the genre. Written for and inspired by the love of his life, the young Clara Wieck, Schumann spent four years revising and reworking the piece until he was ready to publish it. During this time this music developed and deepened in parallel to his affections for Clara, and as such is now seen as one of music's great labourd of love.

The six Intermezzi were written slightly earlier in 1832, being published in 1833. Though just 22 years of age at the time of composition, these are no slight works - they display an expressive richness and an emotional intensity which not only herald the greatness to come but stand in their own right as works of true merit.

Grant Johannesen (1921-2005), born in Salt Lake City, USA, was one of the great American pianists of the 20th century. He studied under Robert Casadesus, Roger Sessions, and Nadia Boulanger. He made his Manhattan recital debut when he was 23, won the Concours International when he was 28, and was considered the first important American pianist to emerge after World War II.

He was particularly associated with French piano music, being the first to record the entire piano compositions of Fauré. He undertook many tours, both solo and perhaps most notably with the New York Philharmonic. A rapturous reception in Moscow once earned him 16 encores. 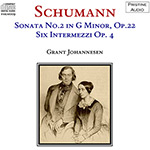