Three Jean Sablon albums in one!

Jean Sablon has long been a favourite of mine, going back to a set of 78rpm discs which came with my first wind-up gramophone, a 1929 HMV free-standing model that had a selection of discs in its storage compartment when I bought it. The songs which stuck in my head were Vous Qui Passez Sans Me Voir, winner of the 1937 Paris Gold Medal for disc of the year, and its flip side, La Chanson Des Rues, both of which feature here.

I later tracked down a large number of Sablon discs, including the rare 1952 LP "Songs of a Boulevardier", an American release which seems to have been ignored by the many compilations of Sablon's material since (a possible sighting of the final track, Ave Maria No Morro, on a nicely presented but poor-sounding Universal double-CD, The French Troubadour, is both mis-labelled and mis-credited). The songs on this LP form the first part of this issue.

We then head back to the 1930's and Sablon's pre-war heyday. Rather than pull together the usual mish-mash of hits I wanted to concentrate on two very important parts of Sablon's work. First we have the small ensemble material with Django Reinhardt, who Sablon had helped to get his first Paris booking, and the earliest recordings of which pre-date the formation of Reinhardt's famous and influential Quintette du Hot Club de France. In the tracks selected here we hear Reinhardt both as soloist and accompanist as the arrangements demand, his distinctive style always clearly evident.

The other key player in the Sablon success story was Wal-Berg, an immigrant of Russian-Jewish descent, born in Constantinople, and one of the foremost arranger-conductors of the era. A musician as equally at home with Jazz and Swing music as he was with the Classical canon, his employment with Sablon's record company in the mid-late 1930's ensured absolutely top-rate arrangements, as heard to great effect on our sample recording Paris Tu N'as Pas Changé, which brilliantly evokes in music and scoring the train journey into the city for the 40 seconds of the song's introduction.

For the first time, these 1930's selections can be heard in sound quality that does them real justice - so many of the re-issues currently available of Sablon's material from this era are characterised by a thick, heavy and dull sound which entirely misrepresents the actual recordings. Thanks to the use of XR remastering we can finally hear the songs as they should have sounded!

17-24: Orchestra arranged and conducted by Wal-Berg

*Despite Grapelli being credited on these tracks there is no audible violin playing - and nobody is credited with the piano parts which are key to the arrangements! 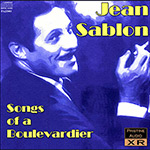