The Glyndebourne Opera Festival from fairly early on intended to spread its impact by touring, not just in Britain, as it did in 1940 through performances of The Beggars's Opera, but worldwide, in Belgium and France as well as in New York (in 1939, the year of the World Exhibition there). Nothing came out of the latter, but in February 1940 the Glyndebourne Così fan tutte was kind of revived at the Stockholm Royal Opera. Not the original production, as the stage sets could not be relocated due to the war situation, and Carl Ebert had migrated to Turkey where he was founder-director, from 1936, of the the opera and drama school of the Ankara Conservatoire. But Ebert's assistant at Glyndebourne, Hans Busch (Fritz's son) was available and willing to revive the production, with sets, costumes and a staging very similar to those of Glyndebourne (a similar 'repeat' of the Glyndebourne Così production was to take place in 1941 in New York through performances by the New Opera Company).

This production of Così remained in the repertoire until 1951, the soloists' cast largely unaltered. Hjördis Schymberg (1909-2008) was a leading Swedish operatic and concert singer but had only a fairly short international career, appearing several times in England but at the New York Metropolitan Opera only in 1947 as Countess Almaviva (under Busch) and Gilda in a total of four performances. Helga Görlin (1900-1993) had made her operatic debut in Stockholm as Debussy's Mélisande, and retained several lyrical rather than dramatic soprano roles there. Isa Quensel (1905-1981) had created the title role of Korngold's Die Kathrin in 1939 in Stockholm, conducted by Busch, and Busch liked her performing abilities (she became a prolific film actress) so much that he persuaded the Glyndebourne management to engage her as Despina for the 1951 season. Lyric tenor Einar Andersson (1909-1989) was a member of the Stockholm Opera from 1939 to 1963, while baritone Hugo Hasslo (1911-1994) actually made his operatic debut in the 1940 Così and quickly established himself as the first baritone of the Royal Opera; BIS released a 1959 performance of Rigoletto with Hasslo starring in the title role and featuring a splendid cast including Nicolai Gedda as the Duke. Sigurd Björling (1907–1983) was particularly noted for his Wagnerian roles, being the first post-war Wotan at Bayreuth in 1952; later performances of his from Stockholm, starring in Fidelio and Aida, have been released only incomplete, Birgit Nilsson being his celebrated partner on stage.

This 1940 performance (only the overture and two arias of which have been released previously), is an important historical document not least because it was made just a short time before Busch had to flee from the invading German troops via Siberia and Japan to the USA. He returned to Sweden in 1946 and made his last appearance there as a conductor on 11 May 1951.


Although this recording was originally preserved on a set of acetate discs, it came to me via tape transfers held at the BuschBrothersArchive in the Max-Reger-Institut, Karlsruhe, Germany. For reasons unclear, the sound quality of the second of the four tapes which hold the opera was reduced by comparison to the other three. While I've tried to compensate for this quality loss, there is only so much that is recoverable. Nevertheless all four tapes have been considerably sonically improved in the present restoration process, and the end result is an engrossing and highly enjoyable listen as a result.

As was common at the time of the performance, a number of cuts were made to the opera. We are thus presenting the work in its entirety as performed in Stockholm on 30 March 1940. I am grateful once again to Dr. Schaarwächter for his huge help and assistance in putting together this historic release. 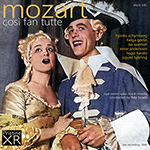