"Many readers will have listened to La Sonnambula broadcast from Edinburgh, with the same Amina, Elvino and Rodolfo. The first thing to be said is that La Divina is in far better voice on this recording than she was in Scotland. There she was tired (between recordingLa Sonnambula and singing it on the stage she recorded Manon Lescaut, and then Turandot, which may perhaps have had something to do with it). The première had uneasy moments, and by the third performance, which was broadcast, almost every sustained note around about G started to crack and collapse. This does not happen in the set; there we hear the Amina which for two seasons has delighted audiences at La Scala, and very wonderful it is. The voice is not perfect. There are once or twice hints of that second note underlying and sullying the proper one. There are sharp, wobbly notes (the final one of “Come per me sereno”, for example). But there is also much exquisitely beautiful singing—lovely tone, movingly tender phrasing, gloriously delicate and virtuosic moments such as at some upward arpeggios in “Sovra il sen ”.

I have used the words “spellbinding and sublime art” about Callas’s interpretation of the role. It is very intricate, and fired by poetic intellect. I should like to quote Felice Romani, the librettist of the opera, on the subject of his heroine, for all that he says is relevant to Callas’s performance: “The role of Amina” he wrote, “although it may seem at first sight easy to play, is perhaps more difficult than many others deemed more important. It calls for an actress who is playful, ingenuous and innocent, and at the same time passionate, impetuous and affectionate; who has one cry for joy and another for sorrow, different timbres for reproof and for pleading; who displays in every movement, in every glance, every sigh, a certain stylisation mixed with realism such as we find in some paintings by Albani and certain of Theocritus' idylls”.

Thus, said Romani, did Giuditta Pasta create the role . . . and thus does Maria Callas perform it. I need hardly point out how strikingly she colours every phrase, note and word. After a couple of playings, almost every line of recitative sticks in the mind with the exact colour and expression that she gives to it; “Compagne, teneri amici”, before “Come per me”; “Il cor soitano”, the only dowry she brings Elvino ; “Qui! perchi? ”, filled with terror and amazement as she wakes in the Count’s bedroom; “Alt ! il mio anello”, the cry which wrings our hearts as much as Brünnhilde’s shriek, and far more affectingly, when the ring is torn from her finger. Sooner or later I shall have to brave the comparison with Pagliughi, so let me plunge in here to remark that Pagliughi sings “Qul! perchi?” with far less character, yet is touchingly beautiful all the same; but that her “Ah! il mio anelio ” goes for fairly little; that she is much less passionate and moving in her pleading with Elvino in the forest scene.

Pagliughi is far more the “playful, ingenuous and innocent” heroine only. I love her performance. The beautiful thread of tone, the notes dropped sweetly and truly into place, afford a kind of pleasure that Callas cannot provide. Her phrasing of “Come per me”, though less intricate than Callas's, is also extremely beautiful. I can’t quite define why Callas’s “Ah, non credea” should strike me as less than satisfying; perhaps the timbre is too strongly coloured for the line of the music. “Ah, non giunge” is relatively unaffecting because simple gaiety is not something that this soprano can easily express. Welling, interior, almost unbearable joy, yes, but not bright, clear happiness. Pagliughi is deliciously bouncy in this final aria; Callas turns it into a rather self-conscious and excessively elaborate display. The second verse can take a lot of decoration (Pagliughi sings only Bellini’s notes—yet how attractively), but the embellishments must sound fresh, not, as here, laboured.

Romani also said that the singing of the role should be “at once simple and adorned, spontaneous and perfectly judged, finished but without showing the signs of study”. Between them, but not separately, Callas and Pagliughi embody his perfect heroine. It is Pagliughi who has the cry for joy—every time she sings the word “gioia”, which comes often, she gives it a little joyous inflexion, particularly in the final “Oh gioia” of her awakening, marked by Bellini con un pianto di contento—but Callas who has the cry for sorrow: listen to her tone as she starts the quartet “D’un pensiero” at the end of Act 1.

The concerted numbers go well in the new set, especially the two soprano/tenor duets of Act 1, with limpid sixths in the second verse of “Prendi, Panel” and fascinating phrasing of the lovely “Son geloso del zeffiro”. Monti’s voice has been stepped up a little by the engineers to sound more robust than it does in life. He is a smooth, reliable, well-tuned and tasteful singer, though a much less interesting artist than Tagliavini, whose interpretation seems more personal, and more deeply felt. Zaccaria too is reliable, though here not in the Siepi class: the divine melody of “Vi ravviso” counts for much more in the Cetra set, and Siepi shows far more imagination in his utterance of the beautiful verses which lead into it. Ratti’s Lisa is delightful, and Cossotto brings a lovely firm voice to the part of Teresa, though she tends to sing too loudly. Norberto Mola’s Scala choir is outstanding in the chorus describing the fantasma, and also in the one where the villagers creep into the Count’s bedroom, only to be surprised by finding a girl asleep on the bed..."

This recording is unusual in that it was only the second time that Maria Callas recorded an opera with the La Scala company for EMI that was made in the Basilica di Sant'Eufemia, a late 19th century church in Milan. Ironically the previous time this location was used - normally recordings were made during the summer 'off-season' in the Teatro Alla Scala - was for a previous Bellini recording, Norma, from 1953, both recorded in mid-March at a time when, I assume, the opera house was unavailable.

As a result of this unusual acoustic, especially for opera (normally churches and opera houses are at the opposite ends of the spectrum when considering natural reverberation within the space), this remaster proved more than usually tricky. It is unfortunate also, at a time where stereo discs were only a year or so away and, in the US at least, stereo tapes were already outselling their cheaper mono versions, that EMI stuck with mono recording - despite the success of their previous outing in London with Rossini's Il barbiere di Siviglia (PACO191).

This Ambient Stereo remaster therefore aims to manage two things at once - both to enhance and "fix" the sound of the original recording, and to place it in the more acoustically appropriate space of one of the world's great opera houses. I hope you will find success on both fronts.

XR remastered by Andrew Rose
Cover Artwork based on a photograph of Maria Callas as Amina at La Scala, Milan, 1955
Recorded at Basilica di Sant'Eufemia, Milan, 3-9 March, 1957
Produced by Walter Legge. Engineered by Robert Beckett.
First released in the UK as Columbia 33CXS1469/70-1 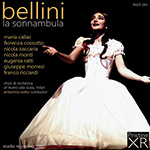