The short title, Così fan tutte, literally means "So do they all", using the feminine plural (tutte) to indicate women. It is usually translated into English as "Women are like that". The words are sung by the three men in act 2, scene 3, just before the finale; this melodic phrase is also quoted in the overture to the opera. Da Ponte had used the line "Così fan tutte le belle" earlier in Le nozze di Figaro (in act 1, scene 7).

The first performance of Mozart's setting took place at the Burgtheater in Vienna on 26 January 1790. It was given only five times before the run was stopped by the death of the Emperor Joseph II and the resulting period of court mourning. It was performed twice in June 1790 with the composer conducting the second performance, and again in July (twice) and August (once). After that it was not performed in Vienna during Mozart's lifetime. The first British performance was in May 1811 at the King's Theatre, London. Così fan tutte was not performed in the United States until 1922, when it was given at the Metropolitan Opera.

According to William Mann, Mozart disliked prima donna Adriana Ferrarese del Bene, da Ponte's arrogant mistress for whom the role of Fiordiligi had been created. Knowing her idiosyncratic tendency to drop her chin on low notes and throw back her head on high ones, Mozart filled her showpiece aria "Come scoglio" with constant leaps from low to high and high to low in order to make Ferrarese's head "bob like a chicken" onstage.

The subject matter did not offend Viennese sensibilities of the time, but in the 19th and early 20th centuries was considered risqué, vulgar, and even immoral. The opera was rarely performed, and when it did appear it was presented in one of several bowdlerised versions. After World War II it regained a place in the standard operatic repertoire and is now frequently performed." - Wikipedia

"This is a performance worthy to be set beside the Glyndebourne one recorded for the Mozart Opera Society (EMI) and it has, of course, the advantage of present-day recording technique. The Glyndebourne set omitted two arias from Act 2, ‘Tradito, schernito’ (sung by Ferrando) and ‘E amore un ladroncello’ (sung by Dorabella), which are restored in the present recording, though the Duettino in Act 1, and Ferrando’s aria ‘Ah! io veggio, quell’ anima bella’ are, as is customary, cut. The recitatives are reduced to the necessary minimum, but they are sung with such verve and expression that I almost regretted the cuts. One of the most delicious moments is the conversation about the weather between the embarrassed couples in the garden scene in Act 2.

The casting is ideal. Elisabeth Schwarzkopf is in splendid voice as the sentimental Fiordiligi and sings her two big arias not only brilliantly but with expressive moments that are really touching: and Nan Merriman, as the practical Dorabella, is equally good and keeps a firm hold of the vocal line in her Gluck-like aria, ‘Smanie implacabili’. The two voices blend well and the characters, vocally, are excellently contrasted.

Lisa Otto has not quite the flexibility that Alda Noni brought to the part or the mischievous charm I remember (in an unforgettable performance at the Residenz Theatre, Munich, in past years) in Elisabeth Schumann’s singing: but Miss Otto is a good Despina and very amusing in her assumed voices as the doctor and notary.

Sesto Bruscantini’s Don Alfonso is a subtle and convincing characterisation. He uses an apparently gentle old man’s voice (‘I’m a peaceful old fogey’) as he makes fools of the sisters (and indeed of their lovers) and this generally quiet manner renders his anti-feminine outburst in Act 1 all the more effective.

Rolando Panerai, as Guglielmo, subdues his powerful voice to the needs of the occasion and Léopold Simoneau, as Ferrando, surpasses himself in lovely tone and phrasing.

This strong cast is supported by orchestral playing by the Philharmonia Orchestra under Karajan of the finest quality: one feels every member of the orchestra is giving of his very best. Both singers and players handle their lovely phrases like jewels and throughout the opera the performance, sparkling, tender, witty, vivacious, by turns, gives the maximum of musical enjoyment. In particular, the sensuous beauty that informs Act 1 is perfectly realised.

This superlative issue is notable, also, for the close observance of Mozart’s expression marks, of which one of the most frequent is sotto voce. This we really get: and the asides are real asides. How refreshing this is. It was good to hear Alfonso’s ‘I’ll burst myself with laughter’ coming through so clearly in the adorable letter-writing quintet, and the engineers are to be congratulated on this admirable bit of balance. But the balance is extremely good all through both between the voices themselves and between them and the orchestra. Only in the first quintet (‘Sento, O Dio’) are Alfonso and Guglielmo a little too weak in tone when all five voices are engaged, and Simoneau sounds a little distant in his arias.

Karajan’s tempi seemed to me just right. The Overture chuckles along delightfully and though the allegro molto of the Sextet (alla breve) is taken about as fast as it can safely go the sisters are able to articulate the quavers in their part without any blurring. They do these passages, and those in the last act finale, with brilliant ease and unanimity. The ensemble singing throughout is, indeed, perfect.

The recording covers a wide dynamic range: tonally I have never heard anything better. Listening with friends to this recording in my music room gave the impression that by some miracle the opera was being performed there to a scale proportioned to its size, enabling us to savour the exquisite music without any of the usual distractions.

The comedy is, of course, a highly artificial one, but there are moments when Mozart is certainly not laughing at his puppets, when they take on flesh and blood and are more than vehicles for lovely music: and this is well brought out in this performance. Whatever good things the Mozart celebrations may bring us next year I cannot think that this superb performance and recording will be surpassed." 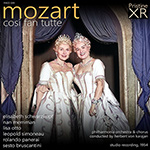