The still enigmatic and underappreciated figure of Ferruccio Busoni (1866-1924) features quite prominently in Jascha Horenstein’s life during the Weimar era. Shortly after moving to Berlin in 1920 he attended a series of rehearsals and concerts of music conducted by Busoni and at the same time became close to several members of the composer’s circle. These included Wladimir Vogel and Kurt Weill, who suggested that he accompany them to the open house that Busoni held every afternoon at his residence in Berlin:

From two to three in the afternoon at his home, Busoni hosted musicians, students and sometimes also painters, writers, poets, architects and scientists from all over the world, and we had the enormous pleasure of being in his company for an hour every day. I attended these gatherings many times but we did not have any conversations, it was he who spoke and we who listened. We studied every word he uttered, it was like being at a sermon in church and we were all too shy to say anything to him. He was very highly organized and worked extremely long hours so that exactly at three o’clock he would leave the room, even if we were in the middle of a discussion, to go back to his composing. I saw this happen several times. He always used to say that inspiration is not a gift that appears by itself but comes only as a result of hard work.

Horenstein’s early experiences of Busoni included witnessing his artistry as a pianist (“he went to the stratosphere”), and continued after the composer’s death when he attended a gala memorial performance of Doktor Faust in Frankfurt conducted by Clemens Krauss in 1927. The following year he included the Indian Fantasy with Busoni’s disciple Egon Petri as soloist at one of his Philharmonic concerts in Berlin but thereafter did not return to Busoni’s music until 1962 when he conducted the premiere in Milan of the Piano Concerto. This concert renewed his interest in the Italian composer, whose music he subsequently featured in his programs with some regularity. He considered Doktor Faust “by far” Busoni’s greatest and most representative composition, a work that “has moments of very great inspiration, the culmination of everything he strived for”, and was delighted by the opportunity to conduct its American premiere. Given in concert form at Carnegie Hall, the occasion marked Horenstein’s first appearance on a New York stage for over twenty years as well as the operatic debut in America of baritone Dietrich Fischer-Dieskau. For the New York Times the event “made an immense impression... a wonderful, exciting, provocative evening, one of the most distinguished of the past few seasons.” The in-house recording, made possibly on Horenstein's instructions and published here for the first time, preserves a masterfully shaped performance of beauty, concentrated power and impact that can stand on an equal footing with some of his most successful concerts.

Curiously, the performance of Doktor Faust did not result in any further engagements for Horenstein in New York until five years later, but was followed almost immediately in the UK by the start of a comprehensive BBC project for which he recorded fourteen of Busoni’s orchestral works to commemorate the composer’s centenary in 1966. If Doktor Faust is included, this collection constitutes the most complete traversal of any composer’s music conducted by Horenstein but the recordings, although preserved in the BBC’s archive, still await their first publication.

You can download an annotated libretto in German and English by clicking here.

You can find a 1968 radio interview with Jascha Horenstein on the subject of Busoni (in French) on YouTube here: https://www.youtube.com/watch?v=OUZWzTYslzE

NB. Although Busoni died in 1924 the opera was completed by Philipp Jarnach (1892-1982) and thus remains in copyright throughout the EU (and some other countries) and we are therefore unable to offer a copy of the score with our downloads. If you live elsewhere and wish to acquire the score a copy can be downloaded from the following webpage: https://imslp.org/wiki/Doktor_Faust_(Busoni%2C_Ferruccio)

As Busoni wrote the libretto himself we're pleased to include an annotated version in German and English with CD track points indicated to correspond with this release. My thanks to Misha Horenstein for his exceptional work in helping realise this project and his extensive work matching up libretto and performance. 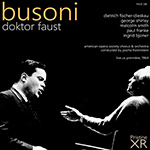 THE Fausts with which we are familiar was not the Faust we heard last night in Carnegie Hall. This one was “Doktor Faust” by Ferruccio Busoni, an opera he never completed. Busoni died in 1924, but he left all of the essential materials for the final scene, which was recon­structed by his pupil, Philip Jarnach.

The opera has had a few performances in Europe, and only last summer it was one of the features of the Maggio Musieale in Florence. Wheth­er it can enter the repertory is a moot question; but about its fascination, its importance, its nobility and beauty, there can be little dispute. “Dok­tor Faust” made an immense impression last night, and Carnegie Hall intermission talk was unanimously of a where-has-this-score-been-all-my-life variety.
Busoni is beginning to come into his own. He was a transitional figure. His music con­tains elements of the past, present and future. The curi­ous thing is that despite cer­tain obvious derivations in Busoni’s writing — '‘Doktor Faust” recalls, at times, Ber­lioz, Liszt, Wagner, Strauss and early Schoenberg — his music is Busoni all the way through. After several hear­ings of “Doktor Faust” those derivations, which at first bulk rather large, are ab­sorbed and forgotten. What overrides all is a tremendous vision, couched in a very per­sonal kind of language that is never trite, never conven­tional, and that has its own kind of magic.
This was the first Ameri­can performance of the opera, and thus to most in the audi­ence it came as a new experi­ence. One of the striking things about the work is its prophetic foreshadowing of the world of “Wozzeck” and “Lulu.” Often there are the­matic snatches, including a disjunct melodic kind of vocal writing, that are startlingly like some sections in “Lulu.” Busoni’s harmonic language was tonal and post-romantic, but the entire spirit of the opera is intensely modern.
The construction of “Doktor Faust,” too, is modern. Busoni often fell back on abstract musical forms — variation, rondo and the like - just as Berg did in his two operas. Also very advanced was Bu­soni’s concept of operatic writ­ing, in which declamation is as important as aria, in which the orchestra takes the main burden of the music, in which there are hardly any set pieces. The big solo of the Duchess is about the only thing in the entire work that can be called an aria.
All this would be imma­terial if the opera did not have substance. But it does. It immediately sets a gripping mood and follows it through with hair-raising intensity. Busoni wrote his own libretto, and. its symbolism is typical of his strong mind, it is hard to think of any composer in history, Wagner especially in­cluded, who has written a text of equal merit. The final scene is poetic symbolism of high order.
The trouble is that “Doktor Faust” is a work that de­mands several hearings. Bu­soni did not flaunt his emo­tions, and often leaned toward reserve. He was an intellec­tual, and his music is not go­ing to make the kind of im­mediate impact that lesser scores can make. Now that the American Opera Society has led the way, perhaps other groups around the country may investigate this striking score. We are in the debt of the American Opera Society for having had the imagina­tion to present this work.
It was presented under most favorable conditions. Dietrich Fischer-Dieskau sang the title role, rounding out a busy fortnight in New York. His artistry and vocal accomplish­ments are known factors, though not even he could en­tirely fit this assignment into his schedule. He sang from the printed note; the other participants from memory.
The other two principals were George Shirley as Mephistopheles and Ingrid Bjoner as the Duchess of Parma. Both of these singers are su­perior artists. Busoni’s Devil is a tenor, and a high tenor at that; and Mr. Shirley’s voice just fit the tessitura of the part. He also conveyed a good deal by facial expres­sion: a sly, urbane, devilish, devil he. Miss Bjoner, with less to do, sang her big aria with fullness of voice and a secure sense of style. In the small role of the Duke there was Paul Franke, reliable and big-voiced as always.
Jascha Horenstein conduct­ed. He has not been active in New York for some years, and this was his local debut as an operatic conductor. Quietly, without, ostentation, he held everything together smoothly, his rhythm was im­peccable and he fully con­veyed the depth and passion of the score. He could have stood a few more violins in his orchestra. At that, though, the American Opera Society used a much larger group than it normally does, and there is just so much room on the stage of Carnegie Hall. It was a wonderful, exciting, provocative evening, one of the most distinguished of the past few seasons.