"This reissue of Ballo is a welcome reminder of the special qualities of its principals . As JBS intimated when it last appeared on LP (6/79), Votto has been under-rated as its conductor: his direction has a truly Verdian élan. This is one of Callas's most compelling assumptions. Certain phrases, such as when she sings "Son di lui", - "I am his" meaning her husband's to Riccardo - remain uniquely accented and convincing. Her Amelia does have more character, presence and sheer spinto quality than that of either soprano on the rival sets. Gobbi is a very different Renato than Bruson, who appears for both Solti (Decca) and Abbado (DG); more incisive, more threatening, but by the same token, rather less smooth in his vocalization; for an ideal "Eri tu", I would want to go far further back in recorded history, to Amato and de Luca. Where Riccardo is concerned, I suppose di Stefano is closer to Pavarotti (SoJti) than to Domingo (Abbado) in giving face to the role. He hasn't so secure a top register as either of his rivals, but my goodness, in the ballata and the love duet he does surpass them both in the involvement and daring of his performance; indeed, I think all three principals are superior to their successors in creating the tension of a live performance as against a studio one. In that respect this is the recording! have always turned to most often, even though in my heart I would have to admit that the Abbado is the more finished and better-produced set. I should add that Barbieri makes a vivid and resourceful Ulrica and Ratti a smiling, pert, if sometimes shrill Oscar.

The DG is, of course, also the more comfortably recorded, although I would suggest that, in its CD manifestation, the EMI is more than respectable in terms of sound. Callas enthusiasts will want this version in any case. Others may find the choice more difficult depending on whether they value the character of individual performances over all-round finish . My own preference is clear; it is for this EMI set."

As we continue our journey through the studio opera recordings made by Maria Callas in the 1950s, in Un ballo in maschera we reach the last of a continuous run of mono opera studio recordings - presented here in Pristine's Ambient Stereo format which, whilst maintaining the central mono sound image, brings space, air and ambience around that image for a more realistic and comfortable listening experience.

Where its major rival, Decca, had pioneered the stereo format, beginning in 1954 despite no domestic reproduction equipment yet offering the new sound, EMI was once again a couple of years or more behind its British counterpart. And whilst the standard of sound engineering was audibly better with each visit to Milan's La Scala Theatre for the annual round of Maria Callas recordings, it still lagged behind the pioneering work of Kenneth Wilkinson and his colleagues at Decca.

This recording nevertheless resides at the sonic peak of the end of the mono era, greatly easing my own work in transforming its sound, through the XR remastering process, into the truly beautiful artefact presented here.

Cover artwork based on a photograph of Maria Callas and Giuseppe Di Stefano in Un Ballo In Maschera, 1957
Recorded at Teatro alla Scala, Milan, 4 - 9 September 1956 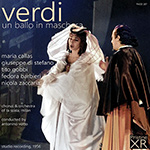