This historic performance of Wagner’s Tristan und Isolde, which opened the 1952 Bayreuth Festival on 23 July, was the first time that the music drama was performed at what was to become known as “Neu Bayreuth” (New Bayreuth) and only the fourth production in the history of the Festival. The first Bayreuth performance, which took place on 25 July 1886, was directed by Wagner’s widow, Cosima, and conducted by Felix Mottl. There were new productions in 1927, directed by the composer’s son, Siegfried, and conducted by Karl Elmendorff, and in 1938, directed by Heinz Tietjen and again conducted by Elmendorff. There were no performances during the war.

Based on the philosophy of Arthur Schopenhauer and likely additionally inspired by his infatuation with Mathilde Wesendonck, who was already married, Tristan und Isolde premiered on 10 June 1865 at the Königliches Hoftheater und Nationaltheater in Munich with Hans von Bülow conducting. It was unprecedented in its use of chromaticism and tonal ambiguity, heard from the very first notes to the very last measures of the work.

The reemergence of the Festival in 1951 after a six-year hiatus was a tremendous achievement. Two of Wagner’s grandsons, the brothers Wieland (born 1917) and Wolfgang (born 1919), were now in the charge of the Festival. It opened with a performance of Beethoven’s Ninth Symphony conducted by Wilhelm Furtwängler. Hans Knappertsbusch and Herbert von Karajan would conduct all the other performances that summer. Six of the music dramas, all in new productions, five designed and directed by Wieland himself ( Parsifal and the complete Ring Cycle) made up the season with Rudolf Otto Hartmann directing Die Meistersinger von Nürnberg. Hartmann would be the only other director ever to direct at Bayreuth until after Wieland’s untimely death in 1966 at the age of 49.

The following year, in addition to the previous six music dramas presented, Tristan und Isolde was added to the repertory. The performance began at 17.00 as the standard modern time of starting the eight longer music dramas at 16.00 did not begin until the 1953 Festival. Once again, Wieland designed and directed and, much like his Parsifal the previous summer (less so his Ring which still had conventional elements to it, though this too had begun to change as well that summer), he created a production in which the stage was stripped of all but the most essential scenery and props and relied more on lighting to establish the mood and locale. Then there was the acting style which kept the singer’s movements and gestures to a bare minimum so as to be able to concentrate solely on the words and music.

Not everyone took to the revolutionary approach of the “Neu Bayreuth” style . Whether the brothers intended this radical break with tradition because of their own artistic visions or for financial concerns for the newly reopened Festival remains a matter of debate, though it was likely a combination of the two. Regardless, there is little doubt that it was an attempt to distance itself from the history of the Festival during the Nazi regime. But something even more important was taking place: the new productions, particularly those by Wieland, were beginning to revolutionize the staging of Wagner’s music dramas, a trend still very much in evidence even today.

German soprano Martha Mödl (1912-2001), our Isolde, had created a sensation as Kundry during the first post-war Festival in Wieland’s legendary production of Parsifal (PACO043). Her Isolde elicited no less praise. “Mödl’s Isolde was one of the finest operatic creations I have ever witnessed…her interpretation grew from within, she was Isolde.” (Harold Rosenthal, Opera Magazine, September 1952). She sang at Bayreuth for 10 consecutive summers, returning for a single Isolde in 1962 and then spent 2 more summers singing Fricka and Waltraute in The Ring and the Alto Solo in Parsifal.

This performance of Tristan und Isolde marked Chilean tenor Ramón Vinay’s (1911-1996) Bayreuth debut. His performance was praised for its “…incredible vocal size and impact, secure power, metallic sound and inexhaustible physical endurance.” (Dr. Helmut Schmidt-Garre, Münchner Merkur, July 1952). During his seven summers at the Festival, in addition to Tristan, he sang Parsifal, Siegmund (heard on PACO040), and Tannhäuser, returning to his baritone roots during the 1962 Festival to sing Friedrich von Telramund in Lohengrin.

Also in his Bayreuth debut is German bass-baritone Hans Hotter (1909-2003) as Kurwenal. His career at Bayreuth is legendary, being the Wotan/Wanderer (heard on PACO039-41) of choice for seven consecutive summers between 1952 and 1958, though he continued to sing the roles there as late as 1966. He also acted as stage director for Wieland’s production of The Ring (his last new production at Bayreuth) in 1967 and 1968. He sang twelve roles in eight of Wagner’s music dramas.

Though she only sang at the first four post-war Festivals, Ukrainian mezzo-soprano Ira Malaniuk (1919-2009), our Brangäne, figured prominently during that time. She sang eight roles in six of the music dramas and as the mezzo-soprano soloist in Beethoven’s Symphony No. 9 both in 1953 and 1954. Her Fricka and Waltruate from the 1953 Festival Ring Cycle can be heard on PACO040 and 042, respectively.

Austrian bass Ludwig Weber (1899-1974), with his dark, mellifluous voice, was a perfect fit for the mournful König Marke and kindly Gurnemanz in Parsifal (heard on PACO043) but could also summon the power to create a terrifying portrayal of Hagen in Götterdämmerung. He portrayed nine roles in seven of the music dramas as well as singing in both the 1951 and 1954 performances of Beethoven’s Ninth Symphony.

German bass-baritone Hermann Uhde (1914-1965), a future Wotan/Wanderer, is luxury casting in the small, but pivotal role of Melot, singing nine roles in seven of the music dramas at Bayreuth over a period of eight seasons. His searing portrayal of the doomed sea captain in Der Fliegende Holländer can be heard in the Bayreuth Festival performance from 1955 on PACO062. He died of a heart attack onstage during a performance of Niels Viggo Bentzon’s Faust III in Copenhagen.

The young Gerhard Stolze (1926-1979), who would soon become a world-renowned Loge, Mime and Herod in Strauss’ Salome, sings the plaintive lines of The Shepherd in Act Three.

In his second and final season on the Grünen Hügel, Herbert von Karajan (1908-1989) caused some concern when he decided that he wanted to change Wagner’s own established seating order in the famous hidden orchestra pit underneath the stage. After trying various arrangements right up through the dress rehearsal, none of which worked, he ultimately went back to the standard seating in time for the premiere. Compared to his EMI recording of almost 20 years later, Karajan here reveals a youthful exuberance missing from his studio recording and delivers an impassioned performance that runs some sixteen minutes shorter than his later version. So, why, after conducting six of Wagner’s mature pieces over two summers, did Karajan never return to Bayreuth? Mödl, in her wonderful autobiography, So war mein Weg (This Was My Way), suggested that Karajan, already interested in directing but in a more traditional manner, perhaps did not feel comfortable with Wieland’s concepts and at that point the Wagner brothers were likely not interested in sharing director duties with him. Regardless, we are fortunate to have this document of his earlier thoughts on the work.

While only a handful of photographs exist to document what the production must have been like, Leonard Bernstein had quite coincidentally chosen Mödl and Vinay to sing selections from Tristan und Isolde on the NBC arts variety program, Omnibus, in the episode entitled “What Makes Opera Grand?” which aired on 23 March 1958. While it of course cannot emulate what Wieland’s production looked or felt like, his influence over their performances is, I believe, quite evident. An economy of movement and a deep understand of the text and music are clearly the hallmarks of their performances that came from having worked closely under his guidance.

Though this production of Tristan und Isolde lasted only two summers, Harold Rosenthal wrote in the September 1952 issue of Opera Magazine: “Here for the first time in my experience was a Tristan und Isolde in which stage, orchestra, singers, conductor, costumes, lighting, in fact all the elements that go to make up an operatic production, were merged into a unity such as Wagner could only have dreamed of.” Even without the benefit of the visual aspects of the production, listening to this sonically restored edition clearly bears that out.

XR Remastered by  Andrew Rose
Cover artwork based on a photograph of Martha Mödl and Ramón Vinay as Isolde and Tristan
Recorded Bayreuth, 23 July 1952
Special thanks to Michael Scarola 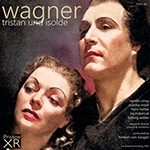