Orchestra and Chorus of the Metropolitan Opera
Conducted by Fritz Stiedry

Wagner’s sacred festival play, Parsifal, was his last opera and the only one written specifically for his new theatre in Bayreuth. For many years following its premiere in 1882 it could only be heard at Bayreuth with the first (unauthorised) performance elsewhere being given at the Metropolitan Opera in 1903. Parsifal touches on themes of guilt, loss and grief, but also faith, love, and redemption. Like all Wagner’s operas it requires singers with stamina, but also those who can intelligently convey textual meaning. The conductor is also key since there are several sustained orchestral passages throughout the opera.

This 1954 Metropolitan Opera broadcast of Parsifal gave the radio audience a unique chance to hear some of the greatest Wagnerian singers of the age in important roles they performed comparatively rarely. Indeed, the opera, despite being performed almost every year at the Met since 1903, was conspicuously absent from the broadcast schedules between 1938 and 1952. When Texaco assumed the sponsorship of the broadcasts in 1940 an audience survey was undertaken to determine which were the most popular operas, and of Wagner’s operas only Tristan und Isolde, Die Walküre and Lohengrin scored highly enough to be considered for regular broadcasts. Consequently, just these three, plus the occasional Tannhäuser and Die Meistersinger von Nürnberg, were heard on the nationwide broadcasts during the 1940s. Only with the arrival of Rudolf Bing as General Manager in 1950 did the policy change and in his first season the complete Ring Cycle plus Der Fliegende Holländer were added to the broadcast schedule. In 1952 Parsifal returned to the airways after a fourteen-year absence. This broadcast was only the third time the opera had been heard complete since the Met began its matinee broadcasts in 1931.

The main draw for opera lovers is surely the Gurnemanz of the great German bass-baritone Hans Hotter, singing the role for the first time in his career. Already well established in Europe as a leading Wagnerian, Hotter had a disappointingly brief Met career, just thirty-nine performances in 4 seasons and this broadcast was his very last performance at the Met. In his first season he had triumphed as the Dutchman and Wotan but by 1954 he was being allocated Hunding rather than Wotan in the broadcast of Die Walküre. General Manager Rudolf Bing seemed to take a perverse delight in promoting those who did not sing at Bayreuth to key Wagnerian roles. Perhaps unsurprisingly Hotter decided to return to Europe where he would continue to reign supreme at Bayreuth and Covent Garden for another decade. This is the only time Hotter sang Gurnemanz at the Met, and we should be grateful for such an intelligent and nuanced singer in this pivotal role. Hotter has gravitas to spare, but also security of tone and a talent with the text that betrays his expertise as a lieder singer.

This is also the only Met broadcast to feature Astrid Varnay as Kundry. It was a role she sang rarely, even in Europe, so we are again fortunate to hear one of the major Wagnerian sopranos of the 1940s and 1950s in such an important role. Varnay was an established Brünnhilde, Isolde, Elsa and Elizabeth and the steely edge to her voice is actually well suited to Kundry. She softens her tone nicely in the second act attempted seduction of Parsifal but the steel is always lying just under the surface, just as the image Kundry projects of herself is a veneer on top of something more sinister. Unlike some other singers who have tackled Kundry, the powerful declamatory parts of the role hold no terrors for Varnay who hurls out the top notes with exciting abandon.

Swedish tenor Set Svanholm made his Met debut in November 1946, and for the next ten seasons principally (though not exclusively) sang Wagnerian roles. After Lauritz Melchior departed the Met in 1950 he became Rudolf Bing’s favoured Tristan and Siegfried, and while he never had Melchior’s gleaming tone, he brought a lyricism that had been lacking in many Wagnerian heldentenors. As Parsifal he is committed and sensitive, and as one of the shorter heldentenor roles there are no concerns about vocal tiredness. Although he had sung in Bayreuth during the war he was not invited back after the festival re-opened in 1951. Instead he became Kirsten Flagstad’s partner of choice in her post-war career, appearing alongside her in New York, London, Milan, Buenos Aries, Chicago, San Francisco, Los Angeles and in the recording studio.

George London is Amfortas. The young American was only 33 at the time of this broadcast but his Wagnerian credentials were already firmly established, including a recording of him in this role made at the 1951 Bayreuth Festival by Decca. His rich voice is full of pathos and already hints at the major Wagnerian career he would have ahead of him. The New York Times believed ‘he proved well equipped to meet the demands of the role and, as a characterisation, his Amfortas had power and conviction.’

Gerhard Pechner was scheduled to sing the role of Klingsor but became indisposed during the first act and was replaced at the last minute by Lawrence Davidson. The start of the second act was actually delayed while Mr. Davidson prepared to go on. And in smaller roles are singers who would become major principals with the company just a few years later: Lucine Amara, Mildred Miller and James McCracken.

Conductor Fritz Stiedry left his native Austria in 1933 firstly for the Soviet Union and later the United States. In 1946 he began a 12-year association with the Metropolitan Opera, conducting more than 300 performances, specialising in Wagner and Mozart. The live recordings of his Met broadcasts add immeasurably to our understanding of him as a conductor and he particularly excels in drawing out the musical contrasts between the sacred (acts 1 and 3) and the secular (act 2).

7. RADIO Parsifal Discussion*  (15:40)
During the live broadcast of Parsifal, "Opera News On The Air" was transmitted between the first and second acts, featuring an illustrated discussion with host Boris Goldovsky and guests Rose Bampton and Charles Kullman. Here we reproduce it in full, as broadcast. 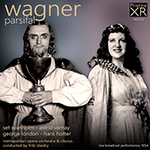