The late 1950s were good for Horenstein in the concert hall, less good in the recording studio. In January 1958 he conducted a memorable performance of Mahler's Ninth in London, followed later by the Fifth and the Eighth that first alerted British audiences of his affinity for this repertoire, and in February he made his long awaited return to Berlin after twenty-five years, substituting for another conductor at a concert without prior rehearsal that included Schoenberg's Verklaerte Nacht. Towards the end of 1958 he was called upon to take care of another emergency when Klemperer developed bronchitis and then, five days later, nearly died after an accident left severe second and third degree burns over large parts of his body.

Klemperer's misfortune, which put him out of action for around nine months, was Horenstein's gain after a frantic management begged him to take over from his disabled colleague for this live performance of the Missa Solemnis, one of the most difficult works in the repertoire and the opening event of the centenary edition of the Leeds Triennial Festival. At a press conference explaining the change of conductor, the Earl of Harewood, Director-General of the Festival, told disappointed members of the 320-strong Leeds Festival Chorus that Horenstein “knows the work well – one of the few conductors who do”, an observation that might have amused or terrified him since he had never before conducted the piece! Horenstein accepted the engagement only nine days before the concert and during a period that also included two appearances with the London Symphony Orchestra in Swansea almost 300 miles away, which meant traveling back and forth between the two cities for rehearsals. Critical opinion of the Missa performance was generally favorable, more so in the regional newspapers of the north than in the national press from London, with particular praise directed at the chorus and the soloists, although all found the acoustics of the Victoria Hall in Leeds wanting for clarity and definition.

Horenstein's appearance at the festival, in the presence of several members of the Royal Family, brought him much-needed exposure and recognition, aided by extensive pre- and post-event media coverage that included a BBC relay of his first Swansea concert with the LSO, a nationwide broadcast of his Vox recording of Beethoven's Ninth as well as a live transmission of the Missa Solemnis, all within the space of a week.

The concert in Leeds raised his profile with the public (though not with the record companies), and at the BBC, which invited him to conduct the work again and then record it in London in February 1961. In his liner notes to the release of that recording on the BBC's “Legends” label, Joel Lazar, who served as Horenstein's assistant for two years, defined the qualities that enabled him to interpret the work with such conviction: “It called upon his ability to strike a balance between intensely defined episodes and long structural arcs, between formal organization and deeply felt pathos, and offered him the opportunity to elicit both textural refinement and powerful orchestral sonority. It was precisely the size, stylistic diversity and wide affective range of works such as the Missa Solemnis which attracted him due to the intellectual and artistic challenges they posed, as well as the profound satisfaction gained by leading performers and audience alike through the complex emotional, spiritual and philosophical voyages they offered. The power of Jascha Horenstein’s performance of the Missa Solemnis lay in his ability to accept and characterize to the utmost all the different musics within it without losing track of long-range tonal movement, rhythmic and metric coherence and large-scale formal arch.” 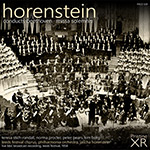 Few more impressive works could have been chosen for opening a festival primarily devoted to choral music, and few festivals could have had a more inspiring opening.

In this giant work, a monument as much to his symphonic powers as to his long-tempered faith, Beethoven deliberately forced his style into the liturgical crucible. If both are sometimes strained in the impact, the tremendous power which this fusion generates is both spiritually and musically overwhelming.

And overwhelming was the effect of this opening performance by the Philharmonia Orchestra and the Festival Chorus under Jascha Horenstein. The sheer volume of sound which the chorus was able to sustain was impressive enough, but a much more difficult achievement was that this did not destroy the music’s subtleties. In this Mass, Beethoven raised a great cry to heaven, but he also thought and fought out his faith. Singers and orchestra showed that they knew it.

Even better did Jascha Horenstein know it. His strong control and firm, penetrating rhythms held the music taut and balanced, even through the arid passages of the middle section of the Credo, and his imperious command of both chorus and orchestra gave them added aggressiveness.

Considering that Mr. Horenstein had to take this concert almost at the last minute through the illness of Otto Klemperer, his was a formidable achievement.

From the tremendous fugues of the Gloria and the Credo to the tranquillities of the Dona Nobis, the performance encompassed the emotional ranges of the work— never easily, since there is no easiness in it, but with majesty and domination. To hear nearly 300 voices drop from the intensities of the Gloria to the hush of “adoramus te” was breathtaking; to feel the gradual building of the finale of the Agnus Dei was awesome.

Of course not everything was perfect. Beethoven did not write that sort of music. The strain of some of the high, fast passages forced the singers into lack of definition, and the chorus was too large to sing quietly without losing distinctness. In the Praludium between the Sanctus and the Benedictus, Mr. Horenstein for once gave the impression of not being quite clear about the direction of the music, and the organ vibrato spoilt the conclusion of the passage.

The four soloists spent much of the work in a struggle against the tremendous forces behind them, and the effort occasionally told on trie quality of their singing. But men liberated, as in the Benedictus, they gave a splendid performance, with the solo violin soaring above them in that superb, beautiful obbligato.

Peter Pears was the weakest of the four, perhaps because his particular talents are not suited to choral music of such massiveness. Teresa Stitch-Randall and Norma Procter both sang very well, if rather independently of each other, since Miss Stitch-Randall’s more florid and dramatic voice made an unexpected contrast against Miss Procter’s strong, straightforward contralto.

Kim Borg, the bass, had the strongest of the four voices, and the most memorable of all the individual solo passages was his opening of the Agnus Dei, when from the dark desperate music he drew a prayer of true nobility. If, in this Mass, Beethoven faces God as a free man in his dignity, responsible alike for his sins and his triumphs this moment symbolised the whole.

But it is the staggering impact of the chorus which leaves the most profound impression. Drive, solidarity, and incisiveness are the characteristics demanded by this Mass, and they are the traditional qualities of Yorkshire choruses. Rarely have they come more dramatically together than they did for the opening of this centenary Leeds Festival.