This 1956 recording of La Bohème continues to stand out in the catalogue. Soloists and conductor combined to create a classic of recorded opera oozing with musicality. This remarkable achievement occurred despite the cast and conductor having little rehearsal time or previous collaborations to fall back on. This was the only time Beecham and Björling worked together, and while Björling and de los Angeles had recorded Pagliacci in 1953 and appeared in four performances of Faust at the Metropolitan the same year, they never sang in a performance of La Bohème on the same stage.

Rodolfo was Jussi Björling’s most frequent stage role (with 114 performances) and it lasted the longest in his repertoire (1934-1960). In an opera packed with memorable tunes Rodolfo has many of them and Björling’s truly beautiful voice captures the poetic tenderness of the exchanges with Mimi in act one before easing into the lyricism needed for the aria and closing duet. As someone not particularly renowned for his stage acting, it is to our benefit that Björling does all his acting with his voice. As the tragedy of Mimì’s illness unfolds Björling is able to expose Rodolfo’s despair simply via his vocal timbre and colouring. Only the hard-hearted can listen to act four without a tear and those who persist in thinking as Björling as a ‘cold’ singer are surely disproved by this display of true Italianate style.

Spanish lyric soprano Victoria de los Angeles sings Mimì. During the 1950s she sang roles such as Marguerite, Butterfly, Rosina, and Massenet’s Manon in most of the leading opera houses of the world. As Mimì she brings us pure, liquid, legato singing, full of pathos. Her Mimì is fragile and tender, a perfect companion for her Rodolfo. Although they only sang together a few times de los Angeles was overwhelmed by Björling’s voice, describing it as ‘far, far, more beautiful’ in person than was ever captured on record.

Robert Merrill sang most of the leading baritone roles in Italian and French opera over the course of a thirty-one-year career at the Metropolitan opera (1945-1976). He appeared on stage regularly with both Björling and de los Angeles and made a number of very popular recordings of operatic duets with Björling in 1950-1. Lucine Amara, at 32, was the youngest of the four principals in this recording (Björling was the oldest at 45), and is the only one still living at the ripe old age of 95. Her extensive Met career lasted from 1950 until 1991 during which she sang most of the principal Italian and French soprano roles.

Thomas Beecham was one of the world’s most renowned conductors in 1956. His recorded legacy is dominated by orchestral music and this has tended to disguise his extensive operatic experience. Before World War II he was the leading figure in establishing international seasons at Covent Garden that attracted the world’s best singers including Frida Lieder, Kirsten Flagstad, Lauritz Melchior, Beniamino Gigli, Richard Tauber and, in 1939, Jussi Björling. Beecham had met Puccini in the 1920s and discussed the score of La Bohème with him. While he perhaps cannot claim the intimate knowledge of the composer’s thoughts that Toscanini possessed, Beecham’s recording of the opera must be one of very few that reflected conversations with the composer. 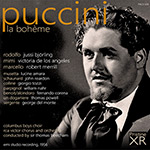