Richard Wagner’s Lohengrin has played an important part in the history of the Metropolitan Opera since its inaugural season in the Old House at 39th and Broadway. It was the very first Wagner opera ever performed by the company on 7 November 1883. Sung in Italian (as were all the operas that first season), the cast included Italo Campanini and Christine Nilsson, who had just opened the opera house a few weeks earlier in Faust. It reverted to its original German the following season and the opera was presented consecutively for nine seasons in a row. It was also the first Wagner opera ever broadcast by the Met when on 9 January 1932, the third act was heard with Max Lorenz, Maria Müller, Karin Branzell and conducted by Artur Bodanzky. To date, it has had 618 performances, more than any other of Wagner’s works. Many consider Lohengrin the most Italianate of all of the composer’s operas with clearly delineated arias, duets, and ensembles, which perhaps accounts for its popularity.

The opera has also proved very popular for both singers and conductors to introduce themselves to Metropolitan Opera audiences. Even a partial list reads like a Who’s Who of some of the greatest Wagnerian performers of all time. Brothers Jean and Edouard de Reszke debuted on the same evening in 1891 in the title role and König Heinrich, respectively. Joining them was Emma Eames making her debut as Elsa. Ernestine Schumann-Heink made her Met debut as Ortud in 1898. Tenor Torsten Ralf and conductor Fritz Busch both made their debuts on Opening Night of the 1945-46 season. Hermann Uhde appeared at the house for the first time as Telramund in 1955. Ingrid Bjoner and Sándor Kónya were first heard as the protagonists in 1961, and Elisabeth Grümmer introduced her Elsa to New York in 1967. In more recent times, four tenors chose the Swan Knight for their debuts: René Kollo on opening night of the new production in 1976, Siegfried Jerusalem and Peter Hofmann, both in 1980, and Klaus Florian Vogt in 2006. Three outstanding conductors, known for specializing in the Wagnerian repertory, also used the work as their debut vehicle: Anton Seidl in 1885, Alfred Hertz in 1902, and Karl Riedel in 1929. Perhaps the most important of all these debuts, was unfortunately, not to be. Wieland Wagner was preparing a new production of his grandfather’s opera for the inaugural season of the new house at Lincoln Center in 1966. Ill health, however, prevented him from coming to New York to mount the work and he died less than two months before the premiere. His assistant, Peter Lehmann, using Wagner's own notes and basing it on similar stagings he had used in Bayreuth and Hamburg, directed the production in his stead.

The 1939–40 season proved to be a banner year for Wagner at the Met when no fewer than six broadcasts of five of his operas were presented ( Die Walküre was broadcast twice). As Mrs. August Belmont, a member of the Metropolitan Opera board, reminds us during the first intermission, the Met was in the midst of a critical financial crisis. There was an extensive fund-raising campaign throughout the season and General Director Edward Johnson knew that the Wagnerian singers on his roster were sure-fire box office draws for audiences both in the house and on the radio. This was, after all, by all accounts, the golden age of Wagnerian singing. Kirsten Flagstad, Lotte Lehmann, Elizabeth Rethberg, Marjorie Lawrence, Kersten Thorborg, Karin Branzell, Lauritz Melchior, Friedrich Schorr, Herbert Janssen, Julius Huehn, Emanuel List, and Ludwig Hofmann were all a part of the firmament. And sure enough, no fewer than four of these illustrious singers play an integral role in this broadcast.

It seems almost superfluous to acknowledge that Danish tenor Lauritz Melchior (1890-1973) was the greatest Heldentenor tenor of his, or possibly, any generation. Yet one never ceases to be amazed by the apparent effortlessness of his singing of some of the most difficult music ever written. Even Milton Cross himself says during the curtain calls following the second act: “Lauritz Melchior, who carries off these heroic Wagnerian roles with such telling effect.” But unlike Siegfried or Tristan (both available on PACO139 and PACO150, respectively) Lohengrin requires extensive lyrical singing and here is where Melchior surprises us. From his opening farewell to the swan that has carried him to Brabant to his tender farewell to Elsa, Melchior’s singing emulates the greatest exponents of the bel canto tradition. Making his Met debut as Tannhäuser on 17 February 1926, Melchior sang Lohengrin (of which this is the fourth of his ten broadcasts of the role) a total of 68 times at the Met. His penultimate performance of the role also proved to be his final Met broadcast on 7 January 1950. A little less than a month later, on 2 February 1950, he would sing the role one last time and his magnificent 24-year Met career would come to an end.

Aïda was the role that served as both the Met debut (22 November 1922) and farewell (6 March 1942) of German soprano Elisabeth Rethberg (1894-1976). She also sang the role in the very first Met broadcast of the opera in 1932. During her twenty-year Met career, she sang most of the Wagnerian Jugendlich dramatischer Sopran roles and even sang two performances of the Siegfried Brünnhilde in her final season with the company. She was also a noted Madama Butterfly and Leonora in Il Trovatore. Rethberg participated in the very first broadcast sponsored by Texaco on 7 December 1940 singing the Countess Almaviva in Le Nozze di Figaro. She sang almost 400 performances of 29 roles with the company, two of which were US premieres. Rethberg sang Elsa twenty times with the company and this was her third and final broadcast of the opera.

One need not look any further than this broadcast to understand the level of Wagnerian singing during the Met at this time when it was able to turn to Kerstin Thorborg (1896-1970) to step in at short notice to replace her ailing colleague, Karin Branzell, to sing Ortrud on this afternoon. The Swedish mezzo-soprano made her Met debut as Fricka in Die Walküre on 21 December 1936 and sang in all ten of Wagner’s mature operas during her 14-year career with the company. She sang in the first Met broadcasts of Orfeo ed Euridice and Der Rosenkavalier, both in 1938, and Boris Godunov in 1939. Thorborg sang Ortud 27 times with the Met and this was the first of her six broadcasts of the role. Her final performance took place on 8 February 1950 as Magdalene in Die Meistersinger von Nürnberg.

Our Telramund, American baritone Julius Huehn (b. 1904), made his Met debut in Lohengrin, but as The Herald on 21 December 1935. Within in two years he transitioned to the role we hear him sing on this recording. This was his third and final broadcast of the role. During his 11-year Met career he sang almost all of the important Wagnerian baritone roles, Kurwenal in Tristan und Isolde being his most performed role with the company, singing it 56 times. Huehn sang in the Met broadcast premieres of Die Meistersinger von Nürnberg, Gianni Schicchi (in English) and Fidelio (his 1941 broadcast of the opera is available on PACO117), all in 1936. Singing twenty roles in over 200 performances, he made his farewell on 23 March 1946 as Wolfram in Tannhäuser. After leaving the Met, Huehn taught voice at the Eastman School of Music in Rochester, New York, until his death in 1971.

Viennese-born Emanuel List (1888-1967) was the preeminent Wagnerian bass at the Metropolitan Opera between his debut as Hermann in Tannhäuser on 27 December 1933 and his farewell as Baron Ochs in Der Rosenkavalier on 1 April 1950. He astonishingly sang all but 9 performances of the opera during his 17-year Met career and it was his most performed role with the company, performing it 75 times. He sang eleven roles in all ten of Wagner’s mature works as well as operas by Mozart, Beethoven and Saint-Saëns for a total of 448 performances. He sang in the first Met broadcasts of Salome in 1934,Die Meistersinger von Nürnberg, Fidelio and Samson et Dalila in 1936 and Der Rosenkavalier in 1938. He will undoubtably be remembered for his memorable portrayal of Hunding in the historic recording of Act One of Die Walküre recorded in 1935 with Lotte Lehmann, Lauritz Melchior, and conducted by Bruno Walter (available on PACO024). List Hall at the Metropolitan Opera House is named in his honour.

Leonard Warren (1911-1960) made his first appearance with the Metropolitan Opera in a Gala Concert on 27 November 1938, and his official debut was as Paolo in Simon Boccanegra on 13 January 1939. Acclaimed as one of the greatest American Verdi baritones of all time (he sang 12 roles in 11 of the composer’s works), he performed a total of 657 times with the company in a vast array of roles from Ilo in the world premiere of Menotti’s The Island God to Rangoni in Boris Godunov. Perhaps his most famous portrayal was that of the hunchback Rigoletto, which he performed at the Met 89 times (his second of nine broadcasts of the opera is available on PACO143). As fate would have it, his very first performance of the role in 1943 would be heard by the radio audience, as he agreed to step in for an ailing Lawrence Tibbett even though he had just sung Renato in Un Ballo in Maschera the previous evening. Warren had just sung the title role in a new production of Simon Boccanegra three days before his untimely death at 48 years old during a performance of La Forza del Destino on 4 March 1960.

Erich Leinsdorf (1912-1993) was recommended to the Metropolitan Opera by no less than Arturo Toscanini when the company realized that it needed a conductor to assist Artur Bodanzky with his taxing schedule during the 1937-38 season. This proved to be a wise move by the company for when Bodanzky took ill on the evening of 21 January 1938, it allowed the 25-year old Leinsdorf to step in to make his debut conducting Die Walküre. It was the beginning of what would be an illustrious, if somewhat turbulent, career for the young Viennese maestro. He would stay with the company on and off for forty-five years, conducting his final performance on 5 March 1983 (a broadcast performance of Arabella), and tallying up a total of 483 performances of 28 operas. One of the most interesting aspects of this performance of Lohengrin, the first of four broadcasts he would conduct of the opera, are the many cuts that he restores. During the Bodanzky years, a typical performance of Lohengrin would cut up to as many as 684 measures of music. Leinsdorf, now virtually in charge of the German wing of the company after Bodanzky’s sudden death just four days before the opening of the 1939-40 season, would restore 247 of them on this afternoon. Perhaps one of Leinsdorf’s most significant legacies to Metropolitan Opera broadcast history were his performances of the first uncut presentation of Wagner’s Ring Cycle to be heard complete during the 1961-62 season (available on PACO152, 153, 155 and 156).

A set of newly-discovered unused acetate discs served as the basis for this release giving us the opportunity to hear the voices of some of the greatest Wagnerian singers of any generation as never before and is sonically quite possibly the best of Melchior’s numerous live recordings of the opera. A special feature of this release is some of Milton Cross’ erudite commentary which sets the mood and transports us back to the time when Wagnerian singing reached its zenith and helped to keep the Metropolitan Opera alive for years to come. 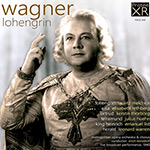