Giacomo Puccini’s third opera, Manon Lescaut, premiered at the Teatro Regio, Turin in 1893 and was the first of his operas to garner international acclaim. Musically the opera showed clear evidence of Puccini’s growing mastery of tuneful lyricism and his ability to evoke a sense of place. The story of a doomed heroine was one that Puccini would return to with even greater success in La Bohème (1896), Tosca (1900) and Madama Butterfly (1904). The New York premiere in 1907 featured Lina Cavalieri, Enrico Caruso and Antonio Scotti in the cast, and Puccini himself in the audience, but fell out of the repertoire in between 1929 and 1949.

When a new Met production of Manon Lescaut was mounted in 1949 it featured Swedish tenor Jussi Björling as Des Grieux. Björling learned only two new roles after branching out from his operatic home at the Royal Swedish Opera in the late 1930s. One was Don Carlo, which opened Rudolf Bing’s tenure as general manager of the Metropolitan Opera in November 1950, the other was Des Grieux in Manon Lescaut. Over ten years, between 1949 and 1959, Björling sang the role just 25 times, but we have no less than four complete recordings of him in this opera: the Met’s first ever broadcast of the opera in 1949, a studio recording in 1954, this Met broadcast from 1956, and a bi-lingual broadcast from Stockholm in 1959. Only his Manrico in Il Trovatore is better preserved with six complete recordings. The Met broadcast of 1956 is by far the most exciting of Björling’s four recordings, capturing the full range of his vocal colours, his resplendent tone, and above all his passion. The opening aria, ‘Tra voi, belle’ has just the right degree of lightness and frivolity, but by Act 3 ‘Non! Pazzo son!’ is tormented, anguished and replete with as much dramatic tension as anyone could want. The duet in Act 4 allows him to showcase his exceptionally beautiful voice (including a soaring, seemingly effortless, high C).

Björling had a complicated relationship with the Met’s management, and one might wish that he had appeared more frequently, particularly in broadcasts. But, on the other hand, this has tended to make the broadcasts that do exist especially precious. Björling appeared only four times at the Met during the 1955-56 season, but he was far from idle. He featured on NBC-TV in an extract from La Bohème with Renata Tebaldi on 30 March, and was recording the now legendary La Bohème for EMI with Victoria de los Angeles under Sir Thomas Beecham at the Manhattan Studios in the days just before and just after this broadcast.

Licia Albanese sings the role of Manon. The Italian-born lyric soprano’s uniquely vulnerable tone made her ideally suited for the most tragic female operatic roles. During her twenty-six seasons at the Met (1940-1966) she was best known for her portrayals of Madama Butterfly, Mimì, Violetta, Marguerite, Micaëla, and Manon Lescaut. Her musical intelligence as well as the pathos she brings to the part of Manon is wonderfully evident. At the same time the fragility conveyed by her voice does not mean she is outdone by her partners, and she readily matches the vocal power of Björling in their duets.

The other parts are sung by versatile Met regulars. Baritone Frank Guarrera (Lescaut) appeared in almost 700 performances at the Met between 1948 and 1976; Fernando Corena (Geronte) was even more prolific, during his Met career spanning 1954 to 1978. There are also early appearances by mezzo-sporano Rosalind Elias at the start of a Met career that lasted more than 40 years, and James McCracken who would later graduate to roles such as Otello, Samson, and Tannhäuser.

While the Met tended to rely on ‘house’ conductors, who spent the majority of their careers at the Met, the opera house occasionally they employed conductors with extensive symphony orchestra experience. In the 1940s stars such as Bruno Walter and Sir Thomas Beecham featured, and in the 1950s Pierre Monteux and Rudolf Kempe. This broadcast is conducted by Dimitri Mitropoulos who would have been best known to the audience as the conductor of the New York Philharmonic. His operatic experience was extensive. He conducted in numerous European opera houses as well as the Met and did concert performances of opera with the New York Philharmonic. He has complete mastery of the lightness required in the early acts of Manon Lescaut, while driving the tension forcefully later on. Mitropoulos also very skilfully allows the orchestra to establish the desolation of the final act.

NB. Due to the length of the combined first and second acts being almost exactly the length of a single CD we initially cut the opening introduction by Milton Cross for radio listeners. After some thought we reinstated it as a separate bonus track for those who'd like to hear it. For download and streaming listeners it appears in its correct place before the beginning of the opera, whereas for CD listeners it appears as an extra track at the end of CD 2. 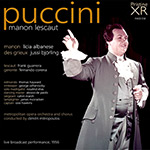 For those who value the fine vocal art this is a winter in which the appearances of Jussi Björling have been too few, and decidedly too far apart. It began promisingly, with a Carnegie Hall recital followed by an appearance with Renata Tebaldi at a Symphony of the Air concert. But little has been heard of him at the Metropolitan Opera, which made his recent appearance for a Saturday broadcast of "Manon Lescaut" with Licia Albanese all the more notable.

November 24, 1958, is a date in the fairly near future, but when it rolls around Björling will have been singing at the Metropolitan for twenty years. To judge from the freshness and warmth, the solidity and ring of the sound he is currently producing, this should be but a waypoint on a singing career paralleled by few tenors of our time. With all respect for those who have done the lion's share of the roaring at the Metropolitan this season, Björling brings something individual, refined, and cherishable into the operatic jungle, which -- to say the least - more should have the opportunity to enjoy.

With such so staunch a partner as Licia Albanese to give her own skilful version of the heroine and Dimitri Mitropoulos providing responsive leadership, this was the best account of Puccini's earliest masterpiece to be heard this season. Luster and ring are no longer the characteristics of the Albanese voice, but she manipulates it with more finesse than ever and, in such a role as this, with a kind of characterization that puts no barriers between the composer's creation and the audience. Chalk up another strong non-comic characterization for Fernando Corena as Geronte, a capable Lescaut by Frank Guarrera, and excellent efforts in smaller parts by Rosalind Elias, Thomas Hayward, and Alessio di Paolis. Here was an occasion to which the management could point - if it was vulgarly disposed - with pride.

A sparkling performance, capturing the best of Björling’s appearances as Des Grieux in excellent, refurbished sound

Newly released by Pristine in their splendid XR remastering, this recording of Puccini’s third opera and his first great success has claims to superiority over the famous studio recording of two years previously with the same two principals, especially now that its refurbished sound allows us to hear more vividly the drama and immediacy of a live, stage performance which clearly caught fire., Of course both this and the studio version were in mono sound, which means that however well this live broadcast has been refurbished, the sound will lack the velour of modern digital recordings, but Pristine’s engineer Andrew Rose has greatly enhanced its presence by rendering it in “Ambient Stereo”, even if he has been unable to remove completely the papery overlay and distortion in climaxes.

The cast here is clearly inspired by the extra verve and indulgence Mitropoulos’s conducting imparts to proceedings; the whole performance is irradiated by a special thrust and energy. Perlea made a fine job of the studio recording, but Mitropoulos brings a swing, lift and lilt to this that I hear in no other recording of this most tuneful of Puccini’s operas. My only reservations are that the famous Intermezzo is a bit choppy, lacking the grand Romantic thrust brought to it by Sinopoli and Levine, and the substitution of Met regular Frank Guarrera, fine artist though he was, for Robert Merrill must give some cause for regret, as Merrill was an incomparable Lescaut in that studio version under Perlea. Nonetheless, Guarrera is a strong presence and the supporting cast is really first-rate, featuring half a dozen famous – or soon to be famous – names, like Rosalind Elias, at the beginning of her forty-year career at the Met, and James McCracken – very noticeable as an Otello-voiced Lamplighter. Thomas Hayward is once more an elegant Edmondo, as he was in the 1949 recording; Corena is a burly, vivid Geronte.

This is the best all-round of the four recordings we have of Björling as Des Grieux, a role he sang only twenty-five times in total over his career but which was surely one of his most successful. There is a good live recording from 1949 on the Naxos label where he is well partnered by Dorothy Kirsten but obviously in inferior sound and another broadcast from Sweden in 1959 where he sings in Italian but everyone else sings in Swedish, which is hardly ideal. There is not so great a difference between them that I would urge anyone to replace the 1954 studio version with this one – both are splendid but certain things like Björling’s top notes are even more striking live here and he is in gleaming, voice throughout, as indeed he usually was right up until his untimely death. For some reason, even though this is two years after their studio recording, both he and Albanese sound more youthful here, live on stage, although she cannot shake off a certain matronliness of tone and a glottal catch seemingly intrinsic to her voice – but what a lovely “In quelle trine morbide” she sings, earning deserved applause. She has such great technique, too: pinging top notes, secure trills, lovely integration of registers – a proper singer. You can hear just how big their voices are when they reach the climax of their duets; neither drowns out the other, both are very audible and it’s thrilling.

It is also gratifying to hear the ecstatic audience reaction to highlights like “Donna non vidi mai” even if they do interrupt the action – and I know some people like the extra atmosphere imparted by the inclusion of Milton Cross’ announcements; his opening announcement has been included as an addendum to CD2.