Berlioz was undoubtedly one of Thomas Beecham’s favourite composers. He conducted Berlioz’s music even when it was unfashionable, and after the war he was one of several conductors responsible for a reassessment of Berlioz’s merits. In 1947 he conducted a radio performance of Berlioz’s epic opera, Les Troyens, and throughout the 1950s regularly programmed pieces by Berlioz in his concerts.

Beecham conducted Berlioz’s La Grande Messe des Morts on several occasions, but this is the sole recording of his interpretation of this work. He had conducted the piece in 1958 in the Royal Festival Hall but found the results rather disappointing. The space was too constricted to permit the full orchestral requirements from the score, and the LPO chorus was not as polished as he would have liked. Beecham decided to try again in late 1959, this time in the much larger Royal Albert Hall, with a significantly larger orchestra, and a smaller but better-trained chorus. The result was a triumph. The Times praised his ‘remarkable ear of orchestral balance’ that produced a ‘magnificently vital performance.’ The Times wished that the radio audience had been able to hear the work in stereo to appreciate Beecham’s careful spacing of the instrumental forces in the hall, including some in the boxes. The BBC did not record it in stereo, unfortunately, though the ambient stereo version presented here gives us some sense of how the audience in the hall heard it at the time.

The soloist is the Welsh tenor Richard Lewis, a well-known recitalist, concert and opera performer in Britain in the 1950s and 1960s. He was particularly famed for his Gerontius (see PASC525) and his Mozart roles at Glyndebourne, but was also one of the few able to cope with complex roles in new operas such as King Priam and Moses and Aaron.

This was Beecham’s last concert in the Royal Albert Hall. He gave his last concert (in Portsmouth) less than six months later in May 1960, and died in March 1961. 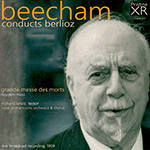 Berlioz’s astonishing Requiem is a work very dear to the heart of Sir Thomas Beecham. He has in any case a special sympathy for the mixture of passion and fastidiousness, elegance and sonorous curiosity in Berlioz, all indeed which poises this genius between classic and romantic ideals, and therewith made him for so long an enigma in the story of music. The Requiem, if not the greatest of Berlioz’s works, has a special curiosity appeal since it is gravely noble as well as amazingly original: the contrast of timbres and textures between movements is itself striking, and to these Berlioz adds many, many new effects whose realization gives special scope to another of Sir Thomas Beecham’s qualities, his remarkable ear for orchestral balance.

A year ago he conducted the work in the Festival Hall, but it does not belong there; it requires space and resonance for those sonorities to tell as Berlioz intended. He calculated his music for performance at a solemn national ceremony in the Parisian church of Les Invalides, and the music comes to life only in similar acoustical surroundings. Those of the Albert Hall, for instance; and it was there that Sir Thomas Beecham conducted the work last night in a magnificently vital performance which, fortunately, could be heard by radio listeners as well as the throng that packed the hall.

The music needs stereophony at least and visible presence ideally not only for the antiphony of the four brass bands (two on the platform, and two in the second tier of boxes above), but for the alternation of male and female voices from movement to movement, for the uncanny spaciousness of the eight trombones (four on either side) in the Hostias and Agnus, the ethereal sparkle of five pairs of cymbals softly clashed simultaneously in the Sanctus, the four gleaming tubas rarely discerned in such a herd as during the Hosanna, and the seven drummers who end the work with their muttered timpani chords.

Ensemble is a thorny problem with such monstrous forces; it was not perfectly solved here of all places, but the degree of precision obtained was remarkable in the circumstances and an occasional flaw in unanimity went for nothing amid the vitality and refinement of the interpretation, and the beauty of sound elicited by an anonymous and excellent chorus, and by the Royal Philharmonic Orchestra. The technical difficulties of the tenor solo in the Sanctus were long since conquered by Mr. Richard Lewis, who makes of it just such a song of “tender beings angelical” as Gerontius heard in Heaven. It was a noble and beautiful performance; to have heard the Lacrymosa so performed was to understand why Sir Thomas Beecham cherishes Berlioz, and why we should cherish him too.

The Pristine Audio version of the 1959 Berlioz Requiem is a major addition to the Beecham discography. Highest recommendation

On December 13, 1959 at London’s Royal Albert Hall, Thomas Beecham conducted the Royal Philharmonic Orchestra and Chorus in a performance of the Berlioz Grande Messe des morts. In addition to being England’s pre-eminent conductor and a towering international presence, Beecham was long recognized as one of the finest Berlioz interpreters of his era. Beecham was 80 at the time of this performance, and had only 15 months to live. I don’t think there is any question that everyone present in Royal Albert Hall on December 13, 1959 (Beecham included), realized this was an event that would never be replicated. The result is a performance for the ages, one of the greatest and most affecting renditions of the Berlioz Requiem preserved on disc. The 1959 Beecham Berlioz Requiem has been reviewed three times in Fanfare. In the March/April 1984 issue (7:4), William Youngren reviewed a Cetra double LP issue. Youngren wrote: “I found myself as overwhelmed, by both music and performance, as ever … this is a set to be grateful for, one that should be in every collection, bar none.” Adrian Corleonis took a different point of view when appraising a CD release on the Hunt label (Nov/Dec 1988, 12:2): “Beecham’s brisk pace—saved from headlong precipitateness only by gentlemanly elegance—scants Berlioz’s grandeur with amazing dexterity.” But Corleonis had the opportunity to return to this Berlioz Requiem, courtesy of the BBC’s official release of the concert (Nov/Dec 1999, 23:2). The vast sonic improvement of the BBC issue over the Hunt led Corleonis to conclude: “Heard in more or less adequate sound, Beecham’s go at the Requiem leaves even the best of other recordings toiling in the rear.… Indispensably awesome.” I join my colleagues in their glowing assessment. This is a recording that commands attention from anyone who is interested in Berlioz, or the legacy of Thomas Beecham.

And now it is my turn to reappraise my feelings about the performance. Until now, I was familiar with the Beecham Berlioz Requiem courtesy of the previously mentioned official BBC issue. It is a fine example of a late-1950s radio broadcast, offering respectable dynamic range and impact, as well documenting the beautiful, rich sound Beecham was able to coax from his beloved Royal Philharmonic Orchestra and Chorus, as well as tenor Richard Lewis in the Sanctus. I have to confess that in listening to the BBC issue, my impression was that the Beecham interpretation, while the most beautiful I have ever heard, did not quite realize this epic work’s potential for electrifying impact. But a new Pristine Audio restoration erases any previously held reservations. Andrew Rose processed the BBC recording with Pristine Audio’s “XR remastering” and “ambient stereo.” I hear nothing artificial in Rose’s superb restoration. What I do hear is the version of this performance that, at long last, invokes the experience of hearing the music in the vast acoustic of Royal Albert Hall, but with absolutely no loss of detail. In fact, the voices and orchestra emerge here with even greater clarity. It would perhaps be stretching things just a bit to say the Pristine Audio restoration equals the best stereo recordings of the era (compare it, for example, with Beecham’s contemporaneous RCA recording of Eugene Goossens’s Cecil B. DeMille orchestration of Handel’s Messiah). But now, such moments as the climax of the Tuba mirum, the trombone interjections in the Hostias and concluding Agnus Dei, and the timpani in that final movement all have the hair-raising effect Berlioz and Beecham intended. It is a sonic restoration that can be enjoyed by any listener, even those not partial to historic recordings.

The inclusion of the announcer’s closing comments (not included on the BBC release) is a welcome addition. The CD insert includes a brief essay and track listings. No texts or translations, but they are of course readily available from other recordings, and via the internet. The Pristine Audio version of the 1959 Berlioz Requiem is a major addition to the Beecham discography. Highest recommendation.