Verdi’s penultimate opera, as Milton Cross notes in his introductory comments, requires three principals of the highest calibre. Drawn from Shakespeare’s play, and with the playwright’s complex characterisation underpinning the opera, Otello needs a tenor who is both heroic yet capable of tenderness, a soprano who is a paragon of virtue yet also strong when confronted with false accusations levelled against her, and a baritone whose inner monologue stands in complete contrast to his public face. On the stage the singers convey these emotions visually and vocally, but, as we can judge from this radio broadcast, the very best singers can do it by voice alone.

Mario Del Monaco was pre-eminent Otello in the world’s leading opera houses between the mid 1950s and the early 1960s. His bright and virile tone possesses just the right amount of heroism for the dramatic parts of the score, and the listener is quickly confident that he will deliver all the role’s show-stopping high notes with ease. Yet for a tenor with something of a reputation for a ‘stand and deliver’ style, he is evidently capable of scaling back his voice to suit the various moods of the role. The Act 1 love duet contains some very restrained singing as he blends his voice with our Desdemona, Victoria de los Angeles, and the anguish of the final moments of Act 4 are beautifully conveyed. Otello was one of Del Monaco’s favourite roles, he starred in many European productions and made two commercial recordings for Decca. At the Met he featured in three matinee broadcasts of the opera.

This broadcast is a very rare appearance as Desdemona for Spanish soprano Victoria de los Angeles. She sang the role only four times at the Met, being far more commonly heard as Mimì, Butterfly and Marguerite, and this is the only known broadcast of her in the role. Yet her liquid and creamy soprano is ideally suited to Desdemona, infusing the role with a touching sense of injured innocence. The heart of the role is the Ave Maria at the start of Act 4 and rarely has it been sung with more beauty of tone and tenderness.

Iago was one of Leonard Warren’s signature roles. He featured in no less than seven matinee broadcasts in the role between 1946 and 1958, as well as an opening night telecast in 1948. Iago cannot simply be a scheming villain, the singer has to also be a credible friend and confidant to Otello, and Warren is able to use his flexible instrument to great effect in the role. His whispering into Otello’s ear in Act 2 is a masterclass in intelligent singing. Warren was the Met’s leading baritone in Italian opera from his debut in 1939 to his sudden death on stage during a performance of La Forza del Destino in 1960.

Conductor Fausto Cleva was born in Italy but emigrated to the US as a young man. He joined the musical staff of the Metropolitan Opera in 1931 as chorus-master and répétiteur, and eventually graduated to become one of the house conductors in 1950. From then, until his death in 1971, he conducted almost one thousand Met performances, concentrating on Italian opera. Perhaps because of his long association with singers behind the scenes, Cleva is able to create just the right musical fabric with the orchestra (who play such an integral part in this opera) to give the singers the support they need.

Cover artwork based on a photograph of Mario Del Monaco as Otello
Live broadcast performance from the Metropolitan Opera House, New York, 8 March, 1958 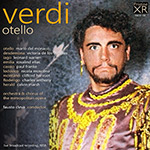 Review of Ronald Eyer in the March 1958 issue of Musical America
(Performance of 27 February 1958, not broadcast)

Revived after an absence of two seasons, Verdi's monumental Shakespearean drama received a galvanic performance thanks to a near-perfect roster of principals and one of the most resourceful conducting jobs of the season. Unlike much of Verdi, "Otello" is not an opera that will play itself regardless of who is singing. With a minimum of thrice-familiar arias, ensembles and other stock paraphernalia, it leans heavily upon the individual dramatic and vocal abilities of the main protagonists. It demands of the title part, of Iago and of Desdemona vivid, probing, full-dimensional characterizations - plus voices and a singing style of heroic proportions. These the Metropolitan happily was able to provide.

Mario Del Monaco has grown astonishingly in the role of the Moor. From the moment of his appallingly difficult "cold" entrance on the "Esultate!," with its high A, he is the alternatingly regal, brooding, tender, sickly jealous, ferocious Moor of Shakespeare's creation. And he has brought an added dignity to his performance -a restraint in the frenetic moments and a vocal refinement and nuance which are highly commendable.

Leonard Warren, too, as Iago, seemed to have improved upon what long has been one of his most sensitive, carefully detailed portraits. His vitriolic declamation of the "Credo" and the sinuous, reptilian mezza voce with which he enflames Otello over Cassio's dream were peaks in a performance sustained throughout at high altitudes. In her Desdemona, Victoria de los Angeles emphasized the qualities of sweetness, misinterpreted goodness of heart and religious piety which came naturally to their fullest fruition in the "Willow Song" and the "Ave Maria" of the last act, providing the opportunity for Miss de los Angeles' most beautiful singing of the evening. A bit more spirited conception would have been appropriate in the earlier acts.

Support of a high order was provided by Rosalind Elias as Emilia, Paul Franke as Cassio, and Nicola Moscona as Lodovico, as well as by Clifford Harvuot and Calvin Marsh in lesser roles. The chorus, the orchestra and Fausto Cleva at the conductor's desk shared equally with the soloists in the perfection of the performance. Mr. Cleva revealed an ultimate knowledge of the music coupled with a gratifying awareness of the special nature of the late Verdi music dramas (as distinguished from the earlier conventional operas) in such matters as continuity, the long line and the new significance of the orchestra in the over-all design and fabric of the work. The result was a "chef d'oeuvre."