This broadcast was the last time the radio audience heard Kirsten Flagstad and Lauritz Melchior sing together. While the Met’s faithful had several more chances to hear them together in the opera house before Flagstad’s departure for Europe on 19 April 1941 (their final performance together was in Die Walküre during a tour performance in Cleveland on 17 April 1941), none of those performances were broadcast, or otherwise preserved. This is therefore our last chance, as listeners, to hear the greatest cast ever assembled for this opera. With all due respect to the tenors who sang with Flagstad after the war, and to Helen Traubel, Melchior’s principal partner from late 1941 onwards, nothing has matched the partnership of Melchior and Flagstad as Wagner’s ill-fated Tristan and Isolde since 1941. There have been some great Isoldes (Astrid Varnay and Birgit Nilsson for example) and some worthy Tristans (such as Wolfgang Windgassen and Ramon Vinay), but the magic Melchior and Flagstad created was unprecedented and unequalled since.

Melchior and Flagstad sang this opera together no less than 86 times between 1935 and 1941, mainly at the Metropolitan Opera in New York, but also in London, San Francisco, Los Angeles, Boston and Chicago. This broadcast was their 81st performance together, and as such represents their most mature interpretations of the roles on stage. The pair of them offer us the type of Wagnerian singing that simply does not exist today. Not only are the voices immense, projecting with ease over the dense orchestration, they are immense together.

Since Melchior’s retirement from the Met in 1950 Isoldes have tended to dominate their Tristans. Not so with Melchior. His totally unique voice had a clarion trumpet-like ring to it and was just at ease in the low parts of the score as the high. In fact, the role of Tristan is among the lower parts for a tenor, the highest note being a top A. The problem is one of stamina. Like all of Wagner’s operas Tristan und Isolde is very long, more than four hours (in its uncut version) and would tax the abilities of any singer. The role of Tristan, while not as long as Siegfried, is one of the hardest of all because of the all-encompassing nature of the part. Tristan does remarkably little in Act 1, indeed Melchior often enjoyed a drink on stage while ensconced in the ship’s tent that dominated centre stage of the Met’s production. Act 2 has a lengthy duet with Isolde, about half an hour long in the cut version used by the Met. The tenor has to be able to match his soprano note for note, particularly at the start when the orchestra is at full tilt. The second half of the love duet requires more nuanced and sensitive singing, often piano, which can be difficult for a tenor used to singing loudly most of the time. But it is in Act 3 where the tenor really shines. He sings most of the act, alternating weak and feeble utterings with crazed outbursts littered with sustained top As. The tenor’s vocal technique has to be absolutely secure to nail each of those notes, any of which could easily crack.

Melchior sings the role of Tristan like none after him have been able to do. While he had a not entirely undeserved reputation for being occasionally careless about note values (and musical entries for that matter), what we get from him is singing and artistry of the highest quality. He has the notes, and he has them just as much at the end of Act 3 as in Act 1, seemingly oblivious to the huge vocal demands of the role. He simply never tires. But aside from the sheer strength and power of his voice, he also fully inhabits the role: suitably tender in the right places of the love duet, and with such a threadbare voice in the parts of Act 3 that when he suddenly unleashes the voice the contrast is immense. All told he sang the role of Tristan more than 200 times in his career, far more than any other tenor has managed, and he sang it for more than twenty years. The delight of this, and the other Met broadcasts, is that they preserve a truly great singer in one of his most famous roles, in an age before Wagnerian operas were being recorded complete. Flagstad would feature in the first complete commercial recording of Tristan und Isolde in 1952 (PACO 067), but by then Melchior had retired. Although he recorded the Act 2 Love Duet twice (with Frida Leider and again with Flagstad), and large sections of Act 3, he never appeared in a complete commercial recording.

Kirsten Flagstad’s Isolde is almost certainly better known than Melchior’s Tristan due to that commercial recording. She was a peerless Isolde between 1935 and 1941, and still had very few competitors on her return after the war (only Traubel, Varnay and Mödl come close). Like Melchior, Flagstad had a substantial vocal instrument, almost made for towering over a Wagnerian orchestra. She is perhaps at her best in Act 1, a perfect mix of sorrow and anger, and she often stated that she lost respect for the character after the drinking of the love potion at the end of the act, thinking she became too passive, and love-sick. Her personal feelings don’t impair her ability to give us a wonderfully tender Act 2 duet, including both top Cs, and a Liebestod filled with pathos.

The supporting cast is no less impressive. The role of Isolde’s confidant Brangäne is taken by Swedish mezzo-soprano Kerstin Thorborg. Thorborg sang at the Met between 1936 and 1950, mainly in Wagnerian role such as Venus, Fricka, Erda, Ortrud and Kundry, with occasional forays into wider repertoire as Octavian, Ulrica and Orfeo. Her solid, rich voice is an ideal counterpart to Flagstad in Act 1, and her warnings during Act 2 are hauntingly beautiful. American baritone Julius Huehn brings vocal intelligence and a warm tone to the role of Kurwenal. He really shines in Act 3 as he tends to the ailing Tristan. Huehn was heard on no less than twenty-two broadcasts between 1935 and 1944, mainly in Wagnerian roles such as Wolfram, Telramund, and Wotan in Die Walküre. King Marke doesn’t have much music to sing in the opera, but when an artist of the stature of Russian bass Alexander Kipnis is singing the role, the monologue in Act 2 becomes a thing of real majesty. A significant bonus for us is that Leinsdorf has restored the part of the monologue that was traditionally cut, and we hear the complete uncut version in this broadcast. Kipnis had a significant career in Europe before fleeing to the US on the outbreak of World War II. He sang more than a hundred performances at the Met between 1940 and 1946, but the broadcast audience only once heard his most famous characterisation, that of Boris Godunov.

Erich Leinsdorf had assumed control over the Met’s German wing following the death of Artur Bodanzky in 1939. The young man was not yet 30 when he conducted this broadcast of Tristan und Isolde and he undertook several (usually losing) battles with older, established, and much more experienced singers (including Melchior, Traubel, and Schorr) over conducting style and opening up the traditional cuts made to Wagnerian performances. Melchior never sang Act 2 of Tristan without cuts in the love duet, and the only person who could persuade him to restore traditional cuts to Act 3 was Thomas Beecham. Despite these issues, Leinsdorf is a highly capable conductor and the performance never flags.

Cover artwork based on a photograph of Flagstad & Melchior as Tristan & Isolde in 1935
Live broadcast from the Metropolitan Opera, New York City, 8 February, 1941 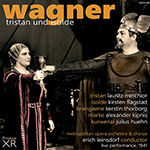 This recording hails from a previously unused source of unusually high quality, carefully preserved in acetate discs, the majority of which appear in almost mint condition. From a restorer's perspective they presented a "game of two halves" - the first half of the opera took a week of fine restoration work to bring it up to the required standard, and there remain some sections which are less than optimal due to the worn conditions of a couple of sides.

Thereafter things improved dramatically, and it was the work of less than a day to complete work on the second half of the second act and all of the third. Here we find exceptional sounds quality for any live operatic recording of the 1940s, and it from this the end of the opera that the lengthy sample can be heard.

The original source preserved much more radio announcement content, and I have chosen to cut entirely the dialogue between acts, and to edit down the preamble, some of the numerous curtain calls and a portion of non-relevant post-opera comment. The aim was to preserve the spirit of the event without leaving the listener yawning through promotional content of little or no interest.

And so this Tristan und Isolde joins our two other Leinsdorf/Flagstad/Melchior live performance recordings from the period - Die Walküre (1940, PACO125) and Tannhäuser (1941, PACO130) in offering, in astonishing audio quality, some of the finest Wagner ever performed and one of the greatest vocal pairings in history. Truly an unmissable addition to any serious operatic collection.