"This is perhaps the best all-round Meistersinger I have ever heard. The main reason is Hotter's Sachs, which I had never heard before and which is surely one of the greatest operatic characterizations ever put on record. In his book Ring Resounding, the story of how the pioneering Solti Ring was recorded, producer John Culshaw tells of Hotter's trying out, in the recording studio, different ways of singing phrases of Wotan's that he had been singing in public for decades. One can believe it. For this portrayal of Sachs could only have been arrived at by a man who constantly searched for understanding and left no possibility untried. Not only is Hotter musically splendid, in perfect control of his great voice; he is also alive to every nuance of every line in a way that is constantly illuminating yet never forced or overdone. Even Schorr pales by comparison."

We are doubly lucky with respect to this recording, possibly even more so. Firstly from a technical perspective, it is an unusually early example of tape recording - possibly the earliest Wagner opera to have been captured on the new medium - and it's one that's survived remarkably well. At some point a few years ago the tape was transferred to DAT tape, and it's a direct digital copy of that which was sent to me a while back and which was the source for this release. With it's steady pitch throughout, lack of awkward repetitive side changes, surface noise or any of the other regular shortcomings of 1940s disc technology, it's a wonderful starting point for a restoration.

Secondly to have any recording of Hans Hotter in one of his signature roles as Sachs is exceptionally rare. We are incredibly lucky that Bavarian Radio preserved this performance - unique in that it captures Hotter at his very peak, prior to his "vocal crisis" of 1950 which led to him greatly curtailing his appearances in the role. The only other recording of Hotter singing Sachs dates from 1956 Bayreuth appearance, and a performance he was so unhappy with he instructed that the master tapes be wiped - it survives only in an off-air recording.

This performance has naturally appeared before on various LP and CD releases. Those familiar with the last CD issue may be surprised to find the whole of the first act appearing on a single CD where previously it had had to be split across two discs. An analysis of the pitch of the original tape transfer we received indicated that it was running very slightly slow, with A=437Hz. The majority of German orchestras perform at the slightly pitch of 443Hz or 444Hz. By repitching this recording to the more likely A=443Hz that first movement fits onto a single disc - by some six seconds.

I have used XR remastering to produce as clear and, I hope, realistic a sound as possible. Some residual tape his may still be apparent - any further attempts to reduce this resulted in reduced top end clarity. As it is listeners should find a step change here in sound quality over all previous issues of this essential Meistersinger. 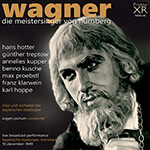 Hans Hotter was indisputably one of the finest Wagnerian bass-baritones of the twentieth century. His Wotan was unmatched by any, save perhaps Friedrich Schorr, and fortunately captured many times by live broadcasts. His Gurnemanz and Dutchman are also well represented by recordings, but one crucial role, that of Hans Sachs in Die Meistersinger von Nürnburg, is a real rarity.

Until 1950 Hotter had seemed able to overcome every career obstacle. Even the war, which inevitably disrupted musical life in Germany, allowed him to forge new partnerships with Richard Strauss among others. After the war this versatile baritone cemented his growing international reputation by joining the visit of the Vienna State Opera to London in 1947. But Hotter was 40 in 1949 and had, he later admitted, pushed himself by undertaking too many taxing Wagnerian roles too early in his career. In 1950 he suffered a vocal ‘crisis’, exacerbated by bad hay fever, that led him to be overlooked for the re-opening of the Bayreuth festival in 1951. After 1951 Hotter became more careful as to his choice of roles, and Sachs was one casualty. The sole exception to his new rule was a new production of Meistersinger mounted by Wieland Wagner at Bayreuth in 1956. Hotter was so unhappy with his performance that he asked Wieland to intervene with Bavarian Radio and have the master tape wiped. They complied, and thus, unlike most other Bayreuth performances from the 1950s, the only preservation of this is an off-air tape.

Fortunately Bavarian Radio did not destroy the master tape of the 1949 broadcast of Meistersinger from Munich. It preserves Hotter’s masterful interpretation of Hans Sachs in excellent sound, and before his vocal crisis. Everything that we know about Hotter as a supreme Wagnerian is on show here, the exquisite vocalism, the power to spare, and the subtle shading of the text. Hotter brings interpretive meaning to Sachs’ monologues that few other interpreters have managed. This same ability made him a successful lieder singer throughout his career.

If Hotter is the star of this performance, the rest of the cast is far from being poor and showcases the depth of operatic talent available in provincial German opera houses after the war. Günther Treptow sings Walther von Stolzing. Treptow was best known for his assumption of the heavier Wagnerian roles (including Siegfried and Tristan), and was one of a number of such heldentenors in Germany between 1930 and 1950. Walther is one of the higher Wagnerian roles for tenor, so much so that Lauritz Melchior declined to sing it on stage. Treptow manages the tessitura relatively easily, with impressive stamina, though his voice is perhaps not as lyrical as one might like.

Soprano Annelies Kupper sings Eva. Kupper sang widely in Germany throughout the 1930s and 1940s, gaining a reputation in lighter Wagnerian roles. However it was in Richard Strauss’s operas that she perhaps became best known. She sang the title role in the premiere of Die Liebe Der Danaë in Vienna in 1952 after being promised the part by Strauss himself before his death. Her pure voice is particularly well suited to the role of Eva.

Beckmesser became Benno Kusche’s signature role. His career started before the war but was interrupted by active service (where he was wounded). He returned to the stage, concentrating on German buffo characters, which were comedic without ever becoming silly caricatures. He recorded the role of Beckmesser for EMI under Kempe in 1956.

Conductor Eugen Jochum was based in Hamburg between 1934 and 1949 as musical director of both the local Hamburg State Opera and Hamburg Philharmonic. In 1949 he moved to Munich to take charge of the new Bavarian Radio Symphony Orchestra, a post he was to occupy until 1961. Jochum recorded throughout his career, including a 1976 studio recording for DG of Meistersinger with Dietrich Fischer-Dieskau and Plácido Domingo. This live radio performance of the opera captures him in the moment, allowing us to hear his conception of the opera as a whole.