"A work of indisputable beauty and dramatic validity, outstandingly well conducted by Meredith Davies" - The Spectator, 1962

This live broadcast was transmitted from the Sadler's Wells Theatre in London on the BBC's Third Programme on the evening of Tuesday 10th April, 1962, and preserved excellently from the FM broadcast on open-reel tapes from which this release was drawn. This marks only the sixth full recording of the opera to be issued, though of course The Walk to the Paradise Garden is a highly popular orchestral piece, drawn from the opera's penultimate act.

The tapes were in excellent condition. There was some intrusive electrical hum, which was easily removed, and two very short patches were required to cover tape turns. Sound quality from the original BBC transmission was exemplary, with a generally very quiet audience. Alas this was broadcast just five months before the start of experimental stereo broadcasts by the BBC, though the application here of our Ambient Stereo processing does go some way to giving a little breathing space around the mono sound image.

Due to the opera's short length when spanned across two CDs I've added a rare bonus recording of Sir Thomas Beecham conducting the "Blue Network Symphony Orchestra", an ensemble of top rank New York orchestral players assembled for four radio concerts Beecham gave on the nascent ABC radio network in the spring of 1945. His performance of The Walk to the Paradise Garden formed part of the concert broadcast on 7 April 1945, which can be heard in full on PASC461. 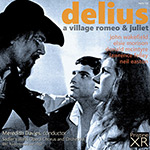 Towards the end of last year, when reviewing the reissue of Mackerras’s recording of this opera, I mentioned in passing a pirated set of LPs conducted by Meredith Davies deriving from a live performance at the Alhambra Theatre in Bradford. At first glance I assumed that this new set from Pristine was a straightforward transfer of that recording to CD; but, although the performing forces are identical with those IGS discs, they are heard here in a BBC broadcast relay from Sadler’s Wells’s own theatre in London. I have never heard the IGS set, but in his review of the LPs in Volume Three of Opera on Record John Steane remarks that the “audience seems to pick on all the quietest, loveliest passages for their coughing spasms.” That problem is less in evidence here, although the close of The walk to the Paradise Garden and the very final bar of the opera are both disturbed by bronchial contributions from the public, who are however considerate in reserving their applause until the music has actually ceased and are generally inoffensively quiet elsewhere. The broadcast sound too is clean and well-balanced, unlike the Alhambra recording which was described by Steane as “restricted in spaciousness and clarity”. Indeed, apart from occasional moments of overloading and some evidence of rapid and panic-stricken adjustment of the volume control, the sound is very good mono of its period. Nor does the live performance suffer from any of the orchestral slips one might expect in such a densely woven score, with only a couple of minor fluffs from the horns and some overly rebarbative low woodwind to cause any concern.

And the casting here is very good, too. In his review John Steane comments that “its lovers are truly suited to their roles” and commends both Elsie Morison and John Wakefield as the best exponents of them on disc (he was writing before the appearance of the Mackerras set with Helen Field and Arthur Davies). I still have a particular liking for Elisabeth Harwood on the later commercial EMI set conducted by Meredith Davies – nobody else can quite approach the sense of calm stillness that she achieves at the beginning of Scene Four – but like Arthur Davies, John Wakefield is young and eager as Sali in a way that eludes Robert Tear on EMI. John Steane was fairly rude about Neil Easton as the Dark Fiddler, describing him as having “some character but not really enough voice”; what struck me was a lack of substance in the lower register but a ringing top which compensated to a considerable degree, but I have to admit that either John Shirley-Quirk (on the later Davies set) or Thomas Hampson (for Mackerras) have more sense of presence in the enigmatic role. Steane also described the Marti (incorrectly identified as Manz) of the young Donald McIntyre (long before his days as Wotan) as “excessively rough-sounding”; but I welcomed his solidity of tone is a role that is after all pretty unpleasant.

In my previous review I commented that the later Davies recording on EMI employed a revised version of the libretto by Tom Hammond which I assumed had been commissioned for that performance; but here ten years earlier we are given the same revisions, which do much to overcome the unidiomatic translation originally provided by Delius’s wife Jelka Rosen. When reviewing the EMI set for the Gramophone, Deryck Cooke had complained about alterations of the rhythms to accommodate this revised text, commenting in particular on Harwood’s delivery of the line “what that woman said is true”; here Elsie Morison gives us the same line with the exact rhythm of Delius’s score, which may sound slightly less natural as a setting of the words but which preserves the sense of solemnity which Cooke missed with Harwood. Indeed, the precision of the singing throughout, with the exception of the rather blowsy chorus, is exceptional and for much of the time there is no need to have recourse to a printed text (which is just as well, since none is provided).

In my review of the Mackerras set I lamented the rather prosaic treatment of the closing scene with the bargemen on the river, where his Austrian singers lacked the sort of magic that would convincingly enable Vreli to confuse their voices with those of angels. On his EMI studio set Davies scored strongly with the voices of such singers as John Noble and Ian Partridge as well as a real sense of enchantment; and miraculously he manages to achieve the same effect here with much less well-known singers. Elsewhere he has a tendency to be somewhat brisk with Delius’s writing (notably in the dream sequence of Scene Four), no doubt with dramatic considerations in mind, and it has to be admitted that the decidedly boxy acoustic of the old Sadler’s Wells theatre cannot begin to compete with the studio sound provided for Davies by EMI, or for Mackerras by Argo. Nevertheless, for those who love this score as much as I do, there is a real sense of magic in this performance which is most attractive; and for those who already own either of the studio sets, this might well be regarded as a valuable adjunct. As I mentioned last year, the later Davies recording remains unavailable separately; so for those wanting the complete opera by itself in a modern recording, choice is restricted to Mackerras (now on a mid-price Decca reissue available from Presto Classical).

The second disc concludes with a 1945 recording of the interlude The walk to the Paradise Garden conducted with an American orchestra by Beecham, but this is not really competitive with either of Beecham’s recordings of the complete opera with the BBC Symphony Orchestra or the Royal Philharmonic, and some of Beecham’s adjustments of the tempo sound excessive by modern standards (although I have no doubt that Delius, always willing to accept Beecham’s adjustments of his scores, would have approved). The recording has been well served by its remastering, but the dynamic range has been severely restricted even by comparison with the theatre performance earlier on this same disc. Tracking on the discs is limited to individual scenes, with separate cues provided only for the dream sequence and the Paradise Garden interlude.

In conclusion may I once again put in a plea for someone to reissue the BBC tapes of the early Delius operas Irmelin, The magic fountain and Margot le rouge, once available on Artium CDs but long since deleted? Amazon currently lists sets of the latter two at prices ranging from £48.74 upwards, with two copies of Irmelin quoted at a whopping £175.00 and £196.00. Who on earth would be willing to pay such sums, no matter how desirable the issues?