"That one recording should continue to hold sway over many other attractive comers after so long is simply a tribute to Callas, Gobbi, Serafin and Walter Legge" - Gramophone, 2015

Between the summer of 1954 and September 1955, the legendary EMI producer Walter Legge recorded no less than six full operas at La Scala, Milan, with Maria Callas in a leading role. Rigoletto was the sixth of these. It is almost impossible to imagine such a productive work-rate today, and yet this amazingly productive period, with Callas at the height of her powers, produced some of the defining recordings of the operatic canon - not least the present offering. The recording team were by now exceptionally familiar with the venue, and in an era of mono recording where the primary concern was capturing the voices and balancing them against the instruments, rather than the stereo presentation of a staged drama that would soon follow, it was no doubt easier to make these recordings than it would later become.

Nevertheless, it took 13 days to record Rigoletto, and in this restoration I've encountered minor differences in recordings made on different days - slightly intrusive traffic noise here, peak distortion there - which I've hopefully dealt with to the listener's satisfaction.Some minor pitch discrepancies have been ironed out. But the main contribution here has been to open out the sound and lift something of a veil from the performance, with Ambient Stereo XR remastering bringing a greater sense of life, clarity and immediacy to the proceedings throughout. Can it really be 60 years since this recording was first released? 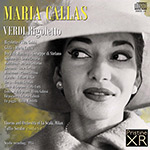 “Once heard, this rendering is never likely to be forgotten,” is the still the judgment of the majority of music critics, and there is no need to change this verdict yet. Here in this freshly minted transfer, the reasons are if anything even clearer why this Rigoletto remains the standard by which all others must follow. That said, despite what used to be called the standard theatrical cuts and sound which—although much clearer than before—is still 60 years old and not even genuine stereo, the younger amongst you might still say, “Well, why choose this version when Milnes, Cappuccilli, Domingo, and Pavarotti are all out there?”

The reasons are immediately obvious: Serafin, Callas, and Gobbi. Serafin paces like he has done it all his life, which of course he had—from the gentle accompaniment of “Piangi, piangi” to the quickening roar of “Si, vendetta.” All is right and proper. Next is Tito Gobbi in the title role. Just listen to the contrast in the repetitions of “La ra la ra” and then to follow the sadness and desperation in “Dove l’avran nascosta?” (Where has she been hidden?) With plenty of vibrato when he finally admits the courtiers have kidnapped his daughter—the frustration, the regret—it’s all there. The violent beginning of “Cortigiani” and the pleading second half of the aria all beautifully acted with the voice. One can “see” the emotion from one of the really great singers of the 20th century—a golden voice indeed. There are so many touches of individuality in this performance. “Un vindice avrai” is sung with an open and angry tone and you can see the eyes glaring and the angry expression before coming down to the “Si, vendetta.” This is tremendous. To adapt Callas expert John Ardoin’s view—Gobbi and Callas draw strength from the text and do so with such model diction that “we all but taste Piave’s words.”

Rigoletto was recorded in 1955, during which Callas was at her absolute peak. She sings delicately throughout, honing down the voice to great effect in “Caro nome.” Her duets with Gobbi are just magical and “Tutte le feste” blends in. The tenderness she exhibits in the whole of the last scene with her father beginning “V’ho ingannato” and for example the slight extension of “O mio padre” is acting with the voice of the highest caliber. Is there another soprano who characterizes like this?

There is a but, and that but is Di Stefano. By 1955, although he was still in fine voice, his singing had become more open and “Questa o quella” is charmless—try Gigli in 1938, live from Covent Garden. “La donna e mobile” has a lovely diminuendo in the middle but is hardly a classy piece of singing, despite the face and presence he undoubtedly supplies in abundance throughout.

This transfer, an ambient stereo transfer from Pristine, opens up the orchestra successfully. The brass in the Overture shine out as they have not done before, lifting the tension; however, there is still some inherent distortion in the recording. This package is on two CDs with an attractive picture of Callas on the cover. There is no libretto. For two towering vocal figures from the last century and a conductor who knew everything about pacing, this set is still the top choice even if you buy another more modern edition.