“This is, particularly when heard in this transfer, a great operatic experience in the grand tradition" - Fanfare

The source recordings for this magnificent live performance of Giordano's Andrea Chénier were well preserved tapes of the live radio broadcast of 4 December, 1954. It was the first time the Met broadcast this opera, and they have three of the best soloists. Zinka Milanov is just assuming a role that she would keep until her retirement, and it’s generally quite kind to the soprano; Mario Del Monaco in the title role has all the swagger and gleaming top notes that these verismo operas need; Leonard Warren is an excellent Gerard.

Light editing and fading of applause and incomplete commentaries suggest a high quality dub of an excellent original FM tape recording. If the sound of the original was at times a little coarse and thin, this has been much improved in this XR remastering, which has revealed a depth and warmth hitherto lacking, as well as taming some harsh upper frequencies. I've also been able to reduce and eliminate some quite prominent wow and flutter heard on the source tapes.

Orchestra and Chorus of the Metropolitan Opera
Fausto Cleva, conductor 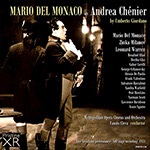 He absolutely knows how the music should go, and he shapes it with knowledge and brings a real conviction to the score

To those of us for whom Andrea Chénier has always been a guilty pleasure, this recording has had a serious attraction. Surely the finest studio recording is Decca’s effort with del Monaco, Tebaldi, Bastianini, and the brilliant conducting of Gavazzeni. And its most serious competition in the live-performance arena is the Orfeo Vienna Staatsoper performance with Corelli, Tebaldi, Bastianini, and equally brilliant conducting of Lovro von Matačić. If you love this tune-filled, thrilling (if not particularly subtle) opera, both of those are essential.

But that should not cause those who really love this opera to ignore this version. It has been issued before, including by the Met itself on expensively priced LPs, as well as on the MRF and Nuovo Era labels. Pristine’s sound, featuring its unique XR remastering, leaves the others well behind. The performance gains new life in terms of richness of color in both the voices and orchestra, steadiness of pitching, removal of flutter, and removal of extraneous noises from the audience or stage where possible.

If Otello was del Monaco’s favorite role, Chénier must not have been far behind. It might have been written with his voice in mind. The received wisdom on del Monaco is that he sang brilliantly but without nuance; and as with much received wisdom, it is not completely true. Yes the voice had a unique brilliance—if you want to define “squillo” to someone who doesn’t know the term, just play a del Monaco high note. But in fact he could and did sing with sensitivity. Listen to his gentle entry at “Ora soave” in the second act duet with Milanov. He had a firm legato, and in 1954 was in his absolute prime. The opening of “Come un bel dì di Maggio” is, for instance, quite lovely. The voice took on a touch of hardness by the time of his studio recording, and as good as that is, this is better. The presence of an audience, the reality of a staged performance, gave the tenor the freedom (or inspiration) to take some risks, hold some notes, add a bit of frisson. If you object to that, the chances are that you don’t care for this opera—because that kind of interpretive liberty is the essence of this style. What we have here, in my view, is one of the great dramatic tenor performances captured on disc from the middle 20th century.

Milanov also had the right voice for this music, though without the tonal plushness that we grew accustomed to with Tebaldi in the role. She also has occasional trouble on top, particularly at the climax of her aria. But she also produces some gloriously beautiful phrasing, particularly in the two duets with del Monaco, and it is a pleasure to have this souvenir in a role that was important to her in the final decade of her career. She was a soprano in the grand manner, and this is vocal writing in the grand manner. If I had to guess, I would place the responsibility on Milanov for the transposition of the end of the final duet down to B♭. Frankly, I don’t mind—it thrills anyhow.

Ettore Bastianini was very closely identified with the role of Carlo Gérard. In addition to appearing on the Decca studio recording and the classic Vienna State Opera performance noted above, he is featured in a variety of other live-performance recordings as well, including another Corelli performance and a Tucker one. But in 1954 the Met unleashed its biggest voiced dramatic baritone on the role, and Leonard Warren actually has one of his real triumphs here. The big, rich, ringing tone is overwhelming, and he sings with characterization and incisiveness as well. The ovation after his aria is well deserved (and Pristine has tastefully shortened it).

There is luxury casting throughout as well. The wonderful Sandra Warfield movingly sends her son off to the revolution, and Met standbys such as Salvatore Baccaloni (Mathieu), Frank Valentino (Roucher), Alessio de Paolis (L’Incredible), and George Cehanovsky (Fléville) fill out a superb cast.

At the center is Fausto Cleva, the Met’s regular caretaker of the Italian wing in the 1950s. He absolutely knows how the music should go, and he shapes it with knowledge and brings a real conviction to the score. There is perhaps a bit more imagination and flexibility from Matačić and Gavazzeni, but this is in no way routine work. This is, particularly when heard in this transfer, a great operatic experience in the grand tradition.