Although in many ways a well-made recording for 1956, Horenstein's Mozart choral works suffered from rather inept handling of stereo, a recording technology that was still in its commercial infancy and experimental stage. This resulted in a recording that failed to cohere between two unusually separate left and right tracks, something which may have contributed to their lukewarm reception when first issued.

This XR remastering has not only addressed the usual issues of tonal balance, but has also sought to rectify the sonic image of the recording, bringing the two channels together in such a way as to eliminate the large "hole in the middle", whilst retaining an impressive stereo spread across the sound stage. The sonic picture has been further enhanced by a "relocation" of the rather dry original in the acoustic space of York Minster, a large Gothic cathedral in the north of England with a particularly fine acoustic, after much experimentation and consultation with Misha Horenstein, as well as consideration of the intended performance spaces of these ecclesiastical works by Mozart.

The results are a revelation. Occasionally my remastering work has led to comprehensive re-evaluations of performances and recordings, and I suspect this will be one such case. With all of the musicians and singers working together within a credible sonic space and across a believable and beautiful sound stage, the whole performance seems to come alive, demonstrating just how marvellous it was all along, but for the rather ham-fisted efforts of those Vox engineers back in 1956, struggling to make stereo work for the first time. 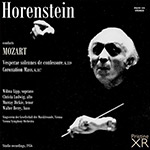 Jascha Horenstein developed his lifelong enthusiasm for vocal and choral music during his student days at Berlin's Hochschule für Musik, where for three years he served as an assistant to Siegfried Ochs, head of the school's choral department and founder and long-time director of the Berlin Philharmonic Choir.  It was during choir rehearsals for Ochs at the Hochschule for a performance of Bach's B Minor Mass in November 1921 that Horenstein was first noticed by Furtwängler, who encouraged him to pursue a conducting career, while Ochs himself described his assistant as “ one of the few conductors who really understood something about vocal music”.  According to Berthold Goldschmidt, a fellow student at the Hochschule, “it was from Ochs, the  collaborator of Nikisch and Mahler, that Horenstein learned the important technique of approaching the large scale developing traits of a composition from a psychological perspective.”[1]

Horenstein's first regular conducting experience also started during his student years when, in May 1922, he succeeded Hermann Scherchen as conductor of two large choruses in Berlin, the Schubertchor and the Gemischtechor Gross-Berlin, positions he held for six years. Goldschmidt recalled the occasion in his memoirs:

[Horenstein] soon left our master class for composition and Schreker’s seminar, in order to occupy himself with the more practical side of music making. He founded a choir of factory workers, with which he gave astonishingly good and lively concerts. These concerts were mostly without instrumental accompaniment, and included difficult works by Bartók and Schoenberg. The a capella choir and its radical conductor soon obtained a remarkable reputation.

Horenstein was a difficult taskmaster. Membership in the choirs involved participation in a comprehensive concert and educational program that included weekly lessons in solfeggio, sight-reading and voice training, as well as courses on the history and sociology of music. At some point into his stewardship he instituted the regular keeping of attendance lists, excluding people from the choirs for absenteeism or undisciplined behavior, conduct that always tried his patience, which caused a certain amount of friction and member turnover. Horenstein’s programs were also a subject of contention. One choir member complained that the choral works of Bartók and the Finnish composer Selim Palmgren, which were performed regularly, were too difficult and wrote that “many singers were of the opinion that the conductor made almost unachievable demands.” In some instances these included Horenstein's insistence that the choirs learn and perform difficult pieces by heart. Despite or because of this, during the Weimar years his choral concerts attracted much favorable attention from Berlin's most important critics, which led to engagements with orchestras and eventually to his appointment at the Düsseldorf Opera in September 1928, the start of a five year period of intense activity with singers and choruses.

After leaving Germany in 1933 Horenstein had much less contact with choral music but always relished the chance to include it in concerts when opportunities came his way. In 1953 he wrote to Karol Rathaus that he “enjoyed immensely” working with the chorus for a performance of Boris Godunov in Italy and that “there is simply nothing so wonderful in interpretation like working with voices”. He later described the human voice as “the most musically expressive instrument there is”, and whenever he included choral music in his concerts he invariably insisted on taking separate choir rehearsals himself, sometimes against the wishes of the chorus masters concerned. Indeed, some of his most successful performances, from Beethoven's Missa Solemnis to the Brahms Requiem to Mahler's Eighth Symphony, involved extensive work with choirs and soloists and the same can be said for the two Mozart items presented here, possibly Horenstein's first stereo recordings, in which the celebrated Viennese chorus and soloists give him their most refined, stylish and rhythmically vital singing, with phrasing of unusual attention and delicacy.

Many of us may remember these as rather thin-sounding monaural Vox releases. In fact the recordings were actually made in stereo in the Konzerthaus in Vienna in 1956, and Andrew Rose’s Pristine label has done his usual superb restoration work and given them a completely new life. This hardly sounds like the same performances as heard on my Vox LPs.

Horenstein’s Mozart is certainly not of the HIP variety favored by many today, but neither is it the soft-grained romantic view of some of his contemporaries. This is lean, tautly phrased Mozart with an extremely strong rhythmic pulse underlying everything. The result is music-making that is propulsive and deeply involving. While the performances lack the lightness of texture that early music specialists give it, at no point do Horenstein’s richer sonorities turn leaden, nor do they impede the music’s momentum.

Horenstein as a conductor always paid particularly keen attention to balance and texture, and he does so here both in the choral and the orchestral forces. The great Vienna Singverein Chorus sings here with a wonderful combination of tonal richness and clarity. The diction of its members is pointed and clear, their intonation is impeccable, and the quality of the sound they produce is consistently beautiful and never forced.

Horenstein’s soloists represent a who’s who of Mozart singing in the middle of the 20th century. Wilma Lipp’s soprano solos are glowing, and all four voices blend perfectly with each other. The Vienna Symphony may not have quite the tonal palette available to the Vienna Philharmonic, with a string sound just a tad less warm than the VPO’s, but it still plays very well and with a palpable sense of involvement not always present in either Viennese orchestra.

There are many wonderful recordings of both pieces, particularly the Mass. There are performance styles to please a wide range of tastes, from conductors as varied as Pinnock, Harnoncourt, Barenboim, Perahia, Karajan, and Koopman. Many of them couple these two works together, and some add additional music. As Fanfare readers know, when it comes to great music with many recorded performances, I tend to avoid the game of trying to rank them. Music is too complicated, and too personal, to say something such as, “Horenstein is in third place, between Koopman and Perahia.” There are a number of valid ways to perform this music, and to hear it. That is what makes it great. What I can say is that the tensile strength and momentum given to the music by Horenstein, coupled with his strong instinct for choral and orchestral balances and his ability to make music with an innately natural beauty and flow, work together to make this extraordinarily satisfying listening. And if you did enjoy it in its Vox incarnation, you absolutely must hear it in Pristine’s incredible remastering, heard here in natural stereo sound. A recording I always thought of as thin and congested has been opened up to an astonishing degree.