"Sutherland's charisma is palpable. Her voice -- clear, agile, powerful, and supernaturally brilliant -- is made for the part, and she sings with fluency that makes you forget all about technique and concentrate on the incandescent beauty of her voice."

This Magic Flute is a very special recording. Taken from a live BBC broadcast from Covent Garden Opera House in January 1962, it is the only known recording of the great Joan Sutherland singing the role of The Queen of the Night - with the added bonus of a remarkable cast and conductor alongside her, including of course Hans Hotter, Richard Lewis, Geraint Evans and Joan Carlyle. Although copies of the broadcast have circulated amongst collectors over the years, it was thought that the length of Act Two had led to the ending being lost, hence an incomplete release in poor sound on another label a few years ago.

The present transfer proves otherwise: taken from a tape in the collection of Mark Hood and believed originally prepared for or by one of the performers, it is indeed complete, and includes the BBC Third Programme announcements at start and finish. There are a couple of brief sections where the quality drops, believed to be patches to cover tape changes; other, shorter drop-outs, to be expected in an older tape recording such as this, have been successfully restored. XR remastering has added depth and body to well-recorded FM broadcast sound, whilst bringing out greater levels of clarity in diction and in the upper treble response; Ambient Stereo processing lends a sense of space and dimension to the original mono.

Given the duration of the complete performance - too long for two CDs - I opted to add Klemperer's 1954 mono Jupiter Symphony, which EMI seems to have abandoned in favour of its stereo remake. XR's 32-bit remastering system has worked similar wonders on the sound here too. 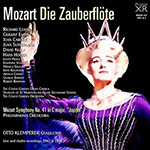 His triumph is his overarching view of the work that enables it to cohere at a higher level. This is masterly conducting

Pristine has done it again with a treasurable release. Notable perhaps most obviously for Joan Sutherland’s assumption of the role of Queen of the Night, and with Hans Hotter as Speaker, this is the first complete release of this performance (there has been a previous compact disc release on Melodram, but the second act was not complete: Pristine has been successful in tracing a tape that allows the work to resound as a whole). The cream on the pudding is the announcer’s impeccable, clipped BBC Third Programme (sic) accent (just listen to the way he says “flute”). Given Klemperer’s speeds, the work bleeds over to three discs, so as a bonus Pristine gives us Klemperer’s 1954 mono “Jupiter.”

Klemperer’s approach to Zauberflöte is indeed grand, and in this transfer the opening chords of the Overture convey all the solemn splendor of a Masonic Temple and its environs. This broad element really comes into its own as Tamino is rejected from Sarastro’s temple. Another trait of this performance is a balancing affection: heard firstly perhaps in the string phrasing immediately preceding the Overture’s Allegro, and most obviously in the opening to act II. Yet the power of the tuttis of the Overture leaves on in no doubt as to Klemperer’s serious intent. And all that’s not to imply there is no humor here, either. His triumph, though, is his overarching view of the work that enables it to cohere at a higher level. This is masterly conducting.

Richard Lewis as Tamino has not had the best critical reception, perhaps, but he has a fine dramatic grasp while capable of lyricism (“Dies Bildnis is bezaubernd schön”). There is a trace of strain there on occasion, but this remains a solid reading. No one, surely, can heckle Geraint Evans’s birdcatcher, lusty and full of life (even if Klemperer’s tread in “Der Vogelfänger bin ich ja” seems to sap him of a little vim). Evans is perfectly modulated of voice also in his contributions to “Bei Männern” against Joan Carlyle’s beautifully light-voiced, almost boyish at times, Pamina. Carlyle’s act II “Ach, ich fühl’s” is full of heartbreak.

But who even now does not have a little frisson when one hears the words “Sie kommt!” and we realize that she who approaches is none other than Joan Sutherland, about to embark upon “O zittre nicht”? And she does not disappoint. Her voice is full, and she certainly evinces a fearsome aspect for poor Tamino. There are some moments when it is clear this is a live performance, and they would surely have been tidied up in the studio, but Sutherland herself is as clear as a bell and vocally beautifully nimble. Similarly in act II, her “Der Hölle Rache”, while not the cleanest, certainly has all the requisite force.

Hans Hotter’s Speaker is as impeccable as one has come to expect from this singer and he remains a joy to hear on vocal timbre terms alone. He brings a wisdom to the words, though, that works on levels far greater than sheer beauty of sound. David Kelly, in place of an indisposed Desző Ernster, takes the role of Sarastro. His “O Isis und Osiris” is not the steadiest, for sure, but he does at least have the breath control to sustain the long phrases (especially long at Klemperer’s pace). His “In diesen heil’gen Hallen” has more confidence. As Monostatos, Robert Bowman is nicely nimble in “Alles fühlt der Liebe Freuden.”

Of the smaller roles, the Three Ladies are a well-balanced trio, while the Armored Men sing their cantus firmus resolutely. In fact despite the star names in the cast, one should make mention of the fact that ensembles are consistently fresh and beautifully balanced. All praise, also, to the members of the Covent Garden Opera Chorus, who in their offstage contributions seem to carry a world of knowledge and who in the final celebrational moments of act I shine.

Pristine Classical itself admits to the occasional fluctuations in sound quality, but they are all relatively minor in comparison with the privilege we now have of experiencing this performance complete. Unfortunately some of them do occur in the delightful “Ein Mädchen oder Weibchen.” That is not enough to contradict the statement that Andrew Rose’s remastering is a work of art in itself. And just as this Zauberflöte is an indispensable supplement to Kemperer’s famous studio recording, so his Columbia mono Mozart “Jupiter” is to his stereo. The transfer here is from Columbia 33 CX 1257. Listen straight on from the opera, and the immediacy of the sound is remarkable (the venue was Kingsway Hall). Detail, too, is stunningly relayed. The gritty resolution of the first movement development is to be expected from this source, perhaps, and seems entirely in keeping with Klemperer’s monumental reading. High violins are always impeccably together here, wind always characterful. Stepping back in time like this reminds one that, while musicologically speaking we have learned much, maybe we have lost some of that sense of character and, indeed, communicative ability. Unsurprisingly the Adagio cantabile is properly Adagio (almost in a Mahlerian sense, given the breadth of utterance here), yet the feel of Mozart’s genius remains undimmed. Yet the Menuetto is closer to a Beethovenian scherzo (and how those lauded Philharmonia winds shine) and the finale has an energy and inner momentum that seems more appropriate to a live performance than a studio one. There is a reason performances like this survive the trials and travails of time, and Pristine’s offering reminds us why.