This recording was restored from a set of very high quality acetate dubs supplied to me by a donor who prefers to remain anonymous. The sound quality of these is unprecendented and gave me a huge head start in preparing this release. For extended sections I was lucky enough to have two different copies to choose from with different degrees of wear - each side lasted roughly a quarter of an hour. Wear and tear was uneven across the entire concert, with lengthy sections of the broadcast immaculate, but elsewhere surface noise clearly in evidence and requiring extensive restoration work.

I have preserved the concert exactly as broadcast save for two cuts: the long interval talk by short-wave radio has been faded out at the start then back in at the end, and the look-ahead in Ben Grauer's closing announcement has been cut. Elsewhere you'll hear evidence of a lack of communication between Grauer and Toscanini as the music cuts across two of the announcements. I've also retained the newsroom announcement of the end of Mussolini's reign over Italy as broadcast.

These are, however, mere historical details. What's most important is of course the music, which has been superbly preserved here. I've given the notoriously dry 8H sound just the slightest acoustic softening, retaining the directness Toscanini desired whilst just slightly rounding out the voices and orchestral tone with the merest hint of Sydney Opera House convolution reverb, an acoustic which seemed most sympathetic to the performances. 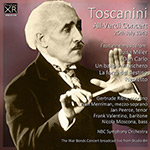 A Moment In History

It was during this broadcast that Mussolini’s downfall was announced. Harvey Sachs has described what occurred in the studio:

Toscanini and soprano Gertrude Ribla had just left the stage when an announcement was broadcast into the hall and over the air: Benito Mussolini had been deposed. Toscanini, beside himself, rushed back on the stage, clasped his hands and gazed heavenwards, in a sign of thanksgiving, while the audience, equally beside itself, applauded, cheered, screamed, and all but tore the studio to pieces.

None of this bedlam could have been apparent to those listening on the radio. Two announcements of Mussolini’s deposition went over the air, the first in an intermission talk carried by shortwave from the Pacific given by Admiral Harold R. Stark. It was probably during this talk that the audience erupted. After Stark concluded, the broadcast switched to the NBC newsroom, where a “roundup of the important events of the day from Italy” was given that included a second announcement of the deposition. When Ben Grauer then returned to introduce Act III of Rigoletto, no audience reaction was evident.

This, one of the greatest of all Toscanini concerts, is finally presented here in outstanding quality sound. It has been floating around on various pirate issues for years, but almost always in dry, boxy, cramped sound. (You can hear a typical example of what it sounded like previously at youtube.com/watch?v=F5qQ2OAYi34.) In the brief liner notes, Andrew Rose states that he was able to restore this concert “from a set of very high quality acetate dubs supplied to me by a donor who prefers to remain anonymous,” to which he gave “the notoriously dry 8H sound just the slightest bit of acoustic softening, retaining the directness Toscanini desired whilst just slightly rounding out the voices and orchestra tone with the merest hint of Sydney Opera House convolution reverb.” Thus those of you who are Toscanini Purists, and only wish to hear his recordings in their dead, cramped, airless original acoustic, are forewarned.

What makes this concert so wonderful to me is that it is not conducted in the taut, relatively uninflected style which came to characterize so many (but not all) Toscanini performances of the period 1943–47. On the contrary, it is much closer in style and feeling to his New York Philharmonic performances of the early-to-middle 1930s, which even such notorious Toscanini haters as Joseph Horowitz deem fit to rave about. Toscanini’s phrasing in “O don fatale,” “Eri tu” and “Pace, pace mio Dio” is expansive and elastic, surprisingly so when one considers how tense he was over the events of the war. (This was the broadcast during which Mussolini’s downfall was announced, prompting Toscanini’s clutching his hands and looking heavenward while the NBC audience erupted in applause, but this came after he had already performed the Luisa Miller Overture and the various arias, and those were also relaxed and expansive performances.)

Attention is drawn in this concert to soprano Gertrude Ribla (birth name Ribler, 1914–1980), of whom this is one of only two recordings known to me. (The other is a complete RCA Victor studio recording of Raffaello de Banfield’s obscure opera Lord Byron’s Love Letter, in 1958.) This concert, which is the only example of her singing I’ve heard, reveals her to have been a remarkably fine vocalist and a fascinating interpreter. The voice is bright but also powerful, able to ascend the scale to high Cs without apparent effort, and just youthful enough to make her a much more appropriate-sounding Gilda than Zinka Milanov, whom Toscanini used a year later in the much more famous reprise of Rigoletto act III at his famous Madison Square Garden concert using both the NBC Symphony and New York Philharmonic. Comparing the baritones, I won’t say that Frank Valentino is the equal of young Leonard Warren, who sang the title role in 1944, but he more than holds his own. In fact, Valentino in this act reveals a fine grasp of the character’s moods and feelings, changing them at various points like a chameleon. The other three singers—Peerce, Merriman, and Moscona—repeated their roles in 1944, and sound pretty much the same, but within these more flexible tempos (particularly in “La donna è mobile,” where Toscanini actually utilizes a slight rubato effect in the second half of each strophe, a performance practice that harks back to at least the era of Bonci and Caruso) his singing is somewhat more relaxed and more engaging. There is any number of such touches throughout this performance, great and small, but the bottom line is that this broadcast has the feel of an actual stage performance, like Toscanini’s 1937 Salzburg Falstaff, whereas the 1944 one has the feel of a “symphonic synthesis on themes from Rigoletto,” which is not the same thing.

As for the transfer, it is immaculate in sound quality. Never have I heard the entire broadcast in such excellent sound, though to be honest the V-Disc issues of the “Pace, mio Dio” and “O don fatale” always had clearer, cleaner sound than the transfers I’ve heard of the whole concert. The only glitch I noticed was a skip in the grooves at the 19-minute mark of the Rigoletto, which surprised me that it was not corrected. Otherwise, this is a fabulous reissue. Many years ago, when RCA finally issued the superior Lucia sextet that Caruso made with Luisa Tetrazzini on LP, the late critic Tom Villella suggested that the far inferior (but more famous) version with Amelita Galli-Curci be permanently retired. I would make the same suggestion for the Milanov version of Rigoletto act III. This is by far the greater and more impressive performance, and I for one will never listen to the Milanov version again except to get a good laugh from her clumsy, over-heavy, matronly Gilda.