“Toscanini had a single absorbing purpose which hypnotized all his associates — the proper articulation of the music of Richard Wagner”- New York Times, 1941

A couple of weeks ago I was contacted by a donor who prefers to remain anonymous, and offered a set of superior transfers of the original NBC acetate discs which make up this recording. With more than one set, covering a number of the side changes, this allowed me an unprecedented choice of material, all of it in a quality and with a frequency range one simply doesn't expect from this era in recorded sound. My correspondent was familiar with the raw transfers, but eager to hear what a Pristine XR remastering might achieve with them.

The result is, for the bulk of the recording, little short of miraculous - only occasionally does the source give itself away to remind you that this is a recording made over 73 years ago. The orchestral and vocal balance is excellent, the acoustic almost ideal, the performances sublime, as the Times reviewer described the following day.

Here we present the full, unedited broadcast, including the interval talk on Wagner. I have tracked the final masters such that those who wish to skip the commentary can easily do so, whilst those who'd rather enjoy the full experience, in unprecendented high fidelity sound quality, may also find their demands fully met.

This release comprises the full, unedited NBC broadcast of the concert of 22 February 1941 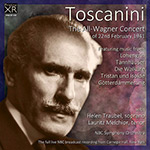 It is perhaps only heroes who can talk with heroes, and this seemed especially evident last night when Arturo Toscanini conducted the NBC Symphony Orchestra in a Wagner program which he discoursed unforgettably in Carnegie Hall, with Helen Traubel and Lauritz Melchior of the Metropolitan Opera Association as assisting soloists.

Both singers were in excellent vein, but singers and players were alike the instruments of Toscanini’s will, and Toscanini had a single absorbing purpose which hypnotized all his associates — the proper articulation of the music of Richard Wagner. He read this music in an overwhelming fashion; everything was fused and unified in his imperious interpretation.

Wherefore the audience entered into the presence of Wagner. There is that in Wagner’s heroic music, and equally in the spirit of this leader, which shakes alike performers and listeners and makes them at least for the moment the greater for the experience.

The circumstances of the occasion were a symphony concert given for the benefit of the Lenox Hill Neighborhood Association and a program consisting of the “Lohengrin” Prelude, the air from Tannhaeuser, “Dich theure Halle”; the duet from “Walkuere,” the Prelude to “Tristan und Isolde,” and the opening scenes, including the duet of Siegfried and Bruennhilde, “Siegfried’s Rhine Journey,” the Funeral March and the Immolation scene from “Goetterdaemmerung.”

These were the offerings. When the orchestra was heard without the singers it was sublimated song, plus the elemental power and the monumental lines of Wagner’s symphonic style. Mr. Melchior sang with a wealth and brilliancy of tone that indicated his exceptional condition and spirits, the authority his experience as a Wagner singer bestowed him, and a sincerity which reflected the earnestness of the leader.

It is also to be noted that Mr. Melchior sang strictly in time. And when it came to “Waelse, Waelse” from ‘‘Walkuere,” where he loves to hold onto the sustained high tones for a time which is at least double their length in the score, he held these tones to their exact values and on observing a little wigwag of Mr. Toscanini’s finger promptly renounced them.

But it was neither exactness of detail nor technical brilliancy which gave Miss Traubel her inspired eloquence. Her “Dich theure Halle” was a warming process, creditable enough, before the duet which she and Mr. Melchior delivered with a fine sweep over the glories and tumults of the orchestra. Notable were the sensitive proportions in this duet and later observed by Miss Traubel in the music from “Goetterdaemmerung." In this way, for once, the shattering climaxes were balanced and proportious and the grandeur of Wagner’s form fully revealed.

We thus heard something more than an excited soprano clamoring against the Bayreuth tubas. We heard, for example, the unearthly pianissimo of “Ruhe, du Gott,” as well as the wild exaltation of the final cry to Siegfried and the welcoming flames. Miss Traubel can well afford so to utilize her resources and reserve her powers. She has in her throat the instrument that can cope with any dramatic demands. Mr. Toscanini, as he so often has done with other artists, seemed to release all her capacities.

The hall was packed, as a matter of course. At the end the whole audience stood for minutes and cheered. Mr. Toscanini, who in these days of horror overseas is not an over-happy man, would fain have disappeared and left to the audience Wagner’s memory, for which he has done all that his genius permitted. But he saw to it that the gentlemen of the orchestra as well as the distinguished artists who stood by him were adequately recognized for their deeds of the evening, and at last the audience went home.

Pristine Audio’s Andrew Rose made this production from a set of acetate radio checks that were donated to him. I have found Rose’s work to be uneven (or, more accurately, his source material has been uneven), but this release is astonishing. My quick check for the success of a so-called “improved” reissue of historic material is to listen to the strings. They sound like bows drawn across strings here, not a gelatinous mess, or a screechy computer-generated facsimile. The overall sound has excellent depth and clarity, if just a bit of compression of the dynamic range, but this is not distracting, certainly not once you fall under the spell of the performance. I happen to own an LP copy of RCA’s 1968 rerelease of the Die Walküre excerpt (which used the infamous “stereo effect” technique), and the difference is night and day. Rose essentially eliminates any background noise.

Collectors of vintage opera, especially Wagner lovers, do not need to be told that this is a legendary collection of artists. I am not much of a believer in “golden ages,” nor am I a Wagnerite in the league of colleague Andrew Quint, but this February 1941 concert performance captures an era when giants walked the musical world. Melchior’s thrilling tenor, captured here in all of its radiant glow, is inimitable. Traubel does not quite match him tonally so well as Kirstin Flagstad, but her voice has an alluring, humanizing warmth that is more down to earth than the rather icy Swedish soprano. Toscanini’s Wagner is delivered in the same, no-nonsense way that he presented Brahms and Beethoven. This aesthetic is the basis of most criticism of the conductor, especially vis-à-vis his great contemporary Furwängler, whose fans considered Toscanini’s manner to be lacking in personality. This, of course, is exactly the point. Toscanini wanted to be the conduit for the composer, and nothing more. His greatness, and it is on full display here, is the technique he employed to achieve this. He was a genius at finding the proper pulse and pace, and in executing the specific direction of the score. A forte is a forte, a crescendo is a crescendo. Of course all of these musical decisions involve some degree of interpretation, but Toscanini always went back to the score to make his choices.

Toscanini’s signature, above all, was his sound. There is always a remarkable lucidity in the playing of his orchestras (mainly the NBC Symphony Orchestra, but it is evident in his exceptional 1930s recordings with the BBC Symphony Orchestra as well), as if you can hear any individual instrument at any given time. It gives his sound a richness and depth that is unmatched. His Wagner has an open-throated power that is unparalleled.

I know that I join several other Fanfare writers in my praise of Pristine’s superb remasterings of so many wonderful old recordings. The productions are bare-bone and a bit sloppy (Melchior’s name is misspelled on the rear cover), but this is not at the expense of the recording itself, which should be snapped up by Wagner lovers and fans of these singers and Toscanini without hesitation.