This is the first in a planned series of Soviet operatic recordings transferred and remastered from Melodiya LP pressings, and as such is a new experience for me. I know the Red Army was able to acquire a good number of German taped recordings at the end of the war, and with them one assumes the technology to play them, but beyond this my knowledge of Soviet recording technolody is very slender.

This recording, made in 1955 in the Bolshoi Theatre, is a fine example of what they could do, and stands equal to any Western contemporary in its technical quality. That said, it remains resolutely of its era, and XR remastering has worked wonders with the tonal quality of the recording. I've also gently relieved a rather dry acoustic that did the soloists few favours.

Producer and Audio Restoration Engineer: Andrew Rose
Cover artwork based on a photograph of Galina Vishnevskaya 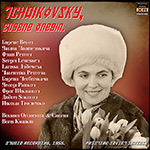 The Khaikin performance retains its position as one of the essential recordings of this beloved opera. This Pristine release is probably the best way to hear it.

This classic 1955 Melodiya recording has been reissued a good many times on CD, twice by Melodiya itself, twice on the Opera d’Oro label, and by Preiser, Myto, BMG, Legato, and Bravissimo. As a performance, it has not been superseded by more recent recordings. Since the performance is a known quantity, the main issue with this release is how it compares in sound quality with other reissues. Andrew Rose of Pristine Audio has obtained remarkable results with many historical recordings. Here he has achieved considerable but not total success. In comparison to the earlier Opera d’Oro release (1999, still available), where the balance is very much skewed toward the upper end, Pristine’s XR Ambient Stereo remastering offers a more spacious, rounded, and realistic sound, with more body on the voices and the strings and more inner detail. (I classify this release as mono because the Ambient Stereo technique does not seek to divide the musical information between two channels but rather to recover hall ambience from the mono recording.) I don’t have perfect pitch, but I note that the timing for the first act is one minute longer in Pristine’s version, and a similar discrepancy exists for the other two acts. Since I know that Rose takes a lot of care in such matters, I would tend to assume that his release is pitched correctly, but this is an issue I cannot resolve with certainty. I think Rose has overdone it in boosting the bass, however, resulting in touches of boominess that are audible right away in the act I Prelude. He also hasn’t succeeded in taming the traditional Melodiya glare on the upper frequencies, which lends shrillness to the female voices in his remastering as well as the Opera d’Oro version. Fortunately, this is less of a problem in Tatiana’s Letter Scene. The dynamic range seems a bit more limited on the Pristine release, noticeable in the peasant choruses in the first act. The Pristine reissue was dubbed from Melodiya LPs and presumably reflects the dynamic characteristics of its source. What source Opera d’Oro used is unknown.

The Bravissimo reissue is part of a very inexpensive 14-disc set, coupled with four other vintage Russian-opera recordings. The fact that its overall timings are identical to those of Opera d’Oro suggests a common source, as do the occasional faint clicks heard on both versions (Opera d’Oro and Bravissimo are both part of the Allegro group). But the Bravissimo sound is better balanced, with a bit less glare on the voices, although still colorless compared to the Pristine. The best of the non-Pristine alternatives I have on hand is Melodiya’s own latest reissue (catalog no. 10 1945). In place of the fullness and richness of sound achieved by Pristine, it offers a brighter, more open sound with greater clarity of texture, a strong but not exaggerated bass, and a wider dynamic range. There is also somewhat less of that high-frequency glare, but the voices seem thinner, lacking the degree of body and solidity conferred by Pristine. The timings are the same as for the Opera d’Oro and Bravissimo versions. It is difficult to choose between the very different Pristine and Melodiya presentations of this venerable recording. I’ll keep them both, but if forced to choose I would go for the Pristine.

As for the performance, Boris Khaikin’s fluent, urgent, and dramatically charged leadership is a major plus. The cast is a reminder that in this repertoire there is no substitute for singers who are accustomed to performing in Russian and completely comfortable with the language, as opposed to those who are coached in Russian pronunciation with greater or lesser success for an occasional Russian role. It allows one to hear Galina Vishnevskaya at the height of her very considerable powers and the great lyric tenor Sergei Lemeshev, perhaps a bit past his prime but still compelling, in what were signature roles for each of them. As Tatiana, Vishnevskaya offers passion, dramatic effectiveness, and a beautiful but characteristically Russian sound with a strong chest register. In the letter scene, she evinces strength and determination as well as vulnerability and longing, leaving no doubt as to how this young girl could transform herself into the regal Princess Gremina of the final act. In his confrontation with Onegin at the Larins’ ball, Lemeshev conveys Lensky’s rage and frustration powerfully but without hysteria. His aria in the duel scene is full of expressive nuance and projects the poet’s utter despair without becoming saccharine, as it sometimes can be. In Gremin’s aria, few competitors come close to the majestic Ivan Petrov, with his combination of unsurpassed weight, solidity, and beauty of tone and moving expressivity. Although less renowned than the others, Evgeny Belov (not “Eugene,” as Pristine, Opera d’Oro, and Bravissimo have it—since when do we translate the names of performers?) is a dignified, proficient, and accurate Onegin, with strength and solidity over his entire range, although his tone is somewhat monochromatic.

The Pristine CDs, like all of the competitors mentioned, do not come with a libretto, although those who order this recording via download get a PDF vocal score. One demerit in Pristine’s production values is that in an effort to make the lettering on the front insert look sort of Russian to the uninformed, Rose has rendered the names of the performers virtually unintelligible to both English and Russian speakers. Some of the characters used do not exist in either the Russian or the Latin alphabet, and where actual Russian letters are used they are misplaced. For instance, the first name of tenor Andrei Sokolov is begun with a Russian “D,” which bears a slight resemblance to an “A.” Mezzo Larisa Avdeeva’s last name gets the same ridiculous treatment. One must turn to the rear insert for a readable listing of the performers, and there is more phony Russian lettering elsewhere in the package. Rose promises that this release is “the first in a planned series of Soviet operatic recordings transferred and remastered from Melodiya pressings.” I welcome the announcement, but I hope that in future releases he will dispense with this kind of nonsense, which detracts from the seriousness and quality of the enterprise.

In 35:2 I discussed some of the stereo recordings of this opera, concluding that I could not recommend a stereo recording and suggesting instead that collectors turn to Khaikin’s mono version. I now find, however, that I was too hard on the 1984 Bolshoi performance led by Gennady Cherkasov, on the Alto label. I faulted the conductor and the sound quality, but on further hearing I think Cherkasov’s leadership, if somewhat cautious, is efficient and precise. The recording, made not in the Bolshoi Theater but in a Moscow Radio studio, is too bright and lacking in bass presence, with balances that sometimes place the orchestra too much in the background, but it still allows one to appreciate the efforts of an excellent all-Russian cast that includes Yury Mazurok, Tamara Milashkina, Tamara Siniavskaya, Vladimir Atlantov, and Evgeny Nesterenko. The recordings led by Semyon Bychkov (Philips or Decca) and James Levine (DG) have some value, but faulty Russian pronunciation by at least some of the principal singers in each case precludes a general recommendation. One stereo recording I had not heard when I wrote the earlier review is the Sony set conducted by Emil Tchakarov, which is better recorded than Cherkasov’s performance. The solid cast, mostly Bulgarian but with Mazurok repeating the title role and Nicolai Gedda as Lensky, has few problems with Russian pronunciation. Anna Tomowa-Sintow is convincing as Tatiana and successfully scales down her voice to impersonate a sensitive, vulnerable young girl, more so than the vocally sumptuous but very commanding and mature-sounding Milashkina. Tchakarov’s pacing is often leisurely, although not as much so as Valery Gergiev’s in this past season’s Met broadcast, and is generally effective, only rarely bordering on the lethargic. True Onegin aficionados will also want the pre-war Bolshoi recording on Naxos, especially notable for the idiomatic leadership of the two conductors involved, Aleksandr Melik-Pashaev and Aleksandr Orlov, the kinder, gentler, less declamatory Onegin of Panteleimon Nortsov, the appealing Tatiana of Elena Kruglikova, and the distinctive Lensky of Ivan Kozlovsky. The sound of Kozlovsky’s voice is something of an acquired taste, but he delivers sensitive lyricism and dramatic power as required. Even in Ward Marston’s remastering for Naxos, however, the sound quality is several cuts below that of the Khaikin recording.

Notwithstanding this competition, the Khaikin performance retains its position as one of the essential recordings of this beloved opera. This Pristine release is probably the best way to hear it.