Fabulous sound from 32-bit XR remastering for this 1954 recording

Having cast around for recording venues, here we find Callas and EMI at La Scala, which would be the favoured stage from then on for her studio operatic recordings. Many of the sonic problems that had plagued earlier studio recordings had by now been overcome, and thus in remastering this recording my main aims in using 32-bit XR remastering to inject life, clarity and depth into the overall sound was considerably less tricky than previously with Callas.

Happily the results do indeed bring significant improvements over the original sound, with Ambient Stereo processing adding a great sense of space and air around the performers - this is my recommended format. 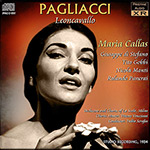 The fact is that she has the personality to have an affair virtually under the nose of her husband, and it is this tigress that Callas brings to life vividly

As with the Furtwängler Fidelio reviewed elsewhere in this issue, I listed this as mono in the headnote because the original recording is monaural, but I heard it in Pristine’s Ambient XR stereo remastering. One should never confuse this with the old “electronically reprocessed stereo” that the major labels inflicted on monaural recordings for many years. Pristine’s “ambient stereo” is a process that creates a stereophonic ambience in the space around the recording. There is nothing artificial or phony sounding about it.

I compared this to my favorite earlier reissue of this 1954 EMI studio recording, that by Mark Obert-Thorn on Naxos (8.111024). While that was a wonderfully clean and vivid transfer, this surpasses it. Andrew Rose of Pristine claims that “ambient stereo processing add[s] a great sense of space and air around the performers,” and that is exactly what happens. The EMI original, and the Naxos transfer, sounded a bit fierce and close-in. Those who love this performance should explore this edition.

I was surprised that I was unable to find a review of this recording in the Fanfare Archive, because it is surely one of the finest recordings of this opera ever made. There have been a number of very good ones, and singer preference will rule most purchase decisions. Bjoerling, Gigli, Tucker, Del Monaco, and Corelli all have their fans (I happen to love them all). As for di Stefano, we know intellectually that he probably shortened his career by taking on roles like this, and one can at times hear the strain, but my goodness this is a performance as good as any. The natural beauty of his sound was still intact in 1954, and he throws himself into the role with complete abandon. “Un tal gioco” is menacing, and “Vesti la giubba” is clearly the statement of a man on the edge of sanity. Some may find it over the top, but I find it utterly convincing and moving. His fury when he comes upon Nedda and Silvio is blood-curdling. He always had an innate feel for the shape of Italian operatic music, and he carries you along with him from beginning to end.

Callas is not a complete success here. Top notes are afflicted with a wobble and a distressing thinness of tone, and one cannot avoid that reality. However, she is so convincing in the role, and so imaginative in ways beyond virtually all other recorded Neddas, that one looks past the problem. Nedda is often presented as a simpering and weak character. The fact is that she has the personality to have an affair virtually under the nose of her husband, and it is this tigress that Callas brings to life vividly. Her scene with Gobbi, as she rejects and mocks Tonio, is astonishing in its dramatic intensity. She is a mistress of vocal color and inflection, and I will put up with a few squally high notes in order to hear Nedda made something other than the cardboard character we usually get. She and di Stefano are particularly convincing in the second act.

Credit must also go to Gobbi as well, always a singer with a brilliant sense of creating a character, never content to just sing the notes. He is in fabulous voice here throughout. Silveri is a fine Silvio, though without the tonal splendor of Robert Merrill, who graces the Bjoerling recording with perhaps the finest recorded Silvio ever. Even the role of Beppe is superbly taken here by Nicola Monti.

Finally, there is the idiomatic and trenchant conducting of Serafin. He was an acknowledged master of the idiom, and manages to find the perfect balance of drama and lyricism, tenderness and fury, throughout. He turns the Intermezzo into a mini-masterpiece.

As is usual, Pristine provides minimal notes and no libretto. But they deserve our gratitude for restoring, with love and skill, a classic recording of Pagliacci that will provide great listening pleasure.