Furtwängler's only studio recording of Beethoven's only opera, Fidelio, took place in Vienna's Musikvereinsaaal between 13th and 17th October 1953, and followed a performance on 12th October in the Theater an der Wien with almost the same cast (Alwin Hedricks replaced Hermann Gallos for the recording).

The recording was certainly well made for its era, though it's no surprise to find most of the dialogue absent in a studio recording of its time. Remastering it has, however, brought far more musicality out of the performance than was previously apparent. In addition to curing some small pitch anomalies (early tape machines frequently drifted up and down in speed), I've used XR remastering techniques to completely open up the sound, with a far more even frequency response than could be captured at the time generating a much more natural tone across both instruments and voices. The lower end is fuller and richer, the top end clear and brighter, whilst the latest digital noise reduction techniques have helped reduce tape hiss without damaging the clarity of the sound.

Ambient Stereo processing has worked wonders to bring our the natural acoustic of the recording venue, and is highly recommended for this recording. 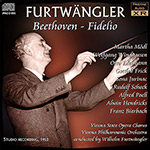 Pristine’s sound is fuller, the voices sound less cramped and less harsh, and the ambience that comes from the XR process is a welcome addition and never intrusive

Andrew Rose’s remastering of EMI’s 1953 studio recording is masterful. Although I labelled it “monaural” in the headnote, because the original recording is indeed monaural, I heard it in Pristine’s XR stereo format. I directly compared it to EMI’s CD remastering (CHS 7 64496 2), comparing individual segments and then hearing the entire opera in both versions. Pristine’s sound is fuller, the voices sound less cramped and less harsh, and the ambience that comes from the XR process is a welcome addition and never intrusive. EMI’s edition is not bad, but the difference is meaningful, particularly over the length of the opera.

However, the question is whether this is the Furtwängler Fidelio to have, if one is having only one. I would say not. The decision was made to eliminate all of the dialogue and record only musical numbers. One problem is that this gives a less-than-complete picture of the drama that is Fidelio. More importantly, while this would be a valuable performance to have if there were no alternative, the truth is that this is somewhat earthbound when compared to the conductor’s 1950 Salzburg Festival performance, well transferred by EMI (CHS 764901 2). That is a complete, live, staged performance from August 5, 1950, and it has the smell of the theater running through from beginning to end.

In comparing casts, the Salzburg comes out somewhat ahead as well. Mödl is excellent here, but she doesn’t have the tonal splendor of Flagstad in Salzburg. Even in 1950, the richness of the Flagstad sound is something of a miracle. Additionally, Julius Patzak is a significantly superior Florestan: more varied in tone and inflection. The remainder of the cast is relatively evenly balanced. Jurinac here, Schwarzkopf there as Marzelline are both superb, Paul Schöffler’s Pizzaro (Salzburg) is more subtly drawn than Edelmann here, though Edelmann has the blacker voice. Anton Dermota’s sound is more appealing in Salzburg as Jaquino. There are slight mishaps that one expects in a live performance, though none are serious.

But it is in the conducting, and overall pacing of the opera that the Salzburg performance really outshines the studio effort. From subtle rubatos to more spontaneously shaded dynamics, it is clear that everyone was “on” that evening, and the result is thrilling. If any performance could accuarately be described as “explosive,” the Salzburg Fidelio is it. The EMI studio sound, as realized here by Pristine, is better, but it isn’t that much better as to compensate for the musical and dramatic edge of the Salzburg performance. Perhaps Pristine will have a go at that one some day.