For Maria Callas's studio career, 1953 set out a working pattern which must have been deemed successful enough for it to be followed in 1954 in almost exactly the same manner. She recorded five full operas for EMI in both 1953 and 1954, and in each case the "middle" recording was a shorter, single-act work. Appropriately enough, the two shorter works in question are frequently linked together: Leoncavallo's Pagliacci, recorded in June 1954, and the present recording of Mascagni's Cavalleria Rusticana, made in June and August, 1953. Three of the soloists appear on both recordings, together with the La Scala orchestra and chorus under Serafin. Yet although they were later paired in reissue format, the two were originally released separately, with Cavalleria Rusticana being possibly the first British LP issue to span three sides, with the fourth side left blank and the second disc sold at a lower price.

As with other recordings Callas made in 1953 there was much to be done to improve sound quality. What began as a dull, flat, lifeless recording has, following XR remastering at the assiduous use of the acoustic properties of one of the world's finest opera houses, totally blossomed. Indeed, in side-by-side comparison it's hard to believe the former could possibly have led to the latter. I've done my best to contain occasional peak distortion in the very loudest sections (this is also apparent on EMI's CD issues so I assume is inherent in the master recording itself). This aside, this Cavalleria now bcecomes a wonderful, glowing artefact, a particularly fine recording. 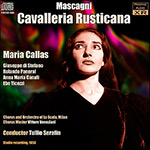 The music comes at you characterised, experienced and weighted with an artistry wholly out of the ordinary

This recording was first issued on LP on Angel Records in 1953. Harold D. Rosenthal reviewed it in Opera magazine in November 1954. Rosenthal admired Callas, but thought Di Stefano was miscast, although he admired his singing of the aria “Addio alla madre.” He also liked Panerai and was satisfied with Serafin’s conducting.

Once again we have a remastering of this old recording, by (no relation) Andrew Rose. Callas sings well. Michael Scott says in a review of the performance that she is an excellent Santuzza, and I agree. Di Stefano is acceptable although his lyric tenor is miscast for a role that requires a dramatic tenor. Panerai is a good Alfio and Serafin is a fine conductor.

As usual Pristine Audio offers no booklet. On the inside of the cover there is a copy of brief notes about the performance from a 1954 review published in Gramophone magazine in 1954, and an explanation of the recording by A. Rose. On the back there is a listing of the bands and advice as to how to receive a full catalog.

The sound is loud and clear. I have not compared it with my original LP recording. It has also been previously released on CD. Anyone who is interested in collecting recordings of Callas and does not have the previous releases is recommended to get this disc. There are many recording of this opera that feature excellent singers and conductors, so this one is for those who collect Callas.

Before discussing the artistic merits of this latest and third LP Cavalleria Rusticana, note the price. Here is Cav. all on its own on three sides, two discs, which means that 33CXS1182 is the first single-sided LP to be issued in this country. People with mixed feelings, noting that the price is appropriately lower, may also regret that the fourth side is not, in fact, an operatic recital by Callas! It may be recalled that this is the case with the Decca Cav., except that there the artist is Del Monaco, which is another story. My view is that the decision not to "inflict" a filler on us shows good sense and is a lead by Columbia which I trust will be followed.

If you bought the second record on its own you would still hear a sizeable portion of an opera which is, so to say, a late starter. Side two starts with the Easter Hymn and side three with Santuzza, after the row at the church door, turning to Alfio and in vulgar parlance "spilling the beans"; followed by Alfio's vow of vengeance, intermezzo, chorus, men's quarrel and Di Stefano's powerful "Addio alia madre". But what I think instantly strikes you is that in the rather conventional opening passage of Santuzza's distress you seem to be hearing the music sung for the first time. Callas is an exceptional artist in this creative artistry if in nothing else. Elena Nicolai (Decca) makes it sound very ordinary; "just another of Santuzza's tearful moments". Milanov (H.M.V.) sings it most touchingly, with a couple of really beautiful high notes. Whether Callas's interpretation strikes you as "beautiful" or not, it is arresting. Just as in her Lucia, whatever the shortcomings, she suddenly caused you to hear some phrase like "Alfin son tuo" at the opening of the Mad Scene where one had hardly noticed it before, so here in page after page of this durable favourite, the music comes at you characterised, experienced and weighted with an artistry wholly out of the ordinary. Against this you must reckon that quite a number of the notes, in an uneven scale, are overloaded, ill-placed or pinched, with an unpredictable or hooty quality. To ignore these may be easier for some people than others, but to deny them in the wish to canonize a superlative artist and raise her above all criticism seems to me impossible. Enough that she makes the solo "Voi lo sapete" deeply affecting, and the quarrel hair-raising and with the superb amplitude of Maestro Serafin's conception, she makes the Easter Hymn sound as one had forgotten it could sound. The tempi are on the slow side by some reckonings, but there is nothing scamped or slapdash about the performance, no suggestion of a bawling match. The chorus are not perfect and the baritone is rather a crude singer. Otherwise the only matter in question is whether Di Stefano is superior as Turiddu to Björling (H.M.V.). He has a natural advantage over the Swede in his ringing and clear enunciation of the Italian text. And though he is not always so stylish or so musical a singer as Björling, he scores several t imes; e.g. right at the start, the Siciliana is more poetically sung - it is Björling's poorest moment; and the Italian's pathos is more elemental. It is finally a matter of personal taste whether you prefer this new version to the H.M.V. It is way ahead of the Decca.