This recording of Die Fledermaus was chosen by Decca to launch a premium-price opera label, and in its original release included a sequence at the end of the second act, Prince Orlofsky's Gala Ball, in which a series of Decca's star singers not otherwise involved in the recording perform a series of songs, including Summertime, I Could Have Danced All Night, Anything You Can Do, and others. Although this sequence appears on subsequent Decca CD issues, it was excluded from their 1962 SXL issue and is omitted here - as the Gramophone critic noted in 1960, for some listeners it would surely constitute "a very considerable disruption of the kind of mood so far established". It can be found, together with the ballet music and a collection of earlier Strauss recordings by Karajan on Pristine PACO070.

My initial aim in this new transfer and 32-bit XR-remastering was simply to see what 21st century technology might bring to a superb, but now 51-year-old recording, if anything. I was delighted to discover the answer was "quite a lot" - more immediacy, vibrancy and sense of dimension that really does breathe new life to a classic. I also noted carefully the pitching, as Viennese tunings traditionally tend to be slightly sharper than the standard A4=440Hz. The recording came off the Decca LPs at A=449.24, but close analysis of residual electrical hum suggested an original tuning of A=445.67, and my restoration therefore adopts this pitch.

*We assume these two are pseudonyms - "oh my god no" and "beef assault" (beef and salt?) if you read them out loud...

Update: We've been reliably informed that: " “Omar Godknow” is Christopher Raeburn (one of the producers and eventually head of Decca Opera Recordings) and “B. Fasolt” is Terry McEwen, who ran Decca/London’s New York office."

From another correspondent: "[B. Fasolt ]is an anagram of the words "Fat slob" in referring to the Decca's man in the USA - Terry McEwen, later to become General Manager of the San Francisco Opera. The unkind description referred to his rather bulky size. I only ever met him once, a not very memorable experience and he came across as rather grand and with his bulk always seemed to be next to you in a room. His gift for recognising voices can be found on a number of Sutherland/Bonynge recordings where one can hear for example early disc appearances by Samuel Ramey and James Morris, even Horne and Pavarotti. Raeburn was very nice and was the most musically artistic of the Decca team." 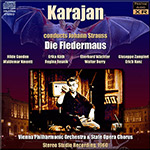 To my surprise, comparison with Decca’s own latest CD incarnation gives a clear advantage to Pristine

This lavish Decca stereo (John Culshaw) production from 1960 famously featured not only the elaborate sound effects for which the company was well known in those days, to enhance the party atmosphere in act II, but also an interpolated Gala performance of star turns from a succession of Decca big names in an eclectic selection of light and what would now be called “crossover” fare. The recording also included the act II ballet sequence, part of Strauss’s score but rarely heard. Previous CD reissues on Decca have retained the Gala but not the ballet (which presumably would have necessitated a third CD). Pristine does the opposite, restoring the ballet but excising the Gala. For my part, I find it an irrelevant distraction and don’t miss it one bit, but for those who feel otherwise, Pristine has released it separately.

At first I was skeptical that Andrew Rose’s XR treatment could do anything for such vintage stereo fare from a major label. But to my surprise, comparison with Decca’s own latest CD incarnation, in its Originals line, gives a clear advantage to Pristine; tuttis are more open, warmer, with sharper detail and imaging. On the other hand, Decca’s sound is a little smoother in quiet passages, where Pristine’s transfer betrays its LP source, though this is a small point. Overall this is most impressive, and given the choice I would now opt to listen to the Pristine.

The performance is a classic that calls for little comment. Karajan’s conducting combines high polish and an idiomatic Viennese quality: an easy authority that is very persuasive, even if his direction is longer on aristocratic reserve, and rather shorter on spontaneous high spirits, than with the Philharmonia in his EMI set of five years earlier. And if he is less memorably individual than Clemens Krauss was with the Vienna Philharmonic in Decca’s 1950 predecessor, so is every other conductor on record. The cast is uniformly excellent (Hilde Gueden repeating her entrancingly earthy Rosalinde from the Krauss set, now 10 years older and a little darker in voice and expression)—with one exception, Regina Resnik’s low-pitched, tired-sounding Orlofsky, who sounds much too old. A major difference from the two classic sets mentioned above concerns the inclusion of spoken dialog, which is most welcome in imparting crucial breathing room to the listening experience. (It is completely cut from the other sets.)

If you have the set in one of its previous CD incarnations you already have the Gala, so you won’t miss it here. But you have to buy the Pristine (or the original LP set) to get the ballet—reason enough to justify purchase, and you’ll get a better-sounding remastering into the bargain. A win-win proposition, and strongly recommended.