The final instalment in Furtwängler's superb Italian Radio Ring, Götterdämmerung offers for much of its duration perhaps the finest sound of the entire cycle. With each act being recorded on a different day, one notices slight changes in quality, and for me the best of the lot technically, from Das Rheingold onwards, is to be found in the second act here. From a musical point of view it is also interesting to assess how Furtwängler and the Italian orchestra increasingly gel through the performances, and listening to Götterdämmerung leaves little doubt that by this point all the musicians, soloists and conductor were performing with a single, unified vision and purpose.

However, this does not mean to say that Götterdämmerung didn't through up a whole heap of technical difficulties to be addressed. As with all the Ring operas I found hundreds upon hundreds of thumps, like someone stamping on a wooden stage. Götterdämmerung was no exception, though inexplicably not all of the acts in all of the operas suffered this, and here Act Two escaped.

Tape hiss too was barely noticed during Act 2, though a major issue throughout Act 3 and here quite variable. Act 2 suffered other short noise problems which, although simple enough to deal with singly, involved again hundreds of individual, manual interventions and many hours of work. The greatest difficulty, though, was reserved for the final act of the entire Ring - extensive sections of repeated treble dropout at approximately quarter-second intervals, repairable only by hand-selecting each section and boosting it sufficiently to smooth it out - a hugely tedious and time-consuming task. Curiously I noticed the same problem afflicting the first 45 minutes or so of the EMI CD transfer of Act 1, yet it was happily absent from EMI's original 1972 LPs used here.

Overall, the end result I hope more than justifies the time and effort spent in restoring it and remastering it. The transformation here with XR remastering has been quite amazing to hear and hugely rewarding - one embarks on lengthy projects such as this without any firm idea of how much success (or otherwise) one might be fortunate enough to witness. To paraphrase Furtwängler's words slightly, and echo them back to the conductor with perhaps some similar feelings after spending several weeks almost entirely immersed in Wagner, "I hope he would have been satisfied with me"! 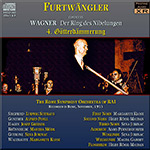 One of Furtwängler’s important skills that is often undervalued because of the cramped quality of many of his recordings is his ear for orchestral color, and Pristine’s transfer allows us to experience that more fully than ever before