Another astonishing 32-bit sonic transformation thanks to XR remastering
"Until now, the best transfer has been EMI - Pristine’s is in another league"

Two CD reissues I've examined closely - EMI in 1990 (reissued without apparent alteration in 2011) and Gebhardt in 2005 - managed between them to reduce the quality achieved by those 1972 LPs. EMI's issue has come under criticism for its dull and rather dead sound, whilst the Gebhardt's choice of equalisation is at best unusual, and the sound quality is - according to one's tastes - either improved or severely degraded by the kind of dynamic compression which more usually graces rock music recordings. The latter, which raises the levels of everything by squashing them all into a smaller dynamic space, has the additional side effect of boosting hiss levels throughout.

Pristine's 32-bit XR remastering aims to avoid these pitfalls: using predictive, ultra-sensitive re-equalisation to tease out of the recording the precise frequencies expected from Die Walküre in the proportions expected of them, it expands the lower frequencies to provide a fuller and more convincing bass whilst extending the upper treble to produce natural clarity and sparkle, whilst avoiding excessive noise or hiss. Although this recording had a number of shortcomings: a tendency to peak distortion in places; a large number of bass thuds and bumps; these have largely been eradicated or ameliorated, and the result is particularly satisfying and enjoyable - especially if you have the Ambient Stereo version! 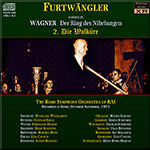 Hearing this set was like viewing a recently restored painting, having not been aware of the layer of dirt on it until you witnessed the effect of its removal.