Toscanini's only recording of A German Requiem

It is unfortunate for students of Toscanini this is the only recorded performance of Brahms' A German Requiem under his baton, as Mortimer H. Frank rightly comments in Arturo Toscanini - The NBC Years: “Not that it is an inferior account; on the contrary, it is magnificent.” The question remains as to whether this would have been Toscanini's interpretation a decade later, or a decade earlier, prone as he was to the constant revision and reinterpretation of his readings.

Certainly this is one of those great performances which goes contrary to the received wisdom that Toscanini was often too inclined to faster tempi – Frank again: “some of his tempos here are considerably slower than the norm. The effect of this approach is to strip away the halo of Victorian sobriety that have hung over many accounts of this score...”. He also notes the fact that the performance is in English and wonders whether this was due to wartime anti-German sentiment.

As the sole recording from Toscanini it is no great surprise that this specially-extended broadcast, the last in a six-programme Brahms season for NBC, has been made available on a number of issues, and one might question the need for another. I was strongly influenced in my decision to at least investigate this recording by the incredible quality of the original transfer supplied to me. For a 1943 broadcast it was exceptionally clean, clear and had a wonderfully extended frequency and dynamic range. It would appear that the transcription was a straight and high-quality dub of near-mint originals, with no interference whatsoever – even the side joins remained undone. In my experience it has been rare to have such strong source material to work on from this period.

But the fact remains that others may have started with similar sources. Thus I decided that it was worth going a step further than I might otherwise do. Naturally the recording received a full XR remastering; this performed wonders on the already clear sound quality, removing perhaps a decade or two from the perceived age of the recording. Then we come, inevitably, to the sound of NBC's Studio 8H. At the time it had recently been overhauled to try and improve the acoustic, and NBC's engineers were busy trying various microphone set-ups to bring out the best in it. But the recording here was rendered nearly dead by an acoustic as dry as the desert.

This is where convolution reverberation comes in, something I've written extensively about before. By effectively placing the recording in the acoustic of a real hall (as opposed to the artificial sound of generic digital reverb), it acquired a new and entirely natural life that was totally sympathetic to the recording. Indeed, I suggest that only the listener used to – and conditioned to – the dryness of 8H would even think for a moment that this is not what the audience experienced on the day (as indeed they might have - depending on how the microphones were hung we may have little real idea as to the actual sound as heard by those attending these concerts.)

The result is for me a particularly satisfying achievement, and one which allows me to be further absorbed in the music than before, when subject to the constant irritant of the original sound and the way it to often made certain sections of the music sound raw and almost amateur in delivery. In short, I believe this is closer to how this performance would have sounded in a real concert hall than has ever been heard before, and is all the better for it. 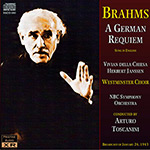 This release offers Toscanini’s only NBC performance of Brahms’s German Requiem and constitutes its second CD appearance, coming six years after an impressive one released by Guild (2290). Neither in sound nor in content are they identical. Differences in the latter are minor, the Guild disc offering more of the announcements that frame this broadcast performance, which is sung in English. But although both releases apparently draw upon a prime source, the sound of this new one is brighter and more forward, a virtue that proves especially welcome in the choral sections. Usually the Westminster Choir, when under John Finley Williamson’s direction (as it is in this performance), produced a rounded, blended sonority, which, although pleasing, often caused a blurring of texture and text. Evidently Toscanini would have none of it, the choir here projecting a clarity that comes far closer to what the Robert Shaw Chorale produced for the Maestro—textural transparency with a clear delineation of the choral lines. Musically, the reading may well surprise those accustomed to hearing the music in another performance. Fast sections are sometimes slower than usual, traditionally slow ones sometimes faster. Although some of the solo singing is not up to the highest standards, it remains adequate. What may surprise many is the exceptionally fine sound of Studio 8H, as heard here. Granted, it remains dry, but with a presence, clarity, and dynamic range never matched in studio recordings of the period. In short, this broadcast provides a stunning walk into history and a prime example of Toscanini’s giving new life and meaning to work that was often thought to be depressingly dreary.