This week (as I write it's 11th June, 2010) marks the 200th birthday of Robert Schumann, and what better way to celebrate the music of this great composer than with a recording of some of his finest work, recorded 101 years after it was written by two of the finest musicians of the twentieth century?

I was rather surprised to find the LP which served as source material for this transfer tucked away in the large collection we recently acquired. Housed in a paper envelope within a protective plastic outer sleeve, it appears from the notes pencilled onto the paper ("Historical value - not hi-fi[!] - heavy rumble[?!]" was one comment [with my punctuation!], "Fully justifies issue" the other) that this was the copy which did the rounds at Philips when they were deciding whether or not to licence the recording for issue in Europe from Columbia. The red tick in the top right hand corner is presumably confirmation that a sufficient number of initials had been accumulated on the sleeve to justify going ahead.

Although dating from the summer of 1941, you'd be hard-pushed to guess the vintage when listening to this remastering. The original, still available in a decent transfer elsewhere, had relatively low background noise, but a musical tone which was strident and rather thin, with a piano that was unrealistic and a voice that was rather too obviously "microphonic" of its era, if you know what I mean.

When I first heard it, this LP sounded an ideal candidate for XR remastering. Carefully-tailored re-equalisation brought from it a truly believable piano and a glorious rendition of Lehmann's voice, the realism of the former being an excellent guide to the accuracy of reproduction of the latter. Careful application of frequency-targeted noise reduction produced an incredibly clean and clear background which is, for the most part, just about inaudible.

It wasn't all plain sailing – there was a tendency to peak distortion in upper frequencies which has been largely tamed though is occasionally still a little evident; there's some pre- and post-echo during sections of the first few tracks still just about audible; I've done a lot of work on areas of swish and the clicks which inevitably arise from any archive disc-based recording, few though these were.

However, I think the end results will surprise many people, just as they've surprised me – once again, it's hard to equate the actual vintage of the recording with the sound one hears when listening to it. A fitting tribute, therefore, both to the composer, Schumann, and to the artists, Lotte Lehmann and Bruno Walter. 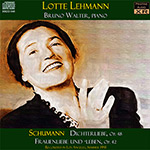