VERDI - Overture to Aida
CASTELNUOVO-TEDESCO - Overture to The Taming of the Shrew
Radio broadcasts from 1940
Total duration: 100.01

Plus Aida Overture première and an unreleased overture by Castelnuovo-Tedesco

The discovery of a new source copy of Toscanini's 1940 Verdi Requiem will be of great interest to collectors. The tape appears to be a straight dub of 16-inch acetate discs, with no editing between sides which (just) overlap sufficiently to create a seamless recording. Italian collector Luciano Crivello acquired the tapes recently and, in addition to making them available to online Toscanini groups in a straight copy transfer, offered them to Pristine Audio for editing and restoration, commenting: "...of this Requiem several were the issues (Arturo toscanini Society, Music and Arts and many others, I have one also with commentaries and the Deum, but the sound is not so good). The material is really very rare and certainly has never been used even by private labels. This material has never been put in Commerce. It seems to me that the previous releases for sale do not have this sound so good, although some were of excellent quality. But there are some points of this record that sound so natural and strong, as I had never heard before."

The sound quality was indeed remarkably good, if at times a little strident and prone to overload distortion during some louder passages. The treble is reasonably extended and it's been possible to remove some background noise as well as to extend and reinforce the bass. Various minor faults and flaws in the recording have been tackled, including occasional pitch instability and small disc surface defects.

The other two recordings included here both date from earlier in 1940 and have been preserved in remarkably good sound quality - both are cleaner and have considerably higher treble response than the Requiem. Whilst it is well known that Toscanini premièred Verdi's discarded overture to Aida at the 1940 concert of March 30th, it has been impossible at the time of writing to find out much about the Castelnuovo-Tedesco overture.

The composer had been supporting of Toscanini in Italy when the conductor was under scrutiny by Mussolini, and eventually was forced to flee to the United States, where Toscanini sponsored his relocation in 1939. The overture was played twice in concerts given by Toscanini and the NBC Symphony Orchestra (the second performance, on 3rd March 1944, is also available on CD), and in 1945 Toscanini also gave a single performance of the Castelnuovo-Tedesco's overture A Fairy Tale. I have failed to locate any other recording of the present Taming of the Shrew Overture, nor any further information about the work.

As such it is impossible to state whether this is the overture's world première, its broadcast première, its US première, or indeed, all three - or of course none of the above. Should this or any other pertinent information become available I will of course update this page. Alas my recording of the work contained too little rapidly-faded applause to include here - suffice to say, therefore, that the audience response was certainly positive, and not the silence implied by the present transfer. 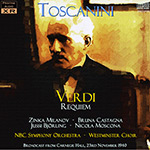 This new Pristine edition is the finest I have heard

Especially compelling is his 1940 NBC broadcast of the Verdi Requiem. This has, of course, received a good transfer from Music & Arts, but this new Pristine edition is the finest I have heard, one that does full justice to Toscanini’s conception. Almost sonically competitive with his 1951 RCA edition, it features superior soloists and somewhat greater flexibility.